Wake up and smell the Hampton Coffee Company in Aquebogue.

Well this is it! Goodnight everyone and please join us tomorrow from 6am-6pm for our Super Secret Preview Opening of our #Aquebogue cafe. Free coffee and espresso drinks, photo booth fun, and prizes for our Friends, Family & Fans only. #weloveourfans #localcoffeecomestoriverhead #drinklikealocal

Forgive the pun, North Fork coffee lovers, but you’re going to like this news a latte. On January 17, Hampton Coffee Company opened its fourth espresso bar and café in Aquebogue. The shop — originally a 1940s-era garage and service station that has been lovingly preserved and repurposed and features plenty of green technology — is the company’s first North Fork location.

“Our fans have been asking us to come to Riverhead and the North Fork for literally five years now. We get asked all the time,” says Jason Belkin, co-owner of the company. “So many of our South Fork customers live on the North Fork and come south for work or the other way around. And so many of our customers are local tradespeople from both forks, so they service customers throughout the East End and wanted to be able to stop at a Hampton Coffee no matter where their job would take them that day. Now that we opened on the North Fork, we really found out how true this really is.”

The café — already bustling — offers all of the Hampton Coffee favorites: their scones (baked-on-premises), Hampton Classic Blend coffee, and plenty of fresh, homemade options for breakfast and lunch. The Aquebogue outpost has a new and exclusive signature blend: the Organic North Fork Blend. 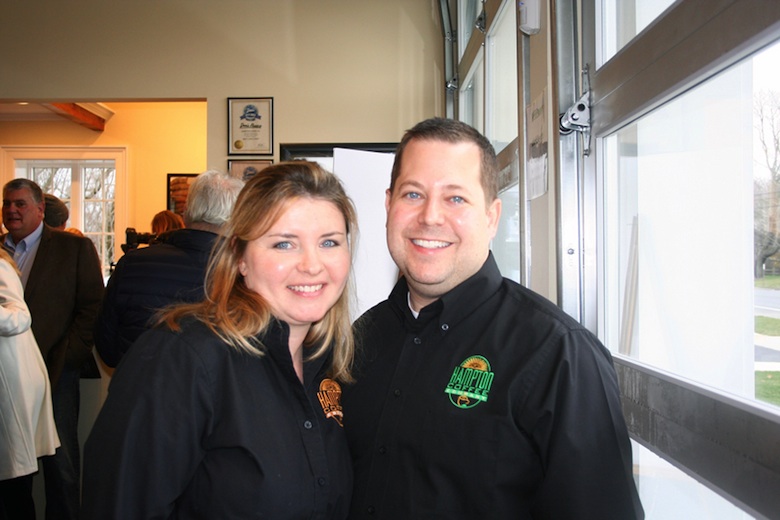 “While all our cafés have a similar menu of coffee drinks and food, each has its own personality,” says Belkin. “Our Aquebogue location is a 1940s service station and garage so we kept everything exactly the way it was in the ’40s and worked around it to bring it up to Energy Star standards. Even some aspects that were lost over the years we reclaimed, like the gooseneck lights over the sign out front. They were in the old photos, but they must have come down in the ’70s, so we incorporated the old style back into our renovations. Our North Fork café is participating in Single Stream Recycling, so everything that goes into the garbage here gets recycled right here actually, locally on the North Fork. About 90 percent of our goods and supplies comes from fellow Eastern Long Island purveyors.”

This commitment to sustainability and localism is part of what makes Hampton Coffee Company so special. One-hundred percent of the eggs they use are cage-free. Their staff is made up entirely of locals. They support more than 100 different local charities each year.

Hampton Coffee Company’s Aquebogue café is open from 6 a.m. to 6 p.m., though it will stay open later in the summer. For more information or directions to the café, visit their website here.