I’ll tell you what we were eating. We were eating cream cheese and canned stuff and leftovers.

I turn 50 on Sunday. ? So we had a party last Saturday, all girls, half of whom I went to high school with. Two of those I knew in second grade. It was so much fun. Dancing on the furniture, drinking wine and negronis and laughing our asses off. A good part of the laughter was directed at a cookbook from the 1975 Strawberry Jamboree, which was held every year as a fundraiser, I guess, at my grammar school, Glenwood, in Short Hills, N.J. My friend Libby Welch, who has a laugh you cannot not join, gave me the book as a present. (She found it in her house and gave it to me! How nice is that?)

We turned the pages looking at the names of our mothers, who had submitted their favorite recipes, and cheered those whose mothers were included. (What up Maureen Hoare!) And remembered the mothers we lost. We hooted at the typewritten text. Marveled at the binding job, which obviously meant someone’s mother had hand punched all the holes and then had to tie the whole thing together with yellow yarn. Who does that?

We hollered at the ingredients: cream cheese was in everything; lots of Worcestershire sauce; very good showings by canned fruits (I still love Mandarin oranges), vegetables and soups; gelatin was in hors d’oeuvres and desserts; and there was less catsup than I expected. One man contributed to the book. Mr. Navarino, the principal, shared his recipe for Strawberry Trifle: 2 pkgs. unfilled lady fingers, 2 jiggers brandy, frozen strawberries and fresh strawberries, whipped cream and slivered almonds. Not bad, but I doubt I’ll make it.

There were five recipes for sweet and sour meatballs, which took good advantage of that catsup and well as grape jelly. Naming dishes after faraway exotic places was a trend — Pork Chops Monterey — as was adding Surprise, Delight or Supreme to the end. Those words don’t sound too appetizing now. The recipe for Coca-Cola Salad is below. N.B: you grate frozen cream cheese on top. The marinated roast beef salad recipe is a bonus. 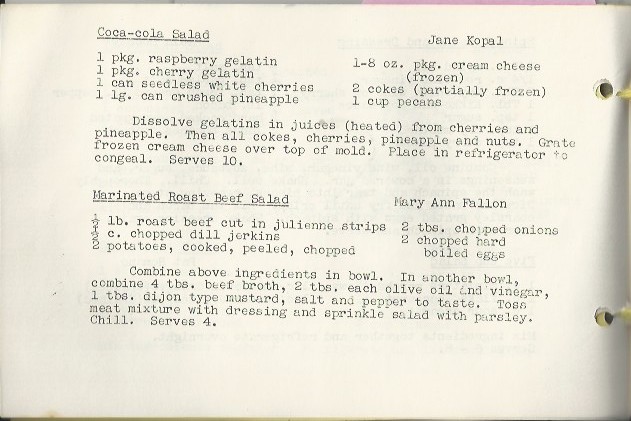 The a hoary head of PC raised itself once: Oriental Stuffed Steaks — I’m looking at you Mrs. Issacson — called for  a package of wild rice, green onion tops, teriyaki sauce and a slightly beaten egg. Asian was not part of our vocab then. But soy sauce was in the avocado colored fridge; my sister still marinades her flank steaks by mixing it with brown sugar. The neighborhood feeding Glenwood was not that diverse. There’s no sign of Mexican food. There’s one recipe with “Italian” in the name and it must be because it contained oregano. Kraft Italian dressing, however, got poured over more than one dish. An English trifle called for 1 pkg. Birds Eye custard. I was afraid the Leprechaun Quiche was going to have green food coloring, but it was just a cooked 10 oz. package of creamed spinach.

Inconceivable now are the tuna burgers. They were made with canned tuna mixed with mayo, onion and chopped American cheese, put on buns, wrapped in foil and then baked for 20 minutes at 350 degrees. And the Texas Straw Hats by Faye Adams. You ready? “Make a sauce according to the directions on the back of a Sloppy Joe mix — one pound hamburger, one small can tomato paste, one and half cups water. Serve this sauce over Fritos and top with shredded cheddar cheese. Very simple, attractive and tasty summer supper.” (Emphasis mine.) Texas straw hats? Are we hinting a Mexican food here? What? But I do love Fritos.

Now this I like, a recipe that starts with “chilled leftover roast or steak.”  Our grandparents vividly remembered the Depression. No one threw out food. And our parents internalized it. I remember my mother using a tea bag twice. Please don’t throw out food. Please eat leftovers. It’s No. 3 on this list of what you can do about global warming.

There were fresh veg! Thanks Rita Tobin for using “yellow crookneck summer squash” in your cheddar squash bake, after you boiled it whole with the skin on. One recipe called for fresh okra. Where’d you get that in suburban New Jersey?

There was a star of the book, Ruthie MacPherson, who went on to publish her own cookbooks and who I still mix up in my mind with Ina Garten. (I have a signed copy made out to my mom and dated 1981.) (!) She not only identified brands to purchase but where to buy them. (Here’s to Sells Liver Pate, still available at fine groceries everywhere!) Check out her Easy Pate below.

Cheers to Sue Phillips for sharing the credit and this brassy embrace of fat to make Kentucky Fried Chicken: “half bacon grease and half lard.”

There were two recipes for Strawberry Romanoff, both of which called for Grand Marnier, one of which was by my mother, Jean Duffy. I’m kinda proud of her that orange zest was included to boost that orange flavor. 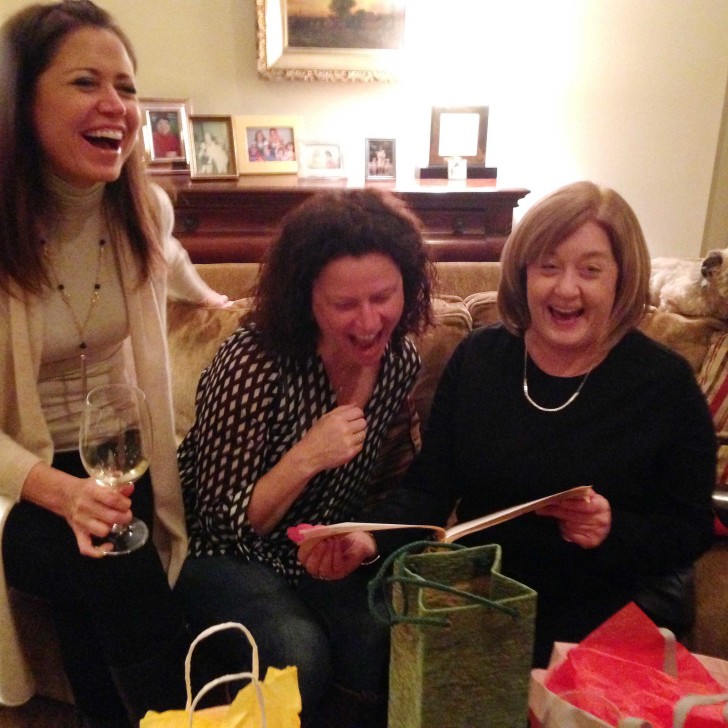 From left, my sister, Elizabeth Murphy, me and Libby.