Looking to eat your heart out for a good cause? On Saturday, January 30, Love Bites returns to benefit Katy’s Courage and the Scarlett Fund.

When 30 of the best chefs and caterers in the Hamptons come together to support two incredible charities? That’s amore.

It’s also exactly what happens at the annual Love Bites benefit, which returns Saturday, January 30, to the Muses in Southampton. Set to support The Scarlett Fund and Katy’s Courage — and featuring so many Edible favorites, from chef Joe Realmuto to chef Peter Ambrose — Love Bites is an event you won’t want to miss.

“We are honored to be a part of this year’s Love Bites,” says Jim Stewart, founder of Katy’s Courage and father of Katy, whose brief but beautiful life is honored by the charity conceived in her name. “We’re working constantly to get the word out; it’s a labor. So when I was out camping with my son and got a call from Peter Ambrose about doing this, I was thrilled.”

Thrilling, too, is the magnificent work Katy’s Courage is doing. They raise money for local scholarships, pediatric cancer research, and their Katy’s Kids program at the Children’s Museum of the East End, which meets on the first and third Wednesdays of each month.

“When Kate died, we knew that my son, Robert, who was six at the time, was going through what a brother would go through when his sister passes away,” says Stewart. “So we were looking for something to help him and, really, all of us.”

A friend suggested he and his family visit the Children’s Bereavement Center of South Texas. Their experience there, says Stewart, was “transformative.”

“We went back and I said to them, ‘I just want to pick you up and bring you home,'” says Stewart. “They laughed and said, “You have to go to the Dougy Center in Portland.'”

So off Jim Stewart and his wife, Brigid Collins, went for their training — training they brought home to the East End, and are now working to pass on to volunteers for their Katy’s Kids program,  training you can support by attending the Love Bites benefit. 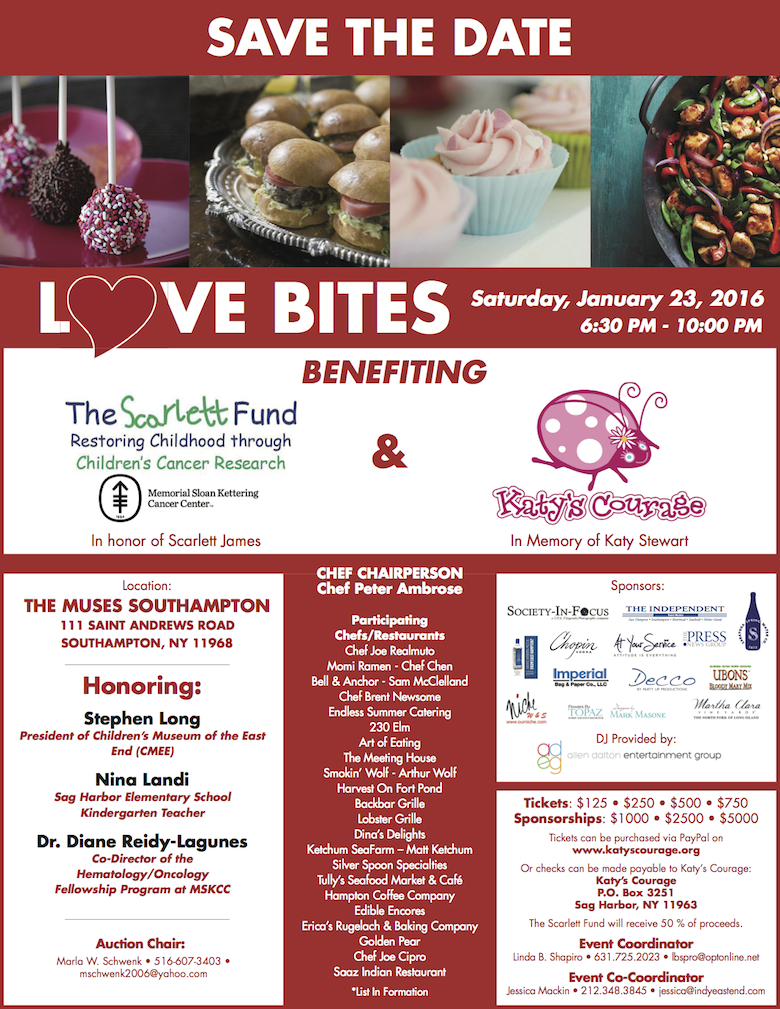 “Katy’s Courage is our cause,” says Ambrose, chef chairperson of the event. “It’s for the people of our community. It’s done more to heal our community than it has for Jim and his family. We thought it would be a good fit along with the Scarlett Fund.”

Also good, of course, will be the food.

“I’m going to do a pulled pork and purple potato hash,” says Ambrose. “Other chefs will be doing everything from cured striped bass to mini steak tacos, mini grilled cheese sandwiches [made with bread from Carissa’s and cheese from Mecox] to duck.”

And because it’s winter, you won’t have nine different versions of gazpacho!

Martha Clara will supply the wine.

“It’s going to be a great event,” says Ambrose. “It’s a chef expo with 30 of the best chefs and caterers in the Hamptons, and because it’s winter, you won’t have nine different versions of gazpacho!”

UPDATE: Love Bites has been postponed due to the impending snow storm. The event will now take place on Saturday, January 30.