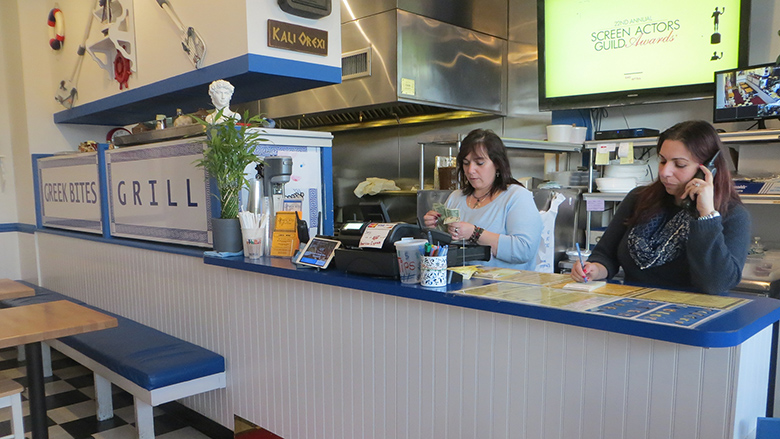 Step inside Greek Bites Grill and Cafe’s newest location in Mattituck, and you’d be forgiven for thinking you were on the island of Corfu. From the authentic yellow fishing lines — from the owner’s cousin — that drape the walls to the blue and white color scheme, the décor transports customers to the Mediterranean.

“It has something from home,” says Dimitra Laopodis, who opened the restaurant with her husband, Spiro, in January 2015. A Greek-American, Laopodis was raised in Philadelphia until she was 8, when her family moved back to Corfu, off Greece’s northwest coast in the Ionian Sea.

“I’ve been in the restaurant business since I was a little kid,” Laopodis says. Her parents owned a diner in Philadelphia. When they moved back to Greece, they opened a restaurant that catered to summertime tourists. “It’s in the blood.”

She remembers busing tables and joking with the customers when she was 13. She adds, “That’s how it is with a family business, you help out.”

When she was 19, Laopodis moved to the United States with Spiro. Her sisters and brother now live on Long Island as well, while their parents split their time between the two countries. She says, “America always had this thing for us.”

“I’m in a shopping center where there is a Subway next to me and a Chinese food place nearby,” she says. The multiculturalism and “the fact that hard work is rewarded” are two things she loves about the United States. Although she loves Greece, she didn’t want to raise her family there; she believes there are more opportunities in America.

Her two children are familiar faces at the family’s first-location in Moriches. Although the restaurant, opened in 2007, only has seating in the summertime, it is bustling.

Telling how her son uses Windex to clean the outside tables, she laughs, remembering a scene from Hollywood hit, “My Big Fat Greek Wedding,” where the father uses Windex for everything. Although she admits to using it a lot, she says, “I’ve never used it for pimples,” referencing the iconic scene in the movie.

When the couple moved to the United States together 20 years ago, they lived in Astoria, Queens, because Dimitria wanted to be near other Greeks. They worked their way up in the restaurant business in Manhattan until Spiro became a partner at Trata in Southampton, which prompted the move to the East End.

After a few years, they decided to open up their own restaurant: Greek Bites Grill and Cafe in Moriches. They thought the location was perfect, because it’s in the middle of a few smaller towns. When they picked their new location on the North Fork, they used a similar strategy.

“I know that once they try the food, they will come back,” says Laopodis. Some of the customers favorite dishes include their mousaka and pastitsio, which Laopodis says is like a “Greek lasagna.”

“The Greeks have an expression that you cook with your hand and your eye,” says Laopodis.

Her favorite dish is the authentic Greek style pita. Think a charred, thick pita wrapped around meat of your choice with tomatoes, onion, their famed tzatziki sauce and, most importantly, fries smothered in a red sauce. In Greece, Laopodis says, gyro’s usually come with fries, and every region adds its own special sauce in addition to the tzatziki. Corfu is known for its red sauce, which is thinner than marinara.

“The Greeks have an expression that you cook with your hand and your eye,” says Laopodis. Sometimes she will give customers recipes, but always warns that much of process is learned. It is about taste, how you whip ingredients together, and love, she says.