6 Wine and Food Pairings to Try This Winter

Madison Fender took her camera to some restaurants on the East End accompanied by Julia King of Premium Wine Group. With the chefs, they came up with dishes that pair well with Long Island wines. 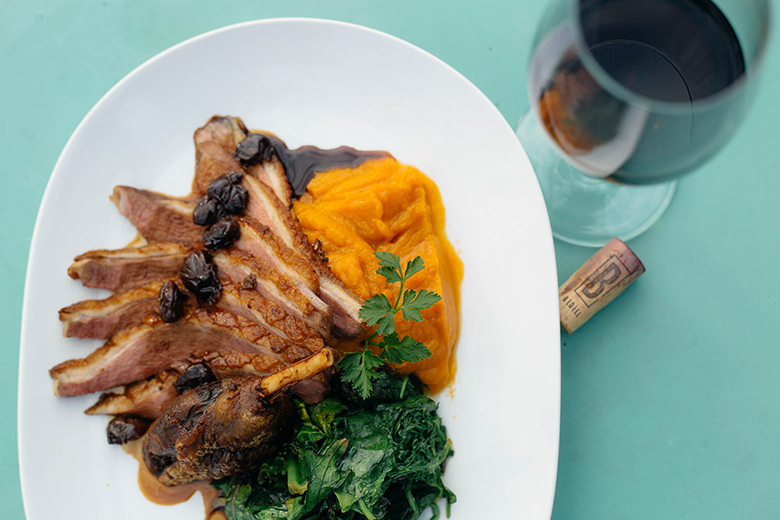 On the main drag between Bridgehampton and Sag Harbor, Fresh Hamptons is the spot to go for good clean eating with the wines to match. Chef Todd Jacobs served us his succulent version of Long Island duck from Raleigh Farms. The oven roasted duck was accompanied by a crisp duck leg confit drizzled with a cabernet franc and cherry reduction. Nestled next to the duck was pureed local sweet potatoes with freshly steamed kale. The earthy savory character of the duck and the sweet pops from the cherry reduction made the 2010 Bedell Merlot a perfect match: tobacco and mocha aromas give way to hints of cranberries on the palate; this is a winner every time. 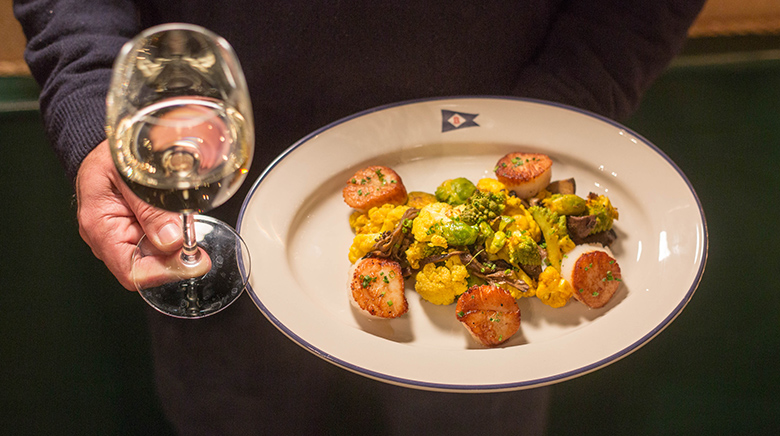 Barons Cove is a newly renovated restaurant and hotel on the bay side of Water Street just past downtown Sag Harbor. This is a favorite spot among friends to cozy up by one of the three fireplaces while enjoying the beauty and bounty of the East End. I was greeted by Chef Matthew Boudreau with a plate of Montauk sea scallops harvested off the coast between Montauk and Block Island that were lightly pan seared and brushed with lemon vinaigrette. The scallops nested in a colorful array of cauliflower, Brussels sprouts and mushrooms all grown at farms including Satur Farms and the East End Mushroom Company. The 2014 Wölffer Sauvignon Blanc was a no brainer to pair with this delectable dish. Its tropical fruit character and stony minerality brought out the natural essence of nature’s “sea candy.” 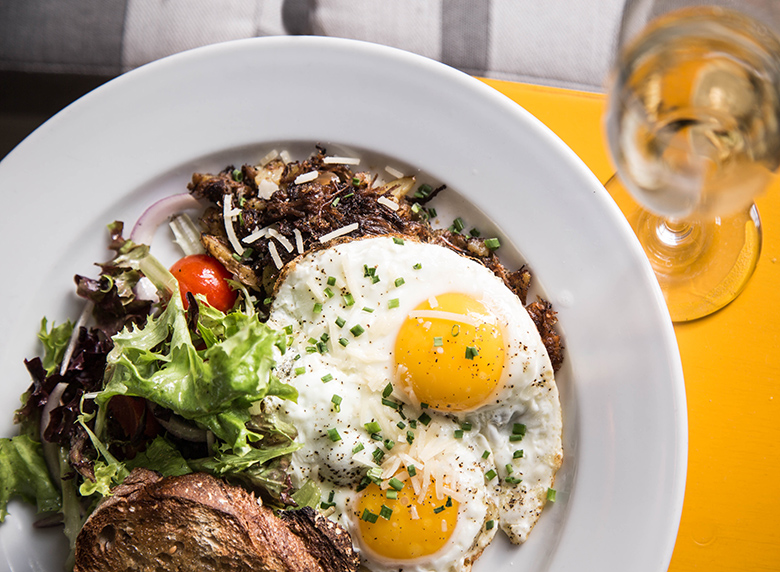 Local wine isn’t only good with dinner; try it with brunch at American Beech, the charming new restaurant and inn in the harbor town of Greenport. Chef Ariel Ferrara started my day off right with a sizzling plate of short rib hash topped with two friend eggs along side local greens and country bread. The feeling of cutting into this dish was similar to the joy a child feels on Christmas morning. The hash is a blend of slow braised short ribs, fingerling potatoes and caramelized onions with a perfect outer crust that when cut into reveals a tender center quickly doused with perfectly runny egg yolks. After all of that sensual flavor I had to cleanse my palate with the 2011 Lenz Cuvée, a sparkling wine made in the traditional method, refreshing. 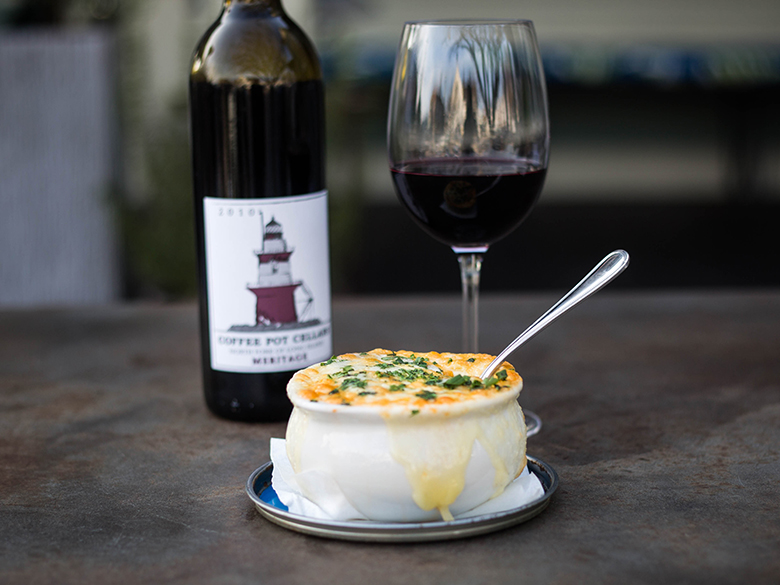 If you ever “Find Your Way” to First and South restaurant, the, “We support the French” onion soup is a MUST TRY! At only $8 a bowl, this delicious mix of local mushrooms, leeks, tomato puree and fresh herbs is topped with a giant garlic crouton and bubbles over with creamy white cheddar. This dish is gluten free and also vegetarian friendly. The experience of the first cut into this dish is like no other. Chef Scott Leventhal nailed this dish and the flavorful satisfaction will have you craving it all winter long.  This complex soup deserves an equally complex wine: the 2010 Coffee Pot Cellars Meritage. On its own, this wine tastes of luscious black cherry, fresh cracked pepper and ripened plums with a blanket of forest floor and a backbone of tannin that stands tall against the cheesy soup. When consumed together they waltz around your mouth like Ginger Rodgers and Fred Astaire, an unmatchable duo. 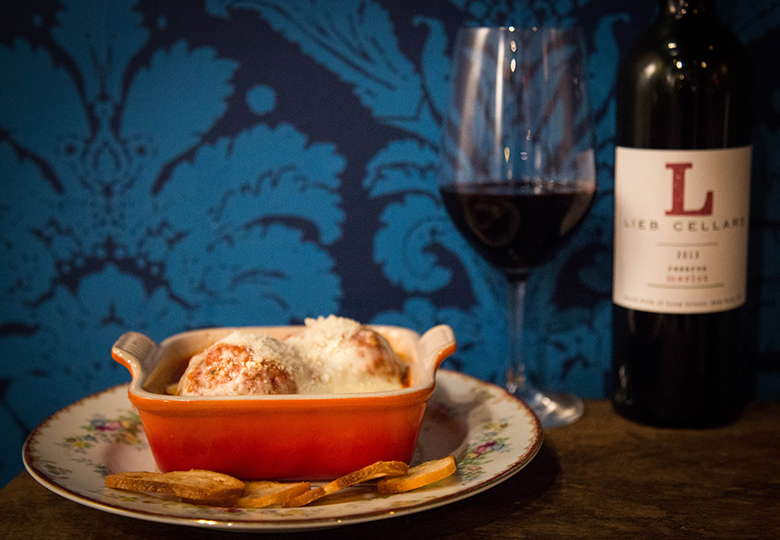 A specialty cocktail bar is an unlikely place to find some of the best meatballs on the North Fork, but be prepared for amazement. Below the town of Greenport in a cozy speakeasy style basement, you will find locals sipping and eating all year long. Brix and Rye serves the culinary specialties of Matt Michel of 1943 Pizza Bar. These meatballs are Michel’s grandmother’s specialty, and we thank her. They melt in your mouth and are big enough to share, but so good you may want them all to yourself. The hearty robustness of the meatballs in their juicy red sauce leaves room for an equally round and fruit forward wine that still has the tannin to coalesce nicely with the stringy melted cheese. Lieb Cellars 2013 Merlot has just the right amount of soft fruit and tannin. 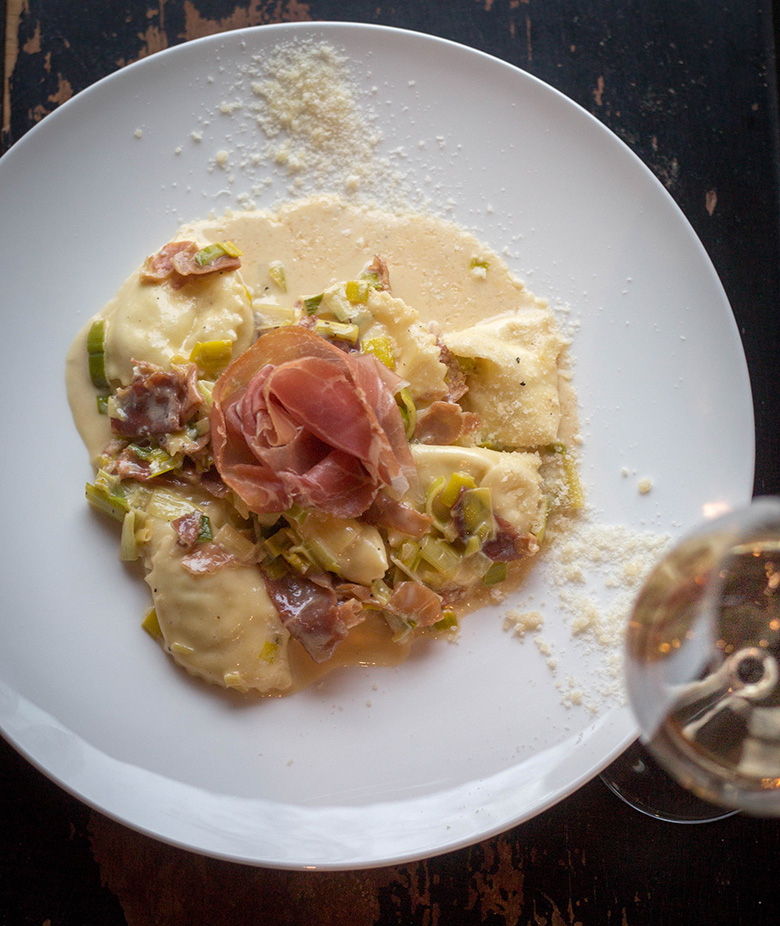 Chef Marco Pellegrini, an Umbiran native, is truly an artist in the kitchen. He hand made each of these buffalo ricotta ravioli and combined them with speck and local leek cream sauce to create a heart warming full bodied winter dish. The salty and smoky speck contrasts with the sweetness of the leeks and blends elegantly with the creaminess of the sauce, which coats your mouth with layers of flavor. With the help of the brightly acidic and fruity Bridge Lane White Merlot to dissolve the weight of the cream sauce, you might just ask for seconds!