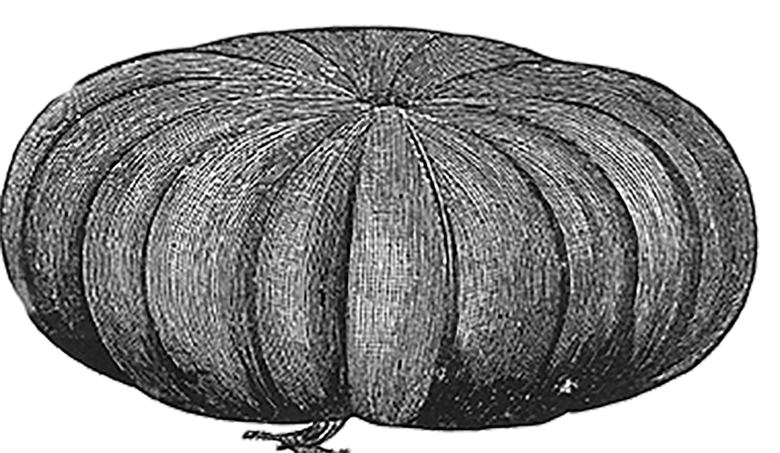 An illustration of a cheese pumpkin from the 1888 Henderson seed catalog.

Once nearly extinct and completely absent from seed catalogues, the Long Island cheese pumpkin is making a comeback. The squat tan squash, which resembles a wheel of cheese, is now featured prominently at most farm stands in the fall and is being used for more than an ornament on top of a bale of hay on your front porch. People are cooking with it. I bought one before Thanksgiving at the Fruit King stand in Westhampton Beach, which is run by the Olish Family, and a woman who works there got excited. “Are you going to use that to make a pie,” she asked.

One down! No need to work on the Olishes as part of my mission as an ambassador of the Long Island Cheese Pumpkin Project.

The project, conceived by Steph Gaylor, who runs the Long Island Seed Consortium with partner Cheryl Frey (their annual seed swap is coming up on Feb. 13), and Laura Luciano, a cheese pumpkin fanatic and Edible contributor, was birthed on December 17 with a meeting of likewise pumpkin fans at the Riverhead campus of Suffolk County Community College. (The fans included Beth Motsenbacher and Herb Strobel of Hallockville Farm Museum; Kathleen Masters and Jess Engle of Amagansett Food Institute; Jeri Woodhouse and Pierre Friedrichs of Slow Food East End; Elilzabeth Takakjian of Edible Gardens and Cornell, and Gaylor, Frey, Luciano and me.)

“There’s been a flattening of diversity of winter squash,” said Gaylor, an avid and evangelical seed saver and seed historian, “it’s all acorn and butternut.” Gaylor wants to change this and make the local moschata the go-to culinary squash for Long Island.

The squash’s benefits are numerous: they’re easy to grow, contain bright orange flesh, are less stringy than jack ‘o latern pumpkins and contain high amounts of beta carotene. And — and this is what’s crucial to the project — they’re local. According to Gaylor a cheese pumpkin grown on Long Island tastes better and is the ultimate example of what a cheese pumpkin can be. This is because it’s a heirloom variety, open pollinated and selected for our soil, our weather and our climate. We all know there’s a difference between Long Island merlot and merlot grown in hotter regions like the Central Valley in California.

But think about Napa Valley Cabernet; no one makes cabernet like they do in Napa. Think about onions; no one grows onions that taste the same as those from Vidalia (which is a brand). Think about San Marzano tomatoes, which are grown on soils laced with the ashes of Mount Vesuvius. You can grow a tomato on Long Island that looks like a San Marzano tomato, but it will not taste like a San Marzano, something Italian growers, with the help of the European Union, regulate and defend rigorously.

We advocate for the dynamic use of this regional pumpkin across a broad spectrum of organizations creating a coalition that includes chefs, growers, schools and eaters.

So the San Marzano is a protected name for a paste tomato grown in a certain region in Italy. How do we do that for a squash grown on Long Island? “People have to eat it,” says Gaylor. From the project’s mission: “We advocate for the dynamic use of this regional pumpkin across a broad spectrum of organizations creating a coalition that includes chefs, growers, schools and eaters.”

Want more? We envision reclamation and adoption of the Long Island Cheese Pumpkin into the culinary vernacular. Widespread appreciation and cultivation of this local variety will lead to local seed saving that fosters terroir.

And to finish: Values: Empowering people to communicate and champion their constituents the culinary use of this regional variety. Fostering collaboration and transparency among groups for the common cause of initiating a true regional brand.

So what comes first? Do chefs cook it, or do people ask for it? Or do farmers grow it? It’s a bit of a chicken-egg problem, but as eaters, readers of Edible can ask about it when they eat out; inquire at farm stands while remembering the cheese pumpkin is in season starting in early fall, and take them off that bale of hay and put them in the oven.

Stay tuned for recipes and a pledge you can take to help the project’s mission. And show us your cheese pumpkins! #licpp (Long Island Cheese Pumpkin Project).