New Year’s (or Any) Celebration Meal

An impromptu New Year’s leads to eating like the old days. 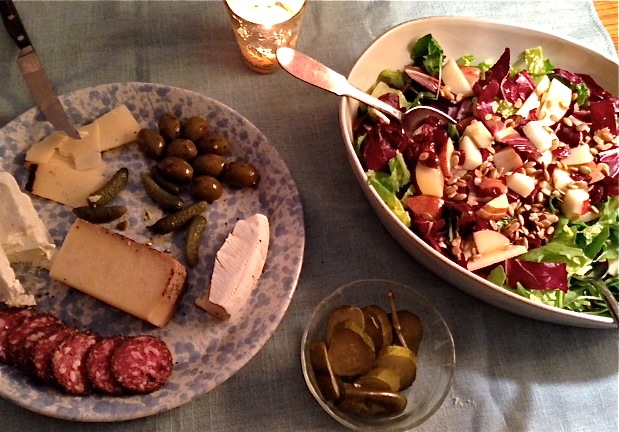 On rather a happy whim, three of our dearest friends, who usually come out for Thanksgiving, decided to spend New Year’s Eve and day with us. We love to cook when we all get together but normally my husband and I go out for dinner on New Year’s Eve. I’m glad those plans changed because I’m not sure we would have had a better meal had we dined out.

Fearing a lengthy and complicated roast-type supper, my clever friends opted instead to show up with nearly-ready items in hand; I supplemented with a few things still actually growing in my garden or easily had in town. It ended up being a meal full of international flavor, bold color, and cheer, one yielding copious leftovers that were easy to snack on or turn into other meals at all hours over the following two days. It was the kind of supper that reminded me of late-night meals common to 18th and 19th century parties large and small (which I often write about in my stories and novels), but one I now feel free to offer guests in this current century, especially on a cold winter’s night.

Such a meal should consist of room temperature or warmed meat: preferably sausage of any type, or sliced beef. With this is served several cheeses, chunks of crusty bread, pickles of any type, a dipping sauce, a savory pastry, and a large salad with fruit. Our own New Year’s Eve meal included long thin links of Bavarian sausage procured from a butcher’s shop in Queens and grilled on our still-uncovered barbecue outside, as well as herb-encrusted salamis, olives and local cheeses from Cavaniola’s in Sag Harbor, my mother-in-law’s homemade pickled cornichons, a sampling of sour and spicy pickles from Backyard Brine in Calverton and McClure in Brooklyn, a red-pepper dipping sauce (tomato dipping sauce would have been just as perfect), a salad made from kale, arugula and radicchio with feta and sliced pear, and a spiral-shaped spanakopita.

By the time midnight came, we were all duly stuffed and satisfied. For breakfast, eggs were added to the pastry and crusty bread, and for dinner the salad and sausages were added to a make-your-own sandwich spread.