The developmentally disabled have become working farmers for a coming network of farms.

On a bright morning in September a crowd gathered at a greenhouse/farm on an arid stretch of Montauk highway to cut the ribbon on the first Smile Farm, a farm whose employees are among the 20 percent of adults with developmental disabilities in this country who have jobs. A coming network of Smile Farms hopes to raise that percentage one plant at a time.

The farm, which grows ornamental plants and microgreens, is owned by Independent Home Group Living, a nonprofit that provides housing for developmentally disabled adults. Jim McCann, CEO of 1800Flowers, has long been an active supporter of IGHL; his brother Kevin lives in one of the houses. 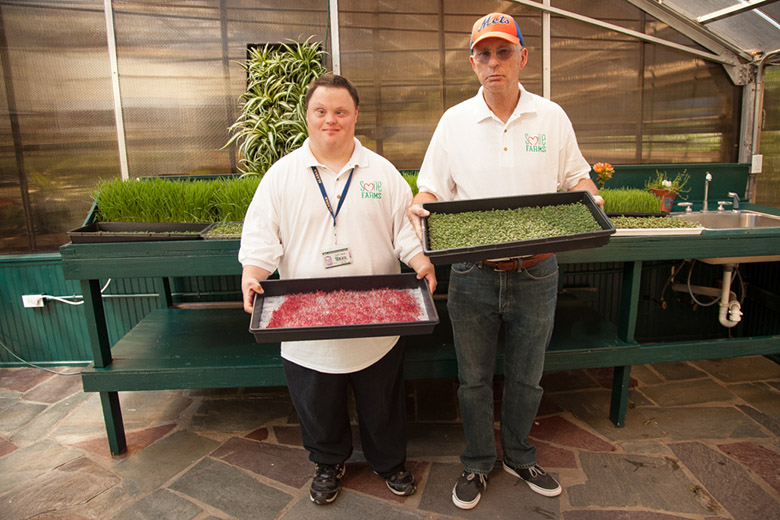 Keith Captuo, left, and Kevin McCann in the Smile Farms greenhouse with some microgreens.

And now he’s a farmer, getting up, going to work and going home with a paycheck. He works alongside Keith Caputo, who has been an IGHL resident for 13 years. “I like putting my hands in the soil,” says Caputo. “I shovel it, turn it over, and then it’s time for a 15 minute water break, because you get hot, sweaty and dirty.”

Caputo is easily the most voluble of the farmers, because seeds and soil are not his only busines. He has his own charity, Helping Makes U Happy, (like his Facebook page). He’s helped provide $500 scholarships to high school seniors committed to volunteering; donated thermal totes to Stony Brook Hospital for mothers of premature babies and 200 hats scarves and gloves to the “less fortunate in our area.” He does this by organizing raffles, a community yard sale and Chinese auctions. 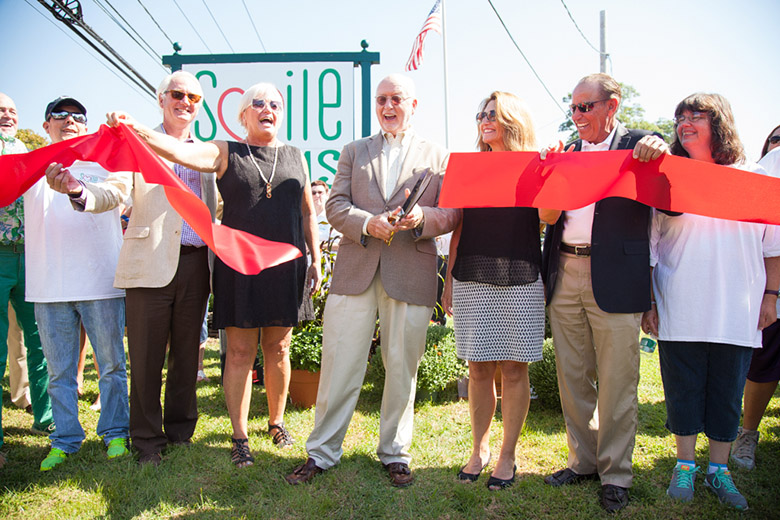 But among the farmers at Smile Farms, Caputo is just another guy getting sweaty for a paycheck. At the ribbon cutting he and his coworkers gather around McCann and his family, who created Smile Farms in 2014 because Kevin had started to age out of other opportunities, a situation they know happens all the time. The group is exultant, clapping as the giant scissors shear the wide red ribbon. Behind them tables are being set up for a gala fundraising dinner to kick off the project. Homegrown microgreens are on the menu.