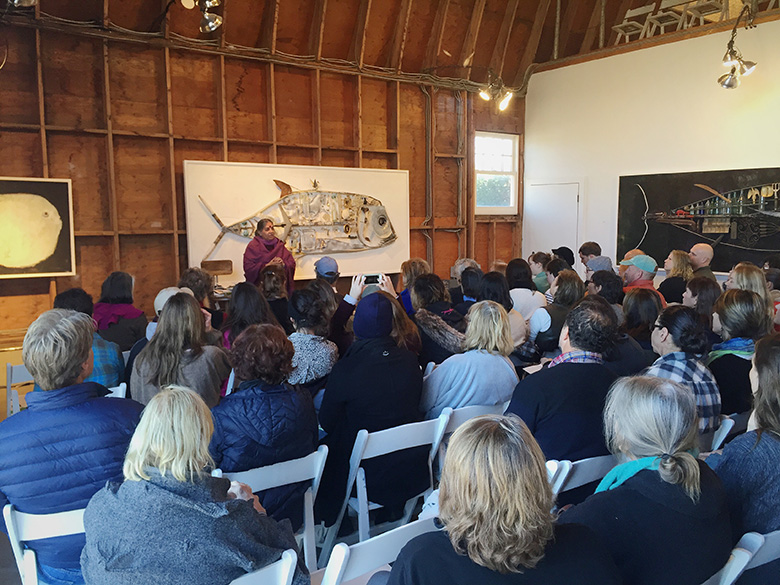 A giant in the environmental field — Dr. Vandana Shiva — came to eastern Long Island last month to speak about her battle against the drive by the chemical industry, led by Monsanto, to radically limit what has been a diversity in seeds, to mix the genes of different species to create genetically modified organisms and to otherwise “industrialize agriculture” at a huge cost to life and the earth.

The 200 people who filled the Silas Marder Gallery at Marders Nursery in Bridgehampton to listen to Shiva were highly enthusiastic. “She has a wonderful way of describing the overwhelming role of chemicals, but with a lot of joy and love and hope for the future and it being possible for humans to come together and turn things in a positive direction,” said Eve Kaplan-Walbrecht who with her husband Chris runs a booming organic farm, “Garden of Eve,” in Riverhead.

Scott Chaskey, long-time director of the also organic and also highly successful Quail Hill Farm in Amagansett, a project begun by Peconic Land Trust in 1990, said: “I’ve been reading her books since her first one came out. Her message gets stronger and stronger and her ability to organize people and to provide answers to the difficult situation we are in. Just extraordinary!” Chaskey is not only a student of Shiva’s work, he continues it as a farmer, a leader of organic farmers in the United States, and in his own books including Seedtime: On the History, Husbandry, Politics and Promise of Seeds, published last year.

Shiva, a Ph.D in physics, is from Dehli, India. Staying Alive, her first book, was published in 1988. A year earlier in India she founded the Research Foundation for Science, Technology and Ecology. This led to the creation in 1991 of Navdanya, an Indian movement to protect the diversity and integrity of living resources especially native seed, and to promote organic farming and fair trade. Soon, she became an international leader. In 2004 she started, in collaboration with Britain’s Schumacher College, Bija Vidyapeeth, an international college committed to education in sustainable living.

Books by Shiva keep pouring out including Earth Democracy, Justice Sustainability and Peace and Soil Not Oil, Environmental Justice in an Age of Climate Change.

She said she was delighted to be on eastern Long Island. “Your region still has farms that look like farms,” she said, adding this was in contrast to “industrial farms” that are “creating deserts” and doing “violence against the earth.”

She spoke of the “amazing web of life” and how “diversity” and “resilience” are integral parts of that. But there’s been a massive move since World War II led by chemical companies, particularly those that “make pesticides” derived from the “nerve gasses” they developed during the war, to bring “uniformity” to agriculture, dominate it and produce colossal profits for themselves. They have worked to control what is grown and “displace diversity in what we eat” while also striving to “marry chemicals and seeds.”

Read reactions about Shiva’s talk from members of our community.

She provided a list of a dramatically reduced variety of seed types now in use: beets from 288 to 17, cucumbers 295 to 16, tomatoes from 488 to 25. Her belief is that with “genetic engineering” — the mixing of the genes of one species with another, even if one is a plant and the other an animal or insect — chemical companies have created genetically modified organisms leaving the U.S. an enormous victim of this “dark path.”

Nations around the world have banned the growing of genetically modified crops — including many members of the European Union — but here in the U.S. a large percentages of crops, particularly soybeans and corn, are GMOs. Monsanto has become the corporate king of GMO seed by successfully lobbying the U.S. government to let it expand wildly. It’s been busy patenting its genetically modified seed, hooking farmers on its use and coupling that with use of its pesticides. “Is life an invention? Is it patentable?” asked Shiva.

Monsanto and the rest of the chemical industry has been manipulating the federal and other governments here to overturn local bans on GMO agriculture and suppress disclosure on food products that they are genetically modified, said Shiva.  At the same time, the chemical industry has been endeavoring to suppress U.S. media reporting on any of this.

Charlie Marder, after the talk, said he and Kathleen were “thrilled” to have Shiva speak at Marders as part of “an effort to interrelate the bigger issues.”