How a collapsed dock and a lawyer brought one man to farming. 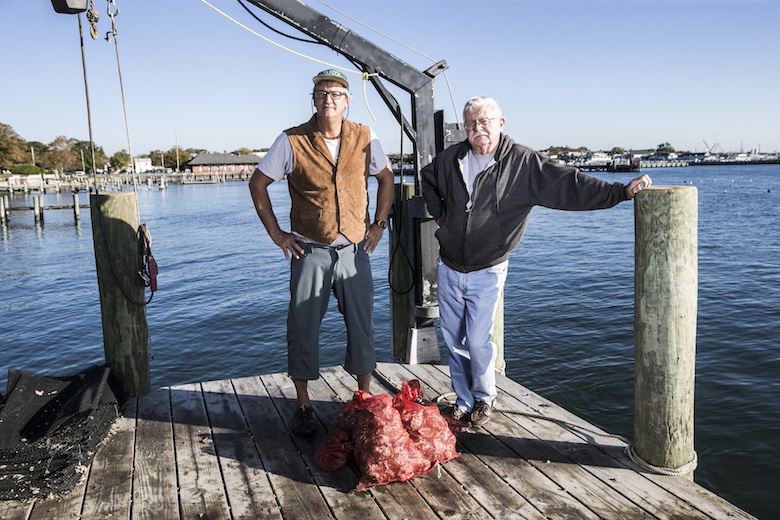 Michael Osinski, left, oyster farmer of Widow’s Hole Oyster Co. in Greenport stands on the newly built dock on his property with Mike Burden who taught Osinski everything about oyster farming. Photo by Randee Daddona

I literally fell into oyster farming. One Easter morning 14 years ago, with two infants in my arms, my dock collapsed into a very cold Widow’s Hole. At the time, I had just sold my software company and was having a difficult time enjoying early retirement. As soon as I had dried off and warmed up the kids, I called Costello Marine and ordered a new dock and ramp. As we shook hands on the deal, I asked John Costello if I needed permits. “You are replacing in kind. This is Greenport. Put it in the water,” he replied.

Well, I soon learned that replacing an existing piling needed a permit. My neighbors complained when the barge arrived to set the piles. An armed DEC officer wrote me a citation, which mandated an administrative hearing.

Being a New Yorker, I did not intend to get sucker-punched at the hearing and so hired a Greenport lawyer Bob Hughes to assess our strategy. He unrolled a 100-year-old map of Greenport on his conference room table. I was immediately struck by the large rectangle in the bay abutting my property. “What’s this?” I asked, pointing to the underwater parcel.

“Look carefully,” he said, his finger tracking from my lot to the lot underwater. “You see, they have the same tax ID. I think you own that. Write to Albany and get a copy of the deed.”

I returned home all smiles.

“For two grand, we just doubled our property,” I said. “We own five acres underwater, from our beach out 500 feet from shore.”

Greenport had once been the oyster capital of New York, but no one was growing oysters here then. We had nothing to do, so we decided to get permits and cultivate oysters. We thought it would be good for the kids and healthy for us. That romantic notion of farming has since enslaved us.

Two weeks later, a large manila envelope arrived from Albany. “The People of the State of New York,” began the document, “by the Grace of God Free and Independent … do give and grant unto Margaret Leverich, her heirs and assignees, the land under water.” In beautiful, legible cursive script the handwritten deed goes on to describe the boundaries and extent of the grant. Not only could people in 1887 write artistically by hand, they had a noble tone to their prose.

Margaret Leverich was the first owner of my house. Her name appears on the original records back to 1848. We assume she was the widow of Widow’s Hole. The underwater tract passed unnoticed along with the house through three different owners until I stumbled upon it. 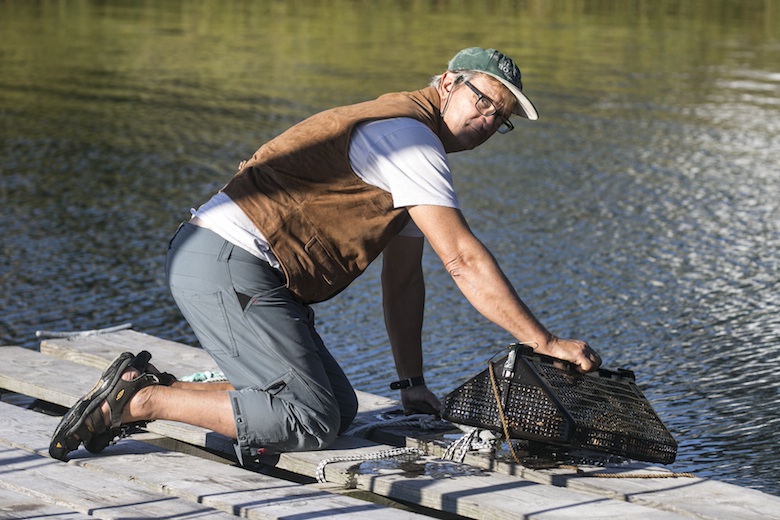 Michael Osinski, oyster farmer of Widow’s Hole Oyster Co. in Greenport harvests three year old oysters on the older dock on his property where it was discovered that he owned an additional five acres to his existing parcel.

I was a total novice on a boat. My neighbor, Greenport native Mike Burden, whose grandparents were the third owners of my house, taught me everything from how to tie anchor, overhand and bowline knots to how to rig a cage of oysters and how to approach a cage of oysters in a wind and the currents. When I ran out of gas or sank my boat, he was there to bail me out. It was Blue Acres here. I was a liberal landlubber Democrat trying to coax a load of oysters from the waters I had acquired from the distant past.

My first harvest was fall 2003. We carried a cooler of 400 to three Danny Meyer restaurants; I had entertained my clients at Union Square when I had my company. Ben Pollinger, now the chef at Oceana, Kerry Heffernan at 11 Madison and Tom Colicchio at Gramercy Tavern were our first clients. By October of that year, I had to buy a delivery van to take in the 2,500 we were selling every week. Our family farm had stumbled upon a forgotten secret of Greenport Harbor: Its huge flush of oceanic tides and its hard cobble and sand bottom grow a delicious animal. No wonder it was the Oyster Capital of New York, and how farsighted was the State of New York to give underwater grants to what once was the dozen canneries in the village.

When nature spurned my efforts with tempests and hurricanes, I became even more driven. When she lashed out at a stupid mistake, I was humbled.

Farming oysters began to grow on me as much as the sycophantic slipper shells and boring sponge Cliona (what the old-timers in the Peconic called sulfur sponge) began to attack our crop. Farming anything is a battle against the things that attack your crop. I spent my nights reading raisin farmer/Greek historian Victor Davis Hanson about the trials of the yeoman farmer and how farming was the genesis of Greek democracy. Along with a sunburned, red neck, I began to acquire the stooped gait and hard-bitten attitude of someone who contends daily with nature in all its glory and brutal indifference. Farming is its own metaphysical reward. Many was the offer to return to the lucrative world of software I refused in an effort to coax the perfect mollusk out of my five acres of good bottom. When nature spurned my efforts with tempests and hurricanes, I became even more driven. When she lashed out at a stupid mistake, I was humbled.

Midway through my second decade of tending my beloved five acres, I have become a different man. I am no longer the Wall Street Master of the Universe, but a devout believer in the master scheme of the universe of which I am but an infinitesimal cog. How can one not become religious if your daily toil is to tend an animal that crests to perfection at Christmas, goes dormant at New Years then returns to life at Easter when the northern oceans bloom with algae?

Oysters have been the new sushi for five years.

Now, there are more than 50 growers in the Peconic Bay. The Great South Bay has a dozen oyster farms. We recently revived the Long Island Oyster Growers Association. Oysters have been the new sushi for five years. I have a chain of Parisian bakeries that is trying to make them the new bacon on their menu. Oysters are breaking out of the appetizer section of the menu and moving to the fish and entrée portion. I don’t think we will ever return to the era of the early 1900s when the entire Peconic Bay from Montauk to Orient to Riverhead was planted in oysters. Old-timers say the summer tide then came in gray-green and left going out clean as a whistle from all the oysters on the bottom. But I do think that oysters, just as my five acres have changed me and have made my teenagers into competent and hard-working individuals, can make the Peconic a major source of nutritious protein for the State of New York, while cleaning the bays and providing habitat for a new bloom of fish.