Out on the Bay, Scalloping

The mechanics and bycatch are just half the fun for an amateur.

Scalloping is my favorite activity, hands down. I’m lucky enough to have friends, like East Hampton baymen Kevin Miller and Albert Lester, who have allowed me tag along many times.

A skiff is outfitted for scalloping with a culling board across the midsection, various baskets, mesh bags and six dredges no more than 36 inches wide. It varies but last time I went, on my birthday, two dredges were placed at the bow of Lester’s boat, keeping things even keeled. Two hung off each side and were alternatively dropped to the bottom of the bay then dragged along for a few minutes. 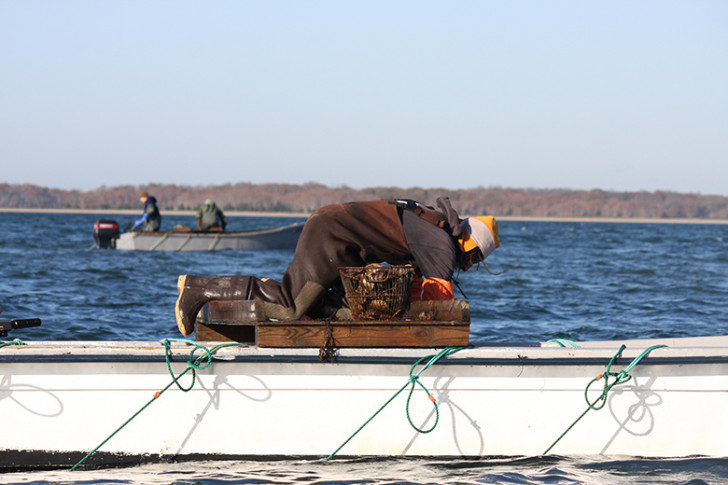 The forked dredge is slowly pulled up by hand. No mechanics are allowed. In one swift movement it’s flipped onto the culling board where the contents are spilled out.

I like to think I help out by separating the wheat from the chaff or the scallops from the by-catch. The mix of seaweed, dead shells, rocks and snails are just as interesting as the scallops, just not as tasty.

Sputnik, an invasive seaweed named after the 1957 Russian satellite, or Codium fragile, is anything but fragile. Clumps are dense and spongy. “Whale shit” is the nickname for the blobs of bright yellow boring sponges. Certainly, it’s not the kind of phylum Porifera you’d want in your bubble bath. Cliona celata bore holes in shellfish, eventually killing them. We see a lot of those holey shells on deck too. Quarterdecks, common slipper shell or Crepidula fornicata, are snails that attatch to one another. My favorite are spirals of knobbed whelk egg cases. Inside each nickle-sized case contains hundreds of tiny Busycon carica, which will grow large and eat clams. You’ll also see them dropped on the roadside by seagulls feasting on the meaty snail inside. 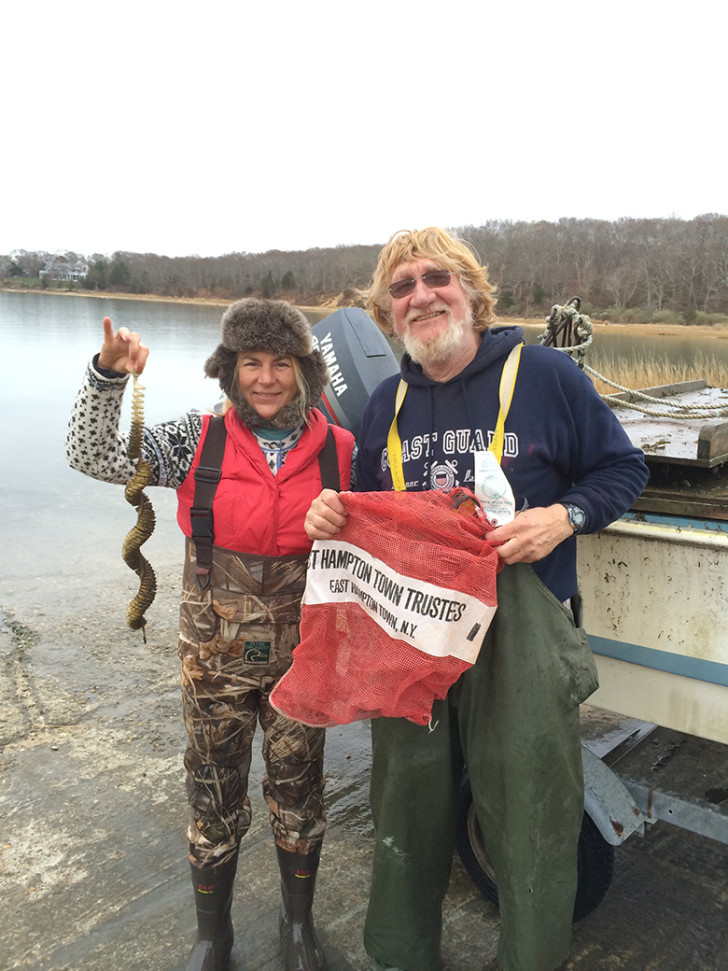 Atlantic bay scallops, Argopecten irradians, have eight blue eyes along the edge of their ribbed shell. Sometimes the abductor muscle, the part you eat, is called the “eye,” but this is what the bivalve uses to open and close in order to move along and eat plankton.

Scallops, at least 2-1/4 inch in length, are thrown into a bucket and the process is repeated until the baymen reach their limits (10 bushels per commercial license, one bushel per recreational) or they get enough for dinner.

No dredges are allowed on Sunday. In that case, or if we feel like keeping it real, I tug my waders on, grab my lookbox made from left-over wainscoting and plexiglass, a long-handled net, a floating basket and walk into the bay from shore.

The plexiglass bottom magnifies the sea floor and if you look very hard, you’ll see the shape of the scallop hiding in the sand and eelgrass. Long gloves avoid soggy sweaters.

The plexiglass bottom magnifies the sea floor and if you look very hard, you’ll see the shape of the scallop hiding in the sand and eelgrass. Long gloves avoid soggy sweaters.

A day on the water in November is exhilarating. Going home to eat scallops, priceless. Long Island bay scallops are so sweet, China cloned them. Scallops whet the appetite pre-turkey on Thanksgiving.  And make the best birthday gift, hands down.