Growing in my compost heap and front lawn were the ingredients for a perfect fall side dish. 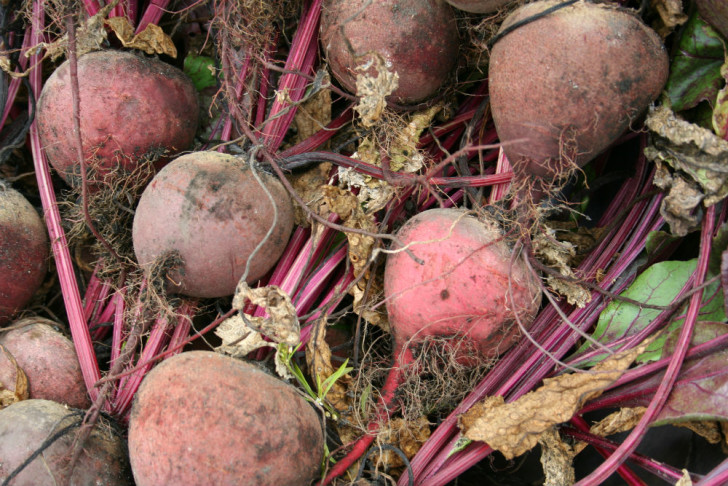 With all the talk of another terrible winter around the corner, this autumn has been especially lovely on the East End. Perhaps it’s the calm before the blizzard, or perhaps it’s just one of those normal (but now rare) mild autumn we often associate with eastern Long Island. My garden is still thriving in spots, sprouting gorgeous new spikes of lavender and dropping tiny red cherry tomatoes off a vine growing up the side of my porch. In my also-thriving compost pile was a surprise of another sort.

It was time for the weekly turning-over and to balance the brown and green ratios. Upon doing so, I felt the pitchfork hit what seemed like several large, round rocks. Bending down, I could see bits of bright green — new shoots of some sort — growing out of the rocks. The rocks were not rocks at all, but beets, self-seeded and growing in my compost pile!

The rocks were not rocks at all, but beets, self-seeded and growing in my compost pile!

I gave half a second’s thought as to whether one should eat something grown in a compost pile, then grabbed all six of the little boulders and took them to my kitchen. After a good rinse, I sliced one open. A firm fresh golden beet was revealed. There was a nice portion of Captapano goat cheese in the fridge and lots of rosemary in the garden, but not much else. Until, that is, my children came in from the front yard munching on something green. “It’s purslane,” they said. “There’s loads of it in the lawn out front.”

Purslane, with its firm succulent-like tendrils and pretty leaves, is considered by some to be a weed, by others to be a culinary and nutritious delight.

Purslane, with its firm succulent-like tendrils and pretty leaves, is considered by some to be a weed, by others to be a culinary and nutritious delight. I’m of the second camp when it comes to this mild crunchy green, and since I don’t use any pesticides or petroleum-based fertilizer on my lawn, it seemed the perfect missing ingredient for my impromptu beet dish. 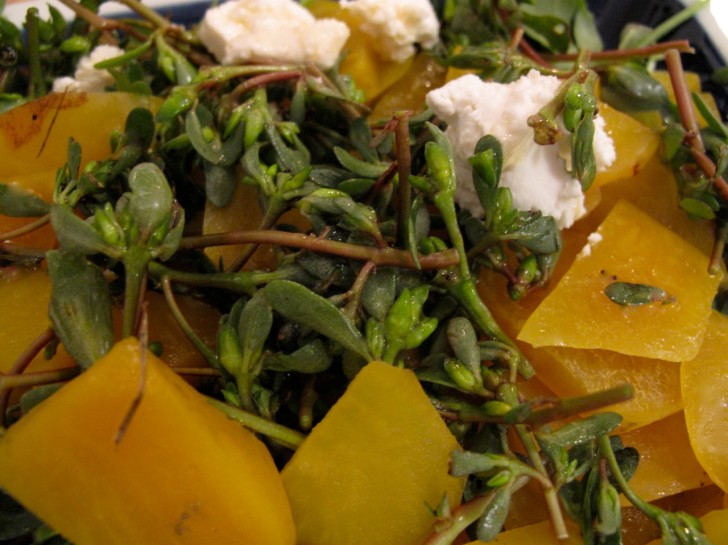 Dinner that night was delicious: golden beets and goat cheese over purslane with a rosemary white balsamic vinaigrette. It had all the fresh, sweet earthy flavor of a mild autumn. As long as the frost holds out, I expect to keep seeing beets at the farm stand in the next few weeks. By then the more delicate purslane will be gone from my yard, but the arugula will still be around. Sounds like the perfect Thanksgiving side dish to me.