You haven’t lived until you’ve shucked garlic cloves while singing a work song. 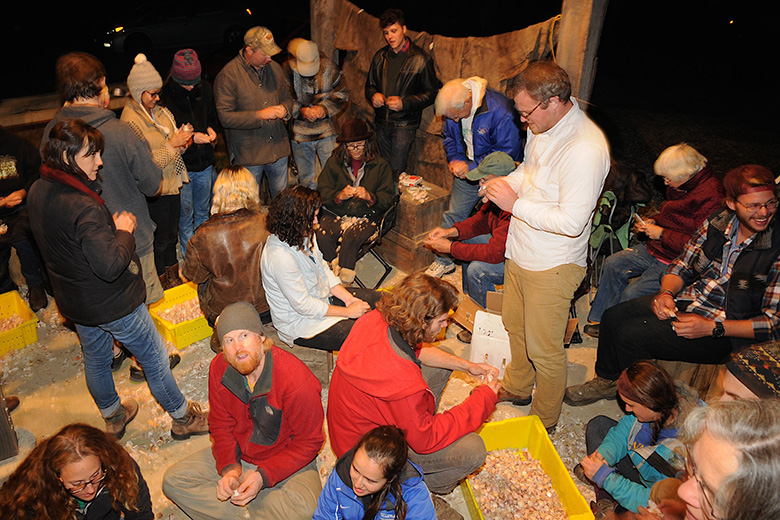 I’m planting garlic seeds that I got from Dave Falkowski of Open Minded Organics in Bridgehampton today, inspired by Sylvester Manor Educational Farm’s annual “Plant and Sing” held on Shelter Island in October.

As the Big Dipper hung low in the northern sky, the fall celebration started with dinner under the eaves of the farm stand. Plates were filled with boiled shrimp, panko-crusted cod and farm vegetables cooked over a wood fire. Once bellies were filled, shucking and singing commenced.

“We’ll shuck 240 pounds of garlic in about an hour,” co-founder, garlic farmer, musician and worksong aficionado Bennett Konesni told the crowd of about 60, “If you weren’t here it would take the crew about a week, so thank you for being here.”

Appropriately enough, Music, the name of a porcelain hardneck variety of garlic, was brought out first, followed by a new variety called “Manor red” a combination of rocambole hardneck Russian Red and Spanish Roja.

“Garlic is conducive to singing, and it is a high-value crop that you can do on a relatively small scale. Garlic is a good crop for musicians, too, because it is relatively non-perishable and you can go on tour and it will take care of itself if you mulch it heavily,” Konesni says later. “You don’t have to milk it daily or feed it every morning and night. It won’t jump the fence and go raid the neighbor’s garden. That’s why I plant garlic.”

They don’t call them “hardnecks” for nothing. The cloves hang tight to their stalks. There’s a popping noise when the cloves release and apparently, if one of the cloves stays attached to the stalk when planted, it grows better. “I’m not sure I believe it,” Konesni says.

“If the cloves are soft and puffy, they are rejects. Toss them in middle,” he says, “Do not put rotten seed in bins. Drop husks on the ground. We’ll sweep later. Check each clove. Don’t take off the wrapper. It is protection,” he adds. “Toss gently in the yellow bins.”

Konesni starts the singing with Ervin Webb’s version of a song first sang by prisoner Bama Stuart and recorded by Alan Lomax.

Following Konesni’s lead, individuals made up a line, ranging from the obvious, I’m a gonna shuck some garlic, gonna plant in the morn,” to the absurd, “What’s with all the stink bugs? 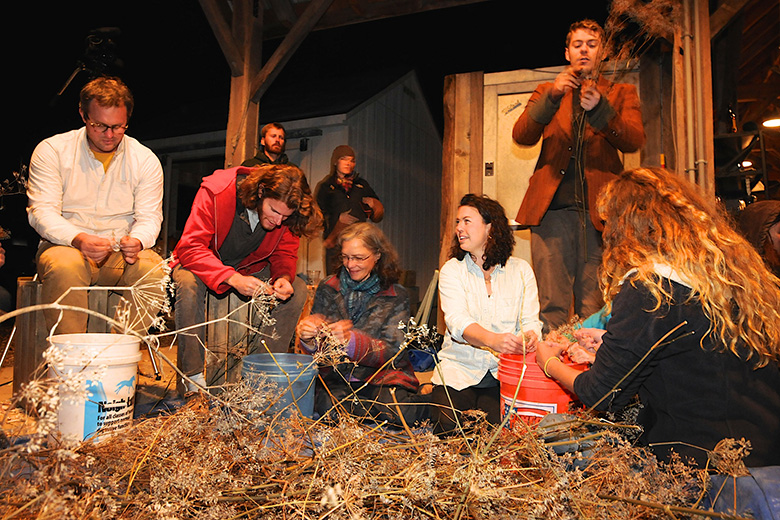 Piles of garlic disappeared in no time. A blue tarp full of dried fennel plants took its place. Pulling tiny fennel seeds from the flower heads proved even harder than shucking garlic, albeit with a sweet anise fragrance.

The next day, after the Plant and Sing, in Windmill Field, a bluegrass festival took over the farm’s waterfront lawn and a contra dance raged into the night.

Help support Konesni’s Worksong Project, “part documentary, part video songbook, part how-to series,” as a way to encourage other farmers to use music as a tool to get things done faster, more efficiently, and with more fun.

I’m off to do some shucking, planting and singing. Thanks guys!