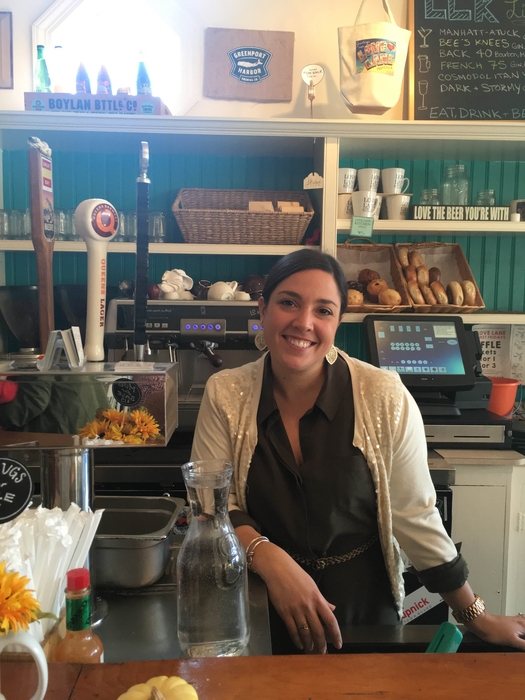 Everyone comes to Love Lane Kitchen for a cup of the house-roasted coffee — a la North Fork Roasting Co. — and sticks around for the company. “One of the best parts,” says Carolyn Iannone, the cheerful owner of the restaurant, “is that it always takes people 15 minutes to sit down because they’re saying hello to everyone that they know.”Iannone took on the restaurant in August 2012, when Mike Avella (previous owner) passed the torch to her — two weeks before her wedding! It was “the year of being bold,” Iannone says. “It all happened very organically. I had been managing the restaurant for three years at that point and the opportunity presented itself. I think it was a mix of truly loving what I did as a manager and having learned a lot from Mike that made me take the leap. I had a lot of support from my family, and also from our staff and customers, which was really encouraging because it was a pretty overwhelming idea at the time. Some days it still is!”

Initially, out of college — where she studied English literature and wrote for the Albany Student Press (she has an ode to the desserts of Claudia Fleming that is worth sharing, if you ask her) — Iannone hoped to combine her penchant for writing, fine food and travel as a food journalist, because “food is the universal language that connects people,” she says. Instead, and luckily for all of those that have gotten to know her here, Iannone ended up moving to the North Fork and started serving wine at Paumanok, where she says she learned about wine. After the vineyard, she served at Jedediah Hawkins and realized what it was like to work with a chef who created a culture of farm-to-table and taught the staff  about food and service. Lastly, she made her way to Love Lane Kitchen and managed beside Jennilee Morris (now co-owner of North Fork Roasting Co.) until she took that leap of faith three years ago.

Every time I’ve gone there to seek solace, I’ve met a fellow traveler seeking sanctuary, a shelter from their storm, who has gravitated toward the light of the café. Love Lane Kitchen is a home away from home for people and well deserves an allusion to Hemingway’s finest short story.

“One of the best things about the North Fork is that a lot of our customers are our producers,” says Iannone, who adds oftentimes suppliers such as John Quigley and Jane Maguire of East End Mushroom Company drop off their mushrooms earlier in the day only to come back later for dinner and eat those same mushrooms in their entrée. When Lucy Senesac served there a few years ago, she brought tomatoes from her day job at Sang Lee and was able to serve them later that night. It doesn’t get more farm-to-table than that. The farm-fresh vegetables “come in dirty and it takes three washes to get the dirt out,” says Iannone. God forbid a grain of sand gets left behind in someone’s salad. “It’s local sand,” says Iannone. If the ingredients are not from locals such as Satur Farms, Crescent Duck Farm, Cor-J Seafood, and the Village Cheese Shop, they come right from the garden out back — mint (a lot of mint), sage, rosemary, lavender, figs, tomatoes, squash blossoms, sorrel and sweet potatoes. “The food is always fresh because we’re always busy,” says Iannone, “and we’re always busy because the food’s always fresh.” 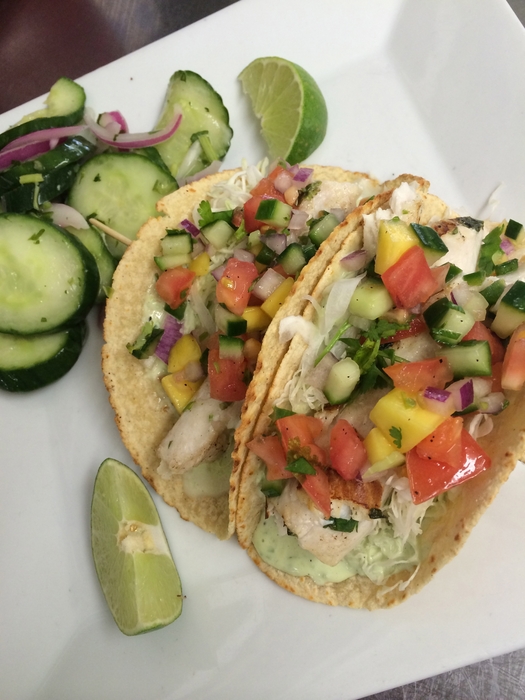 The same apples to the wine and beer. Iannone, a certified sommelier, spends a great deal of time compiling her wine list to include wines that represent the region and showcase the specialties of each brand. On tap, the three beers rotate often between the whole gang of Greenport Harbor Brewing Company, Great South Bay, Queens Brewery. Moustache Brewing Co., Long Ireland Beer Company, Crooked Ladder Brewing Company, Twin Fork Beer Co., and Woodside Orchards hard cider. Right now Leaf Pile, Queen’s Lager, and cider are on tap. “I’m so grateful to be in this area, to be able to know, really know the producers. A lot of the winemakers are friends, I’ve been to their weddings,” says Iannone. “This is a community that is so amazing to be a part of.” Chef Gerry Hayden and his team knew the potential ahead of everybody else, she adds. “They changed the face of the hospitality industry on the North Fork, made it look cool and did it with joy.”

Iannone wasn’t born with a silver spoon in her mouth and she knows what it means to work her way up. Her goal is to “create an atmosphere that allows staff to find what they are passionate about,” she says. “I love what I do and I want them to love what they do.” The restaurant offers cocktail, wine, barista and hospitality classes, and goal-setting workshops to allow everyone the opportunity to learn about everything and become skilled for possible careers in the food industry. “They’re excited about it and we’re excited about it,” says Iannone. Oftentimes parents of the staff and even customers are eager to stop by and learn alongside them.  “Their potential is staggering. They’re young and they’re smart,” says Iannone. “When you highlight the value of their work,” adds Rita Iannone, Carolyn’s mother and the dessert baker, “all of the staff is able to realize the beauty of the work they do.” Whether it is cooking or serving the guests, “the staff is proud to be serving this incredible food,” and there is a dignity and grace that comes in feeding the community with the food it has grown.

When you have a combination of great staff, customers, food, and locale, “you get this fifth element you can’t quite put your finger on, but you just know it when you feel it,” says Iannone. “It might sound a little cheesy but it’s real, I promise you. This place has a mind of its own!” 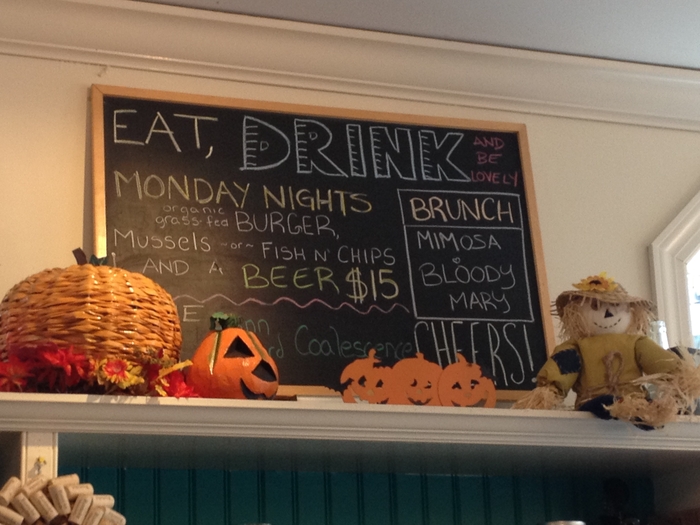 On Monday nights, when the restaurant has a $15 burger and beer special — The Burger (organic grass-fed beef, cheese of choice, toasted sesame seed brioche bun, and a pile of herbed garlic fries) and local beer on tap — on what is ordinarily a quiet night for most restaurants, the bar is full of life. And, interestingly enough, a lot of people come in by themselves for dinner at the bar, myself included, to be in the company of other people. Every time I’ve gone there to seek solace, I’ve met a fellow traveler seeking sanctuary, a shelter from their storm, who has gravitated toward the light of the café. Love Lane Kitchen is a home away from home for people and well deserves an allusion to Hemingway’s finest short story.

There is a lot of love on Love Lane and the heart that beats is Love Lane Kitchen.

Some people stop in every day. One of Iannone’s favorite patrons is a “brilliant” 93-year-old man who comes in for pancakes each morning to tell his stories. And, fascinatingly enough, there is usually “at any given time at least one off-duty staff member hanging out for coffee or lunch,” says Iannone. “It could be one of the server’s only days off and they end up coming in for lunch or coffee — it’s really funny.”

That sense of community is not only among the patrons, staff and the spot, but local business owners as well. “I’m so grateful to be a part of Love Lane, with cool passionate people that love and respect one another,” says Iannone. “The mission of [the other shopkeepers], and ours as well, is to get people to understand that we’re all connected and working together, that all boats rise.” One example is “Love Lane First Fridays, 6–9 p.m. on the first Friday of every month through December (next one is November 6), when the road shuts down and becomes a block party replete with $5 sips (a pint of local beer at Love Lane Kitchen and a glass of wine at Roanoke) and $3 bites from a host of other East End producers in a farmers market that lines the sidewalks.

After a busy summer, Iannone is looking forward to the fall and a calm winter to regroup. In the middle of the winter, Iannone’s restaurant will be, as it always is, a hearth, a warm place to sit, a home away from home for those that live on and visit the North Fork. There is a lot of love on Love Lane and the heart that beats is Love Lane Kitchen.

Here are some of Iannone’s favorites from the menu — I didn’t even bother to ask her which one of her mom’s amazing desserts (chocolate cake, coconut cake, carrot cake, cheesecake) is her favorite, let alone to choose a favorite local wine: