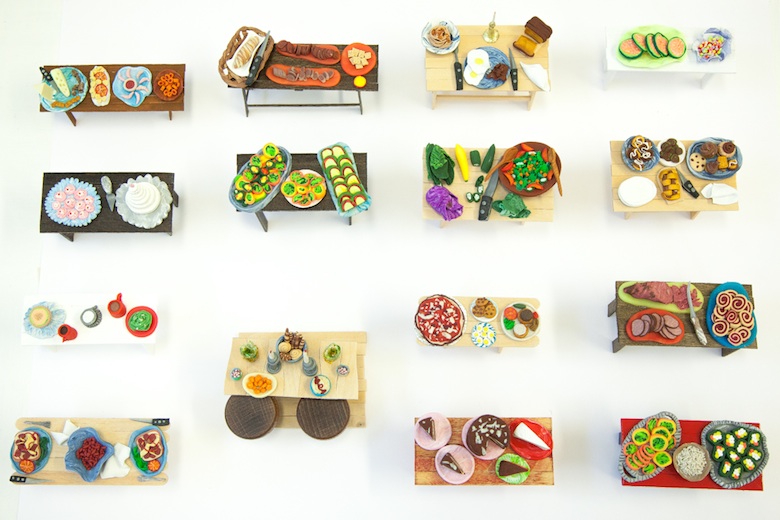 Ruby Jackson moves through her studio just as I’ve watched many chefs move through their kitchens: with a confidence as quiet as her enthusiasm is deafening, and with a sense that the room around her contains everything she needs.

Nestled in a spacious and sun-lit corner of her home in Sag Harbor, Jackson’s studio is a veritable feast for the senses—and beneath beautiful, glittery installations hanging from its ceiling are literal feasts, too. Made of polymer clay. In miniature. 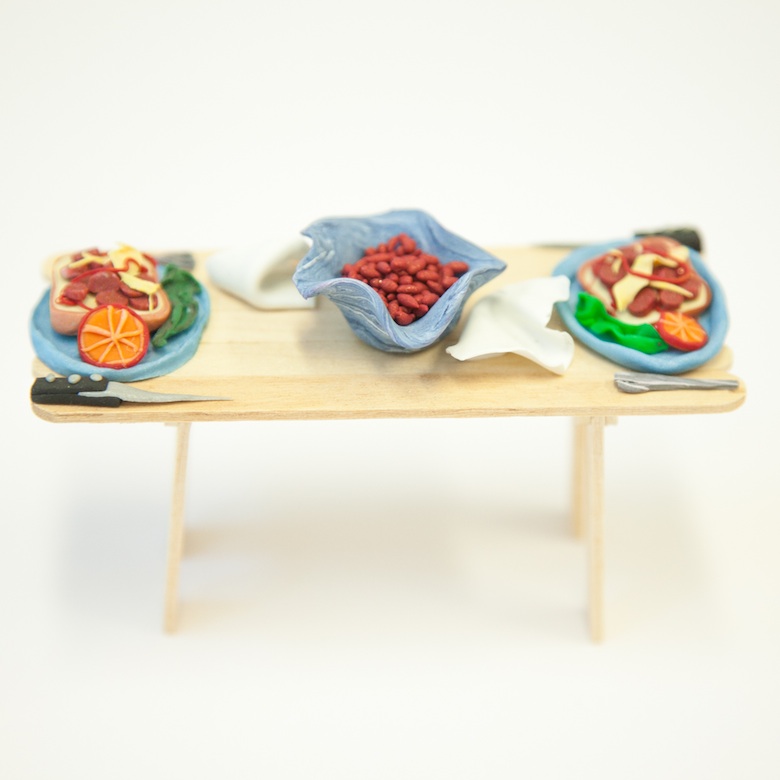 Of course, Ruby Jackson is an artist, and her miniature food sculptures a perfect display of the scope of her artistry. I examine each of the sculptures with equal parts amusement and awe. The attention to detail is astonishing.

“They are so much fun to do,” says Jackson. “But they take a long time.” 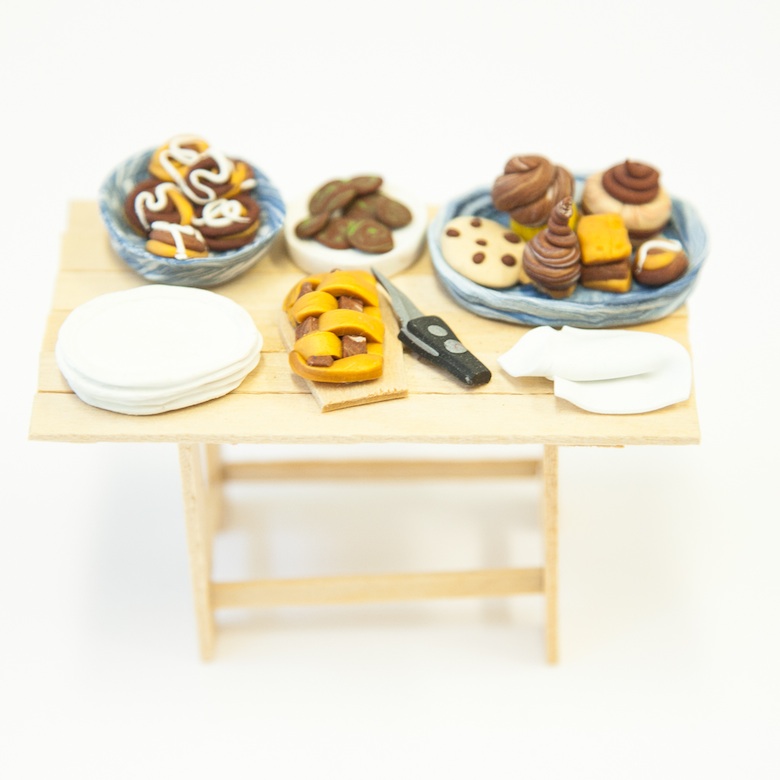 Take a look at one yourself and you’ll understand why. Jackson’s miniatures look perfectly edible, with each food item and its setting perfectly, meticulously made. I am tempted — more than once — to take a tiny bite of a tiny something. My eyes are drawn immediately to a table heaving with cake. 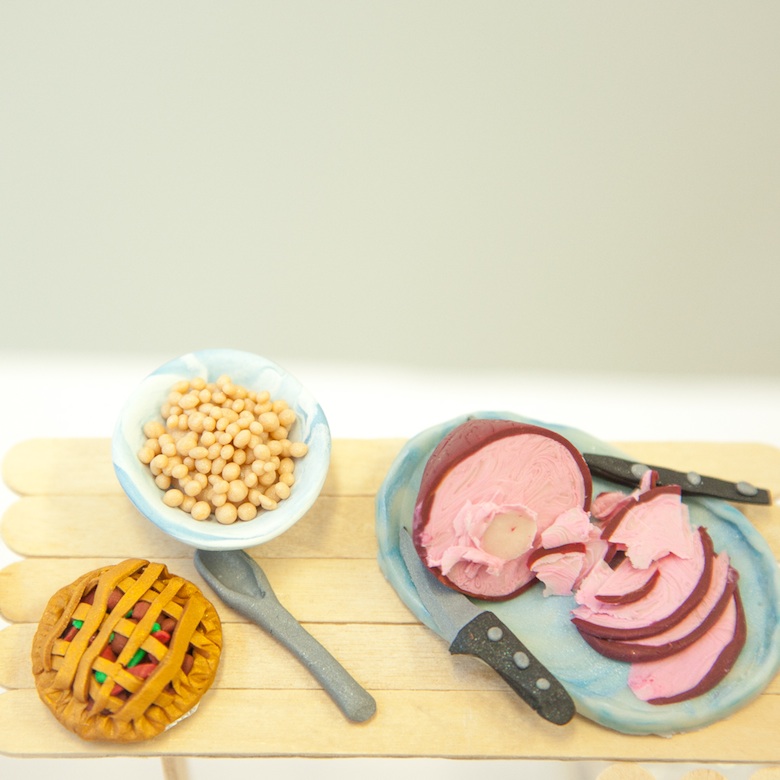 “I’m really not sure,” says Jackson. “Art is all about playing around and experimenting. It all began last winter. The miniatures—they just sort of started.”

At the time, Jackson was just a few months into her retirement. She’d spent the previous 13 years working at the Pollock Krasner House in Springs, an experience she calls “inspiring.” 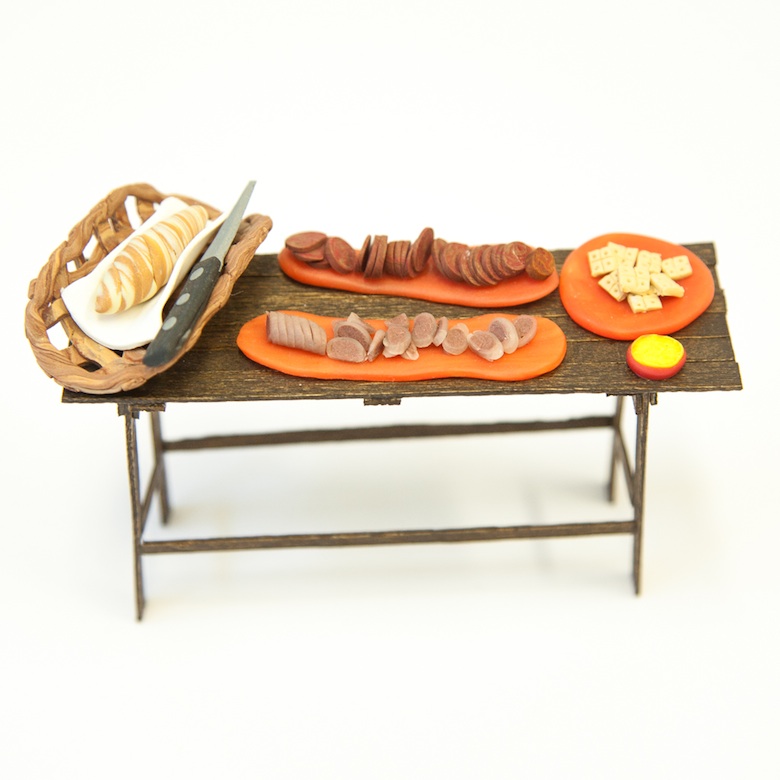 But this — making art — is what Jackson was born to do. And now that she’s retired, she actually has the time to do it.

Sometimes the doing begins with a thought. “I’ll just think, ‘I’m going to make some eggs,’” says Jackson. “Then I’ll need a plate. I wonder, ‘What’s going to go on this plate? Hmm, maybe I’ll make bacon.’ Then I try some bread and put it all together.” 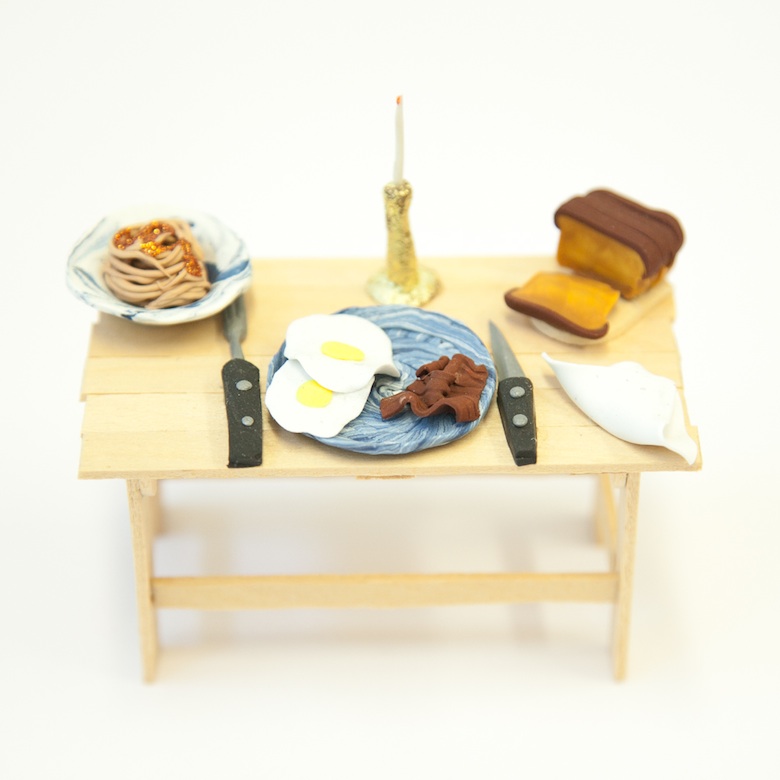 Her process sounds a lot like traditional meal planning. So, too, does her description of how she approaches each piece’s preparation.

“I really prepare this food,” says Jackson. “I spend a lot of time really preparing it, really cutting it. Food is one thing we all do. I just get bored with cooking. I read recipes and I think, ‘These people know spices the way I know color.’ Art just better suits me.” 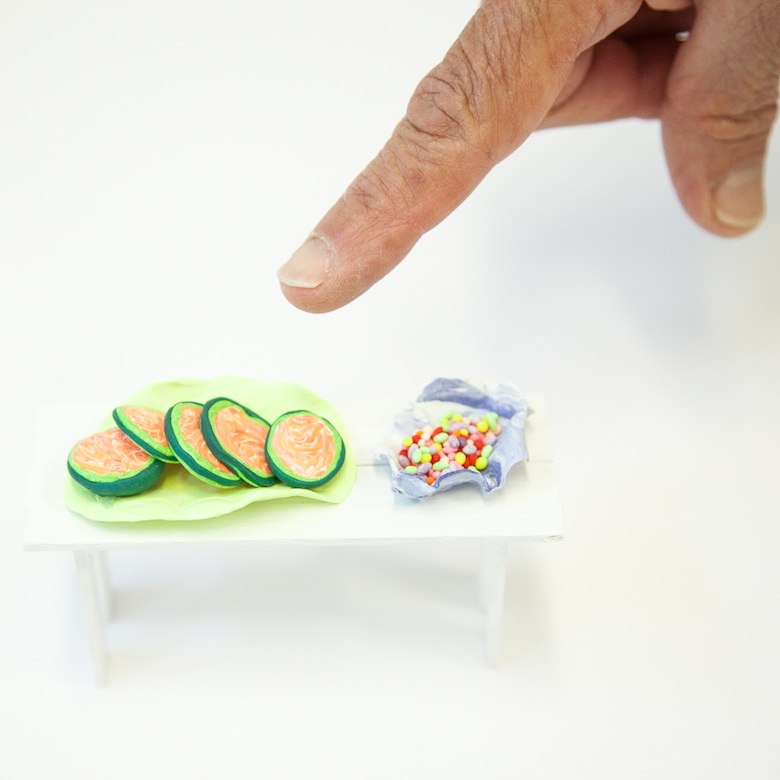 Jackson always wanted to be an artist. She was born in Washington, D.C., but moved to New York with her mother and sister when she was six. At 19, she moved into the city before marrying and eventually settling in Sag Harbor.

“I just marvel at the light here,” she says, when I ask her how she likes living on the East End. “I’m very inspired by nature. All the forms you want are in nature. Here, it’s just truly awe-inspiring. It inspires me a lot.” 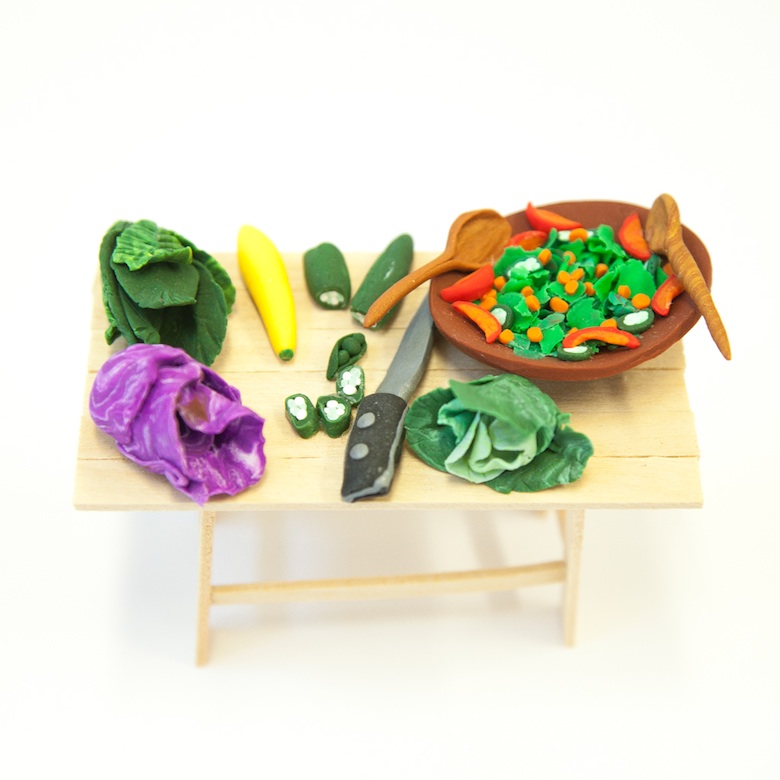 Spend an hour with her, and you’ll find yourself similarly inspired by Jackson. “I’ve waited my whole life for this,” she says. “To make art.” 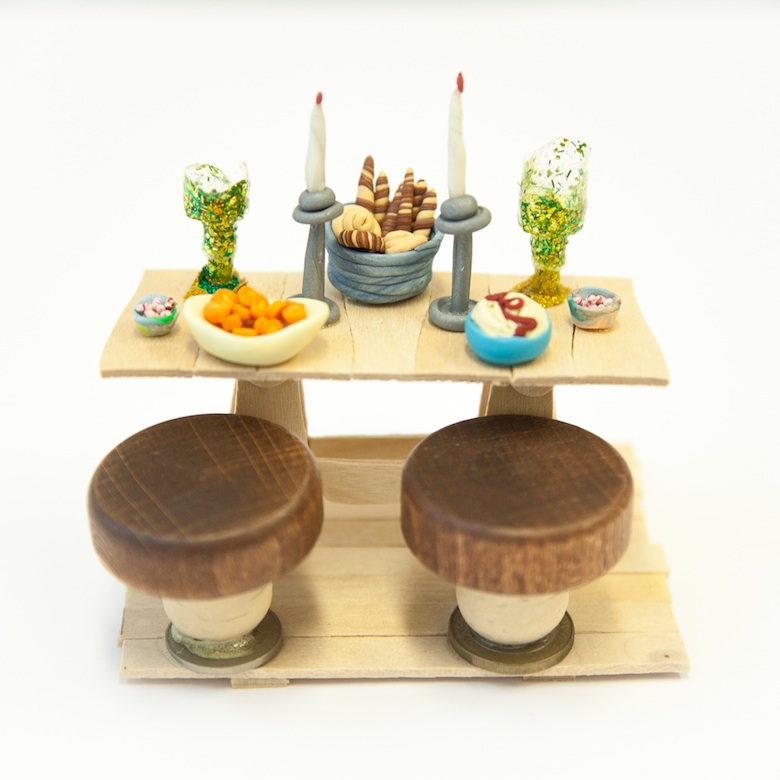 Which is exactly what she’s doing, and always has done. In Sag Harbor with her magician husband Allan Zola Kronzek, Jackson is preparing more than just miniature food. She’s illustrating a children’s book on Lee Krasner, working on folded paper collages, and gearing up for a show at The White Room Gallery in Bridgehampton. 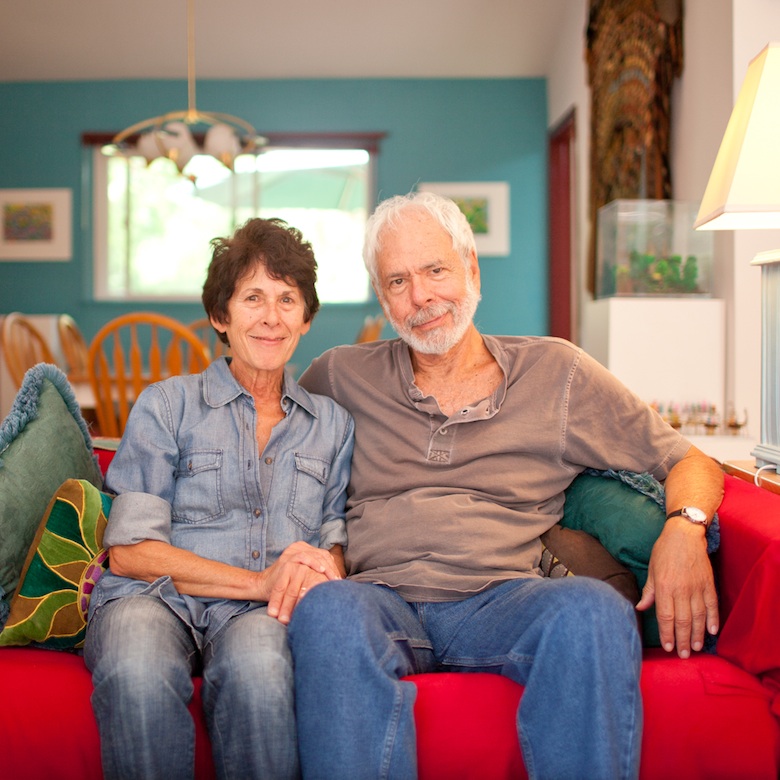 Sometimes that something better looks a lot like miniature food.

Ruby Jackson’s art will be on exhibit at The White Room Gallery in Bridgehampton from November 3-30. The exhibit’s opening reception will be held on Saturday, November 7, from 6-8 p.m.