What is inexpensive, doesn’t sting and makes carrots grow? 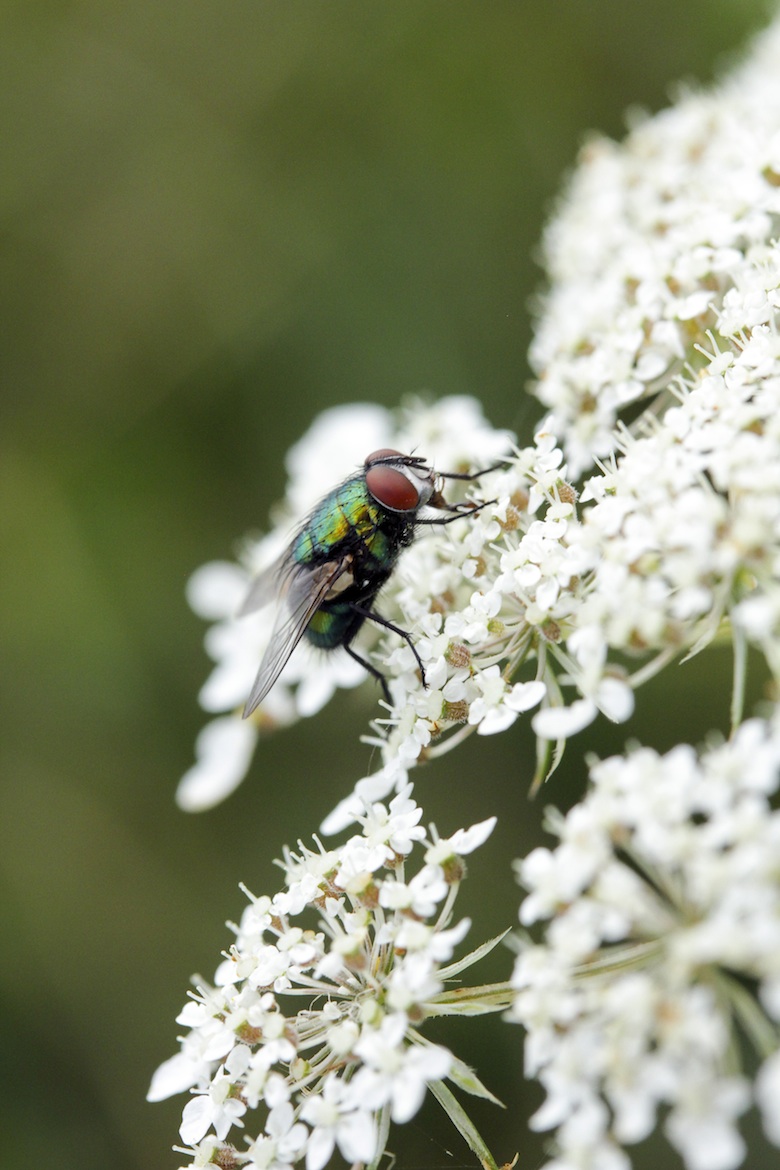 With hundreds of thousands of fly swatters sold in the United States each year (100 per year at Southold Hardware alone!), one might conclude that all flies should be eradicated. But! A grand number of fly species are actually good pollinators! In fact, flies are second in importance to bees as a pollinating insect and are known to pollinate at least 555 species of flowers. Fruits pollinated by flies include apples, pears, cherries, plums, apricots, peaches, strawberries, raspberries and blackberries. Spices and vegetables pollinated by flies include peppers, fennel, coriander, caraway, onions, parsley and carrots.

Flies visit flowers for a number of reasons. Most importantly, pollinating flies visit flowers and eat flower nectar (sugar) to fuel their flight activity. Sometimes flies will eat the pollen (protein) to prepare their bodies for reproduction. While they have patches of short hair covering their body, flies do not have special pollen‐collecting structures nor do they actively gather pollen. Pollen grains inadvertently stick to the flies while the flies are feeding on nectar. Overall, bees tend to be more effective than flies in depositing pollen, but flies appear to be responsible for more pollen deposition due to their higher flower visitation rates.

On the other side of the relationship, flowers need dispersal and delivery of pollen, and food is the major reward flies get from visiting flowers. Flower‐visiting flies have sensory structures on their antennae that allow them to detect floral scents and home in on flowers. Flies tend to have large eyes with color vision, and the ability to detect the glint of nectar in an open flower. Upon landing on a flower, taste receptors on the legs detect the presence of food, and the proboscis (its sucking mouthpart), which is also loaded with taste receptors, lowers automatically for feeding.

Numerous flies are often misidentified as wasps or bees. No, it is not a Halloween costume they are wearing for the evening. While flies cannot sting, some flies mimic stinging insects to make birds and other predators avoid them. The flower flies (syrphids) masquerade as bees and wasps with their bold warning stripes of yellow and black. The bee flies (bombyliids) are extremely hairy and striped with black, white or shades of brown, resembling a bumblebee. Since bee mimic species are especially hairy, they are particularly good pollinators. Pollinating flies can be distinguished with a sharp eye. Flies have only one pair of wings while bees and wasps have two pairs of wings.

Flower flies also play an important role in agriculture and forestry. Forty percent of the world’s flower fly species have larvae that mainly eat crop‐damaging aphids, thrips and other plant‐sucking insects. Worldwide, aphids alone cause tens of millions of dollars of crop damage each year. Female flower flies can smell aphid colonies and will lay their eggs directly in or in the vicinity of it.

Carrot, parsnip, dill and celery seed producers frequently use commercially reared blue bottle flies (calliphorids) for pollination inside screened cages containing multiple flowers. Flies are for sale by professional rearing facilities and are typically shipped as pupae ready for emergence. Seed producers like working with flies because they don’t sting, are available year round by overnight shipping and are inexpensive.

Horse flies and deer flies (tabanids) are like mosquitoes; the females feed on blood but the males feed chiefly on nectar and pollen. They are pollinators!