The end of the line for a fishing family is not going quietly. 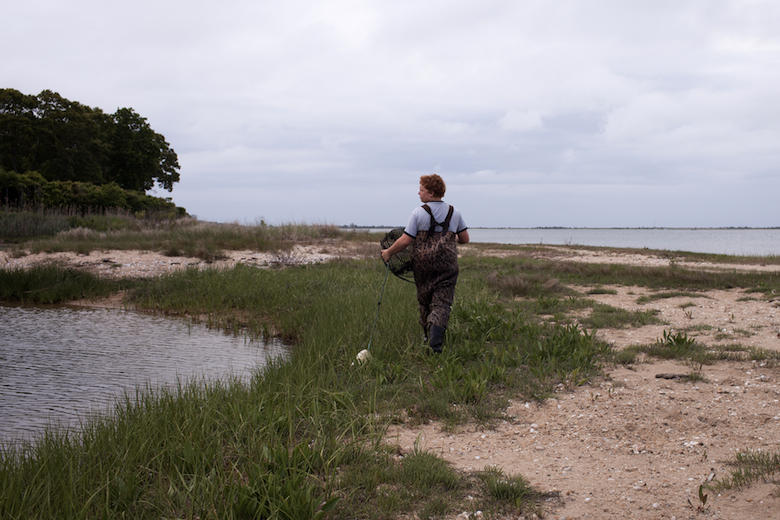 Will surveying Three Mile Harbor to determine where he wanted to place a few eel pots. (2015)

Fresh Pond is a brackish gem in Amagansett. Mothers take their children to wade in the stream pouring from the pond into Gardiner’s Bay at Little Albert’s Landing. Will Bennett is that rare person who actually gets beyond the reeds, into a boat and takes it all in.

Bennett’s family has been fishing for “well over 400 years” in Amagansett. It’s safe to say the 13-year-old is wise beyond his years and has every intention of keeping the family’s tradition of baymen alive.

“My whole entire family did it,” says Bennett. “Everyone I’m related to did it.”

At the end of a dirt road leading to the heart of Fresh Pond, Bennett, wearing orange waders, a white T-shirt and a baseball cap with the bill in the back, red hair peaking out in front, maneuvers his 14-foot skiff, Clam Man, off its trailer. “I’m getting too old for this,” he says. 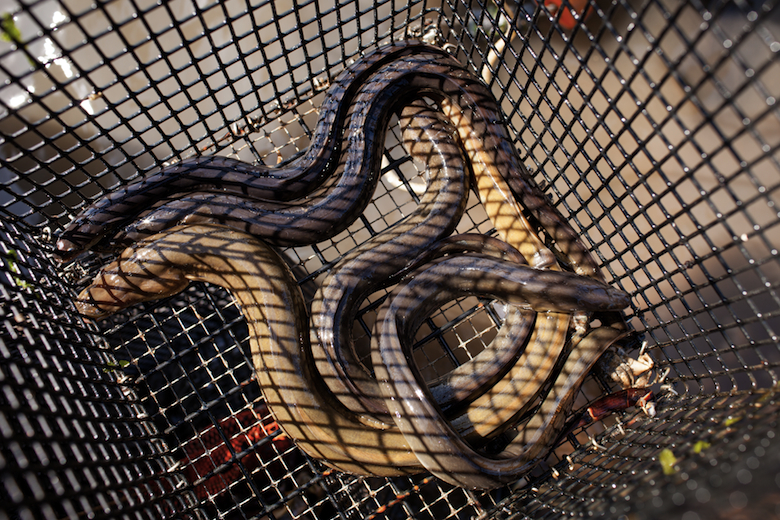 Bennett fishes every week in season from April to December. During school days, he gets out on weekends and maybe one or two afternoons after school. Today, he and family friend Justin are picking up eel pots.

He could just as easily be going to a fish trap in Napeague Harbor or gill netting off the ocean beach with his uncle Paul Lester, oystering in Three Mile Harbor with his mother, Kelly Lester, or crabbing in Accabonac Harbor with his father, Todd Bennett.

One thing’s for sure. The boy likes to fish. “Will wants to go out every day,” says Justin, who will get wakeup calls before 5 a.m. on some days. “He doesn’t understand most adults don’t have time.” But Justin makes time.

“Will can find food like no one I’ve ever met. He’s 13 but he thinks he’s 30,” he says. “He puts you into some good seafood. Every night I get home and put something on the grill.”

Bennett would rather be fishing than be in school. Still, he has a near-perfect attendance record. The one day he missed was opening day of bay scallop season, or Christmas Day, for baymen.

Bennett lives next door to his grandparents’ home. His grandfather Calvin Lester’s scallop shack is legendary among local baymen, but Lester passed away in 2007 when Bennett was just knee-high. His family’s stories endure in him.

“It’s gushy underneath my feet,” Bennett says, moving the boat slowly along the shoreline.

Two days prior, the duo strategically placed 26 eel pots at the bottom of the pond, visible by a buoy floating on top of the water. Each rectangular cage has a hole at one end where the eels enter, lured by the luscious smell of chopped up horseshoe crabs, harvested from the bay in May and kept in a freezer until needed. “Eels love the eggs,” Bennett says, dipping his fingers into a cluster of tiny sacs. “They swim into the holes and get lost. He reels in an empty trap. There have been better days. 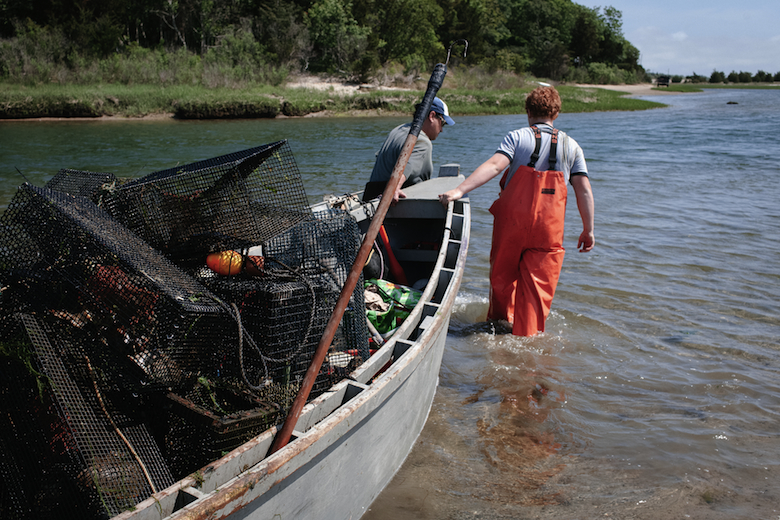 Will with family friend Justin navigating low tide in Springs. They didn’t have much success in the location where they first set these eel traps so decided to relocated them across the harbor. (2015)

The week prior, the fishermen hauled in a mother lode of jumbo eels, which probably ended up on someone’s sushi platter.

“There are ginormous eels in here for a pond this size,” he says, playing with a lone eel in the bucket. “You know eels bite, right?” Another pot comes up empty. “Are you kidding me?” he says. “The one lonely eel might be going back.”

“I’ll deep fry him before you throw him back,” says Justin.

A shorebird takes a nosedive nearby. “A tern diving for dinner like us trying to make money to buy dinner,” says Bennett.

Fresh Pond is 10 feet at its deepest, more saltwater than fresh, sandy around the edges and “all muck” in the middle, just the way the eels like it. Although the empty pots say it’s time to move onto greener pastures, it’s so beautiful it’s almost sad to leave. “This pond here is so peaceful,” says Bennett. “You don’t have anybody else.” The only other visitors are one swan, a pair of mallards and a couple of geese with goslings.

As each pot is lifted, it’s loaded back into the boat. “We’re taking the pots out and moving them to a different spot today,” he says.

Back at the landing, the pots are neatly stacked in the pickup truck before heading off to Three Mile Harbor in East Hampton. Once there, Bennett tells Justin, “Bait ’em and put zip ties on ’em. You know the routine, right?”

Before long, they’re back in the water, working their way into a small channel. “Always throw the pot over with bungee facing up,” he says, steering the boat at the stern. “Don’t ever go swimming in here. You will die in mud.”

An osprey flies overhead toward its nest on top of a tall pole. Oysters are duly noted for future fishing adventures and pots are being tossed in every direction.

“My instincts say there’s eels right there,” says Bennett. Then the last pot sinks to the bottom. “This boat’s going to get a good scrubbing when we get back.”

There’ll be no trips to the seafood shop today. There’s just enough for dinner, but cleaning eels is not the fun part; they’re slippery and even after the head is cut off they still move for hours. “Sawdust or coal ash gets slime off eels,” Bennett says. “Hopefully there’s some back at the garage.”

“They will taste good though,” says Justin. “Skin ’em and deep fry ’em or smoke ’em.”