Delivering a delicacy to the Hamptons requires style and stamina. 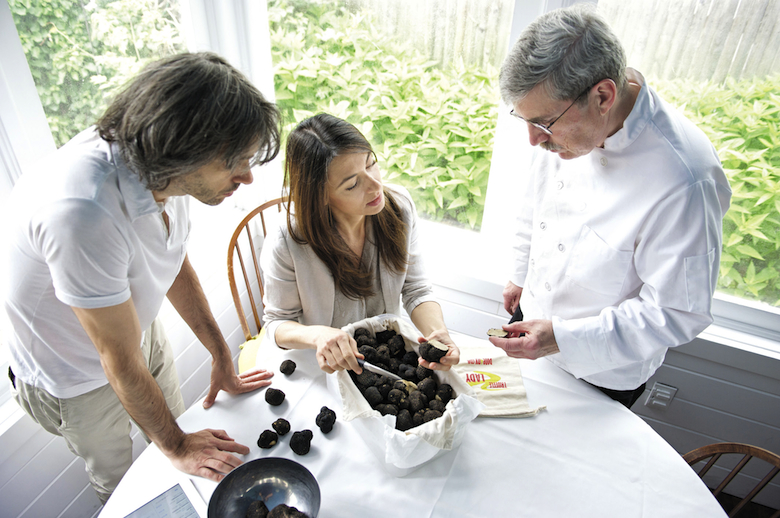 “Two pounds! Two days! Gone!” barks chef Starr Boggs as he greets Francesca Sparvoli, aka the Truffle Lady, at his eponymous restaurant in Westhampton Beach. With long brown strands flowing along a face straight out of a Modigliani painting and a white tight fitting dress, Sparvoli could be strolling to her next fashion shoot, but the rolling coffer she lugs everywhere hides much more than a makeup case. “I carry edible diamonds,” she says, smiling.

She reaches down and out comes a straw basket overflowing with plump summer truffles just in from Italy. Instantly, an intoxicating earthy aroma wafts over the bar.

As she handles the goods, Sparvoli often wears white gloves, adding to the ritualistic sensorial experience. To help her focus, she closes her eyes before she inhales the fragrance.

“We are passionate about what we do, so we need purveyors who are as passionate as we are,” says Boggs.

“Every week, we drive from the city to the Hamptons,” says Sparvoli, “so chefs can see the new batch and pick their own.”

“I’ll need a pound this weekend,” says Christian Mir at Stone Creek Inn in East Quogue as he sizes up one massive specimen in each hand. “I slice them over my striped bass.”

“I should have bought five pounds the last time you were here,” says Kyle Koenig a few hours later at Topping Rose House in Bridgehampton. Instead, the chef had to have some sent to him. “Our fazzoletti with summer truffles turned out to be our number one best-seller.” 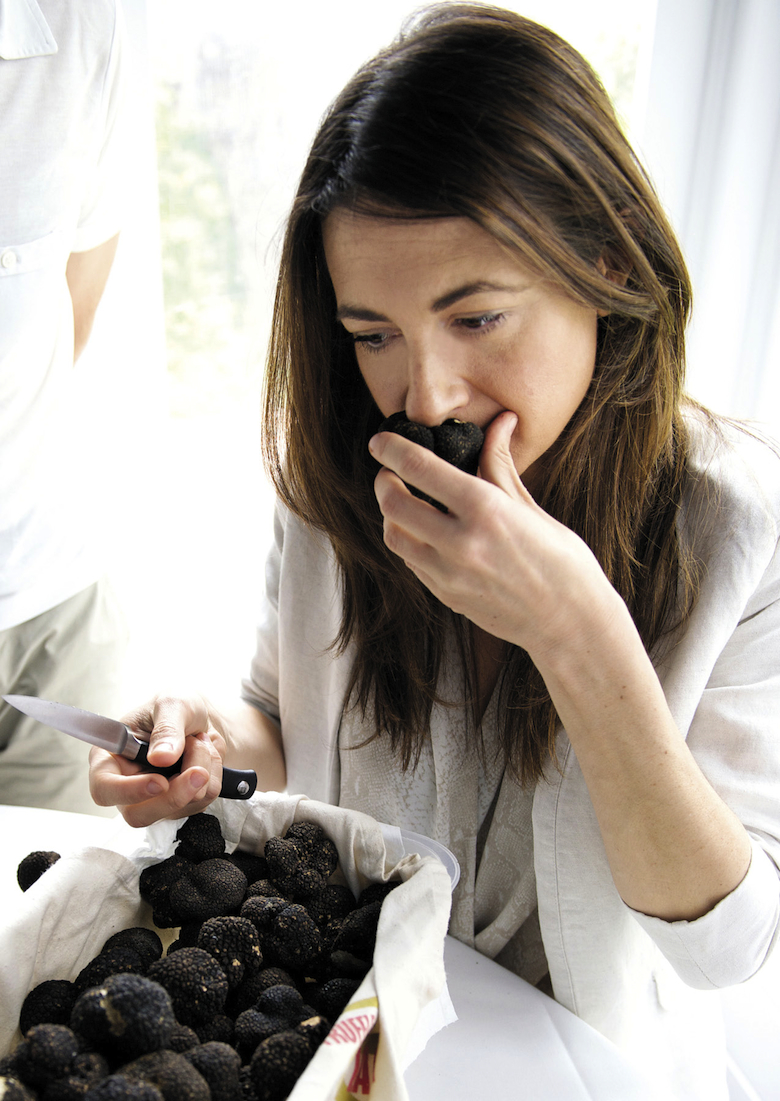 In 2012, Sparvoli and her partner, Marco Bassi, traded their dolce vita for the American dream. In their luggage, they brought his business acumen and her innate flair for the best truffles, honed by three generations of experts back home in the eastern Italian region of Le Marche. Together, they created Done4NY, a company specializing in importing truffles, mushrooms and preserved products. But they kept hearing about a mysterious lady who delivered truffles to chefs from a limousine in the 1980s. “So now, I am the truffle lady!” says Sparvoli.

“My father, a retired banker, is now both the clearinghouse and the crucial link between us and the truffle hunters,” she says. “But the whole process is still shrouded in mystery.” Accompanied by their dog—only one dog per man is allowed—the hunters sometimes park their car as far as five miles away from their secret patch to ensure they’re not followed.

Two or three times a week, a shipment arrives at JFK. “We live at the airport,” says Bassi, long grayish hair and sparkly blue eyes. “There are so many forms to fill out.” 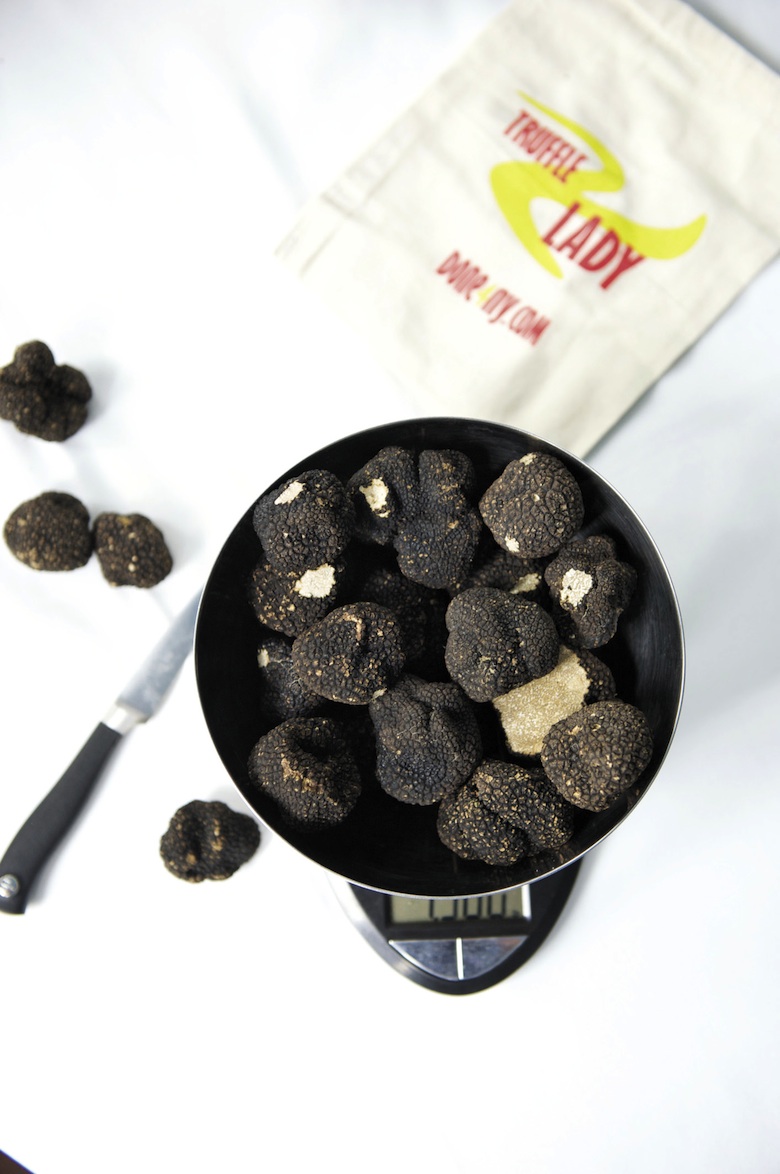 “Then suddenly we have a ‘truffle emergency,’” says Sparvoli, laughing as she mimics a 6:30 p.m. call from a hysterical chef in the throes of truffle withdrawal. “We drop everything and rush to the restaurant.”

During our summer, Sparvoli and Bassi sell summer truffles from Italy but also winter black ones from Australia. In the winter, they sell black specimens from France and Italy, but it’s fair to say that the most precious and pungent of all are the white truffles, only available in the fall. So why the smell?

“The mushrooms grow underground, but they need the wind to proliferate,” says Sparvoli. “Since they don’t have the power to spread, when they are ripe they exude a scent so strong it attracts animals who dig for them and help spread their spores.”

To the novice, summer truffles are a good introduction. Their scent may be a bit slight, but they cost about 10 times less than black winter or white ones. In 2007, a giant white truffle weighing 3.3 pounds was sold at auction for a record breaking $330,000. No word on how many gourmets it fed.

“In Manhattan when we visit our chefs, we have more time, so we often sit down with the staff,” says Bassi. “We tell them the story of our company, we taste and compare different kinds. Almost all white truffles grow in Italy,” he adds. “It’s a coincidence that the soil, the weather and the humidity all converge to create this delicacy.”