David Rosengarten, who most of us know for his encyclopedic knowledge of food, grew up in a Brooklyn household obsessed with the foods of Italy. 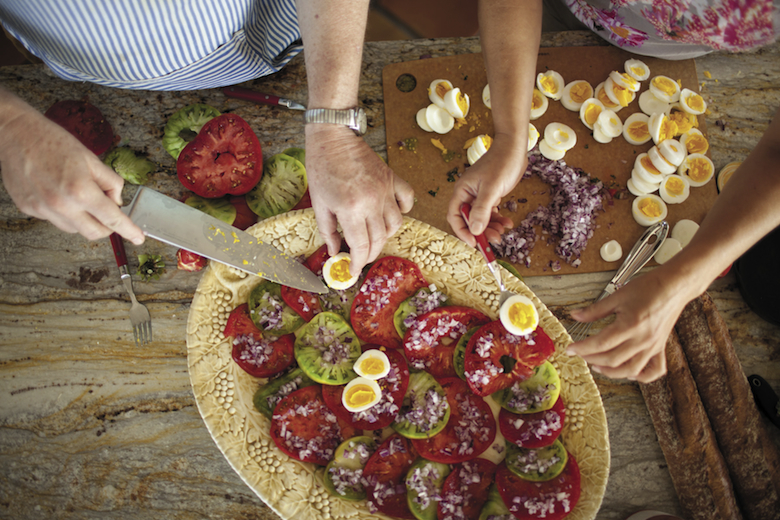 David Rosengarten is an unlikely name for someone elbow deep in anchovies, linguine and shrimp fra diavolo, but in the funny old way New York transforms us all into something unexpected, Rosengarten, a Jewish boy from Brooklyn by way of Rockaway, is embracing his Italian-American roots just the same.

“I was nine before I realized that we weren’t Italian,” says Rosengarten as his practiced eye inspects the alici salati, or salted anchovies.

It is not so far-fetched. Rosengarten, who most of us know for the exalted tastes and encyclopedic knowledge of food he demonstrated in more than 2,500 episodes on the Food Network, the celebrated Rosengarten Report newsletter (more on that later), his award-winning cookbooks and reviews for publications like Wine Spectator and Saveur, grew up in a household obsessed with the foods, flavors and even the sounds of Italy.

“My uncle was a big man in the garment industry, which back then was all Italians and Jews,” says Rosengarten as he prepares a nostalgic meal in the light-drenched waterfront kitchen of the Amagansett home of his business partner, Sylvia Golden. He stops mincing red onion for a moment and smiles. “Not only were his business partners all Italians, they were the Lucchese [crime] family. It was the ’50s and ’60s and the mafia culture. So my dad, who was also in the garment industry, listened to Italian opera and made mostly Italian food.”

On weekends the family hunted down great Italian restaurants much as Rosengarten still does. Those early trips inspired today’s first dish. 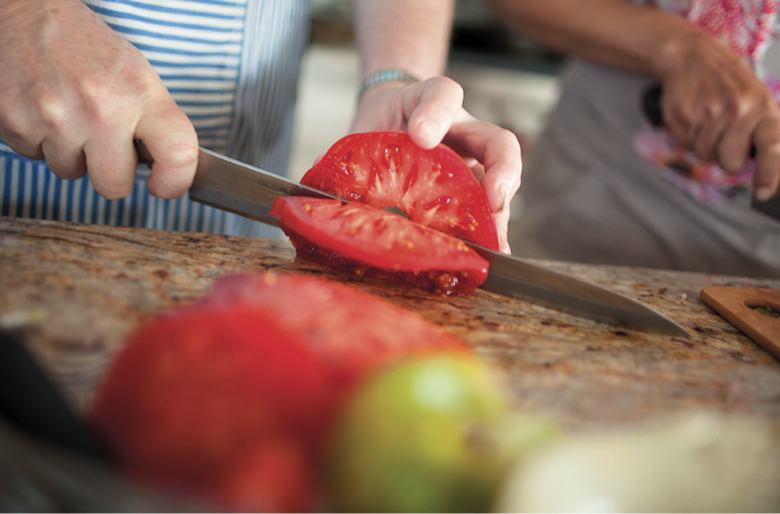 “This is Vito’s Tomato Salad,” says Rosengarten as he and his guests and I — for David likes a companionable meal — slice the meaty heirloom tomatoes, peel the eggs, prep the anchovies and start piling up the goodness in colorful stacks. “I wish I could remember where the restaurant was, I believe on the South Shore. Anyway, Vito was an Italian chef from Trieste and he did things so differently from everyone else. We went back again and again. He inspired me and that’s where this salad comes from.”

Then there was Angelo. “Angelo was from Naples and had a restaurant on Flatbush Avenue,” Rosengarten says, making a quick decision that we should do the bread Angelo-style. He chops more garlic, because can there ever be enough? “I still think he was the best chef I ever met. He would slice the bread, add olive oil, salt, garlic and more olive oil and toast the bread in the olive oil.”

Rosengarten senior loved food so much he opened a seafood restaurant across from Madison Square Garden (and walking distance from his dress fastener business). And that is why David Rosengarten might not have ever entered the food game. 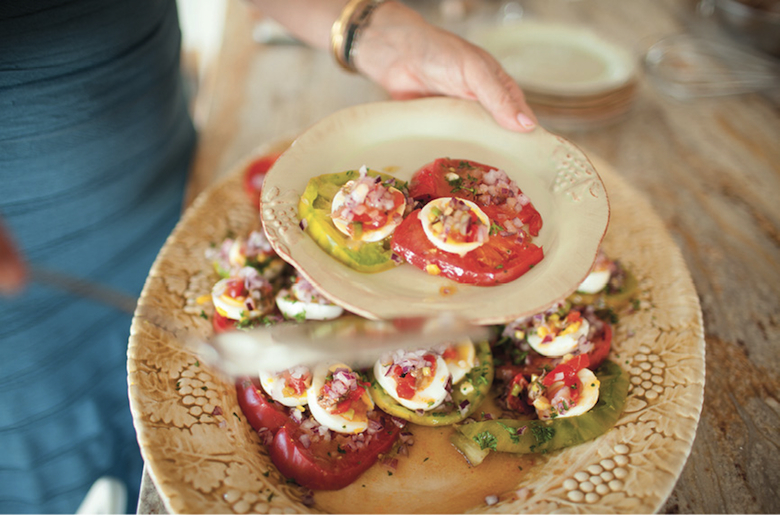 “My dad got burned in the restaurant business and lost everything,” he says. “I looked at that and said, ‘I am never going to do this.’” Rosengarten went on to Colgate University where the house he shared had boarders. “We had 12 people come to the house for dinner,” he says. “I said, ‘I like food; I like to cook. This could be a business.’” He studied and dived into global cuisine but wouldn’t commit to food, going on to do a PhD in theater at Cornell University and teach at Skidmore College. But the draw of the kitchen was powerful.

“There was a woman in town doing cooking lessons,” he says. “I asked if I could teach some classes … and she said yes. I soon realized ‘Hey, I like this better than teaching theater.’”

In 1983 he came to New York to “take a shot” and launched at breakneck speed. His first article was for Gourmet, followed just months later with a steady gig at the Wine Spectator. He went on to write for virtually every major food publication in the country, wrote cookbooks and the James Beard Award-winning Rosengarten Report, which tested culinary products in a relentless search for the best food available and shared the results with 50,000 paid subscribers.

In 1993, theater, food and teaching all came together when the Food Network went on the air. Rosengarten co-hosted its very first program, Food News and Views. He quickly proposed a cooking show that would guide viewers on how to marry food and wine.

“Taste was the most important thing that happened to me professionally,” he says today. “I still get people literally every day, stopping me to say how much they loved the show. It’s kind of a life-changer.” 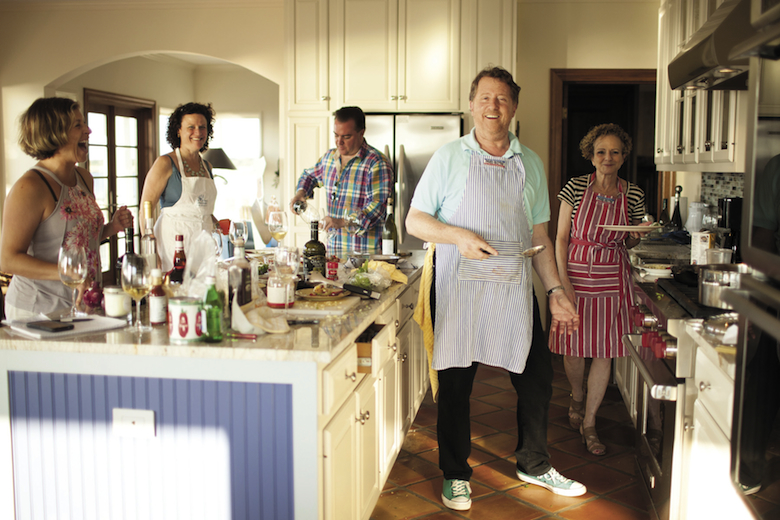 We are making the linguine with white clam sauce now and it is once again all hands on deck as we smell the beautiful East End clams and chopped parsley. As he cooks, professor meets performer. He doesn’t miss a knife stroke as he explains why he’s chosen curly parsley (“It holds together better chopped”), why the clams are already shucked (“The shells look pretty, but I find that by the time they open they are tough”), about the wines (“Wine snobs think you have to drink an older, bigger Chablis, but for this dish, you need something lighter — this petit Chablis, a 2012 Phillip Goulley, is crisp, tart and graceful and perfect”).

Taste ran until 2001. Rosengarten continues to make television appearances and speak and judge at international food events. He writes for the Huffington Post and Forbes regularly, as well as other publications. In 2012, he began to use his expertise and world travels to bring exclusive wines and other fine products (like Petrossian caviar) to the United States through his website drosengarten.com.

“My real job is finding great things to eat and drink and letting my readers know about them,” he says. “I am always on the prowl for the greatest stuff, and if it is not available to people here, I will get it for them.”

To this end, he has just brought back Rosengarten Report. And that plays into his theme for today’s meal. We have sopped up the last of the white clam sauce with Alfredo’s wonderfully garlicky toast and are moving into shrimp fra diavolo. The astonishingly deep and bright conserva of tomatoes from Mount Vesuvius is another new discovery of his research for the first issue of the new Rosengarten Report. “I tasted the products of 50 to 60 different importers,” he says excitedly, “and whittled it down to the three I think are the best.” 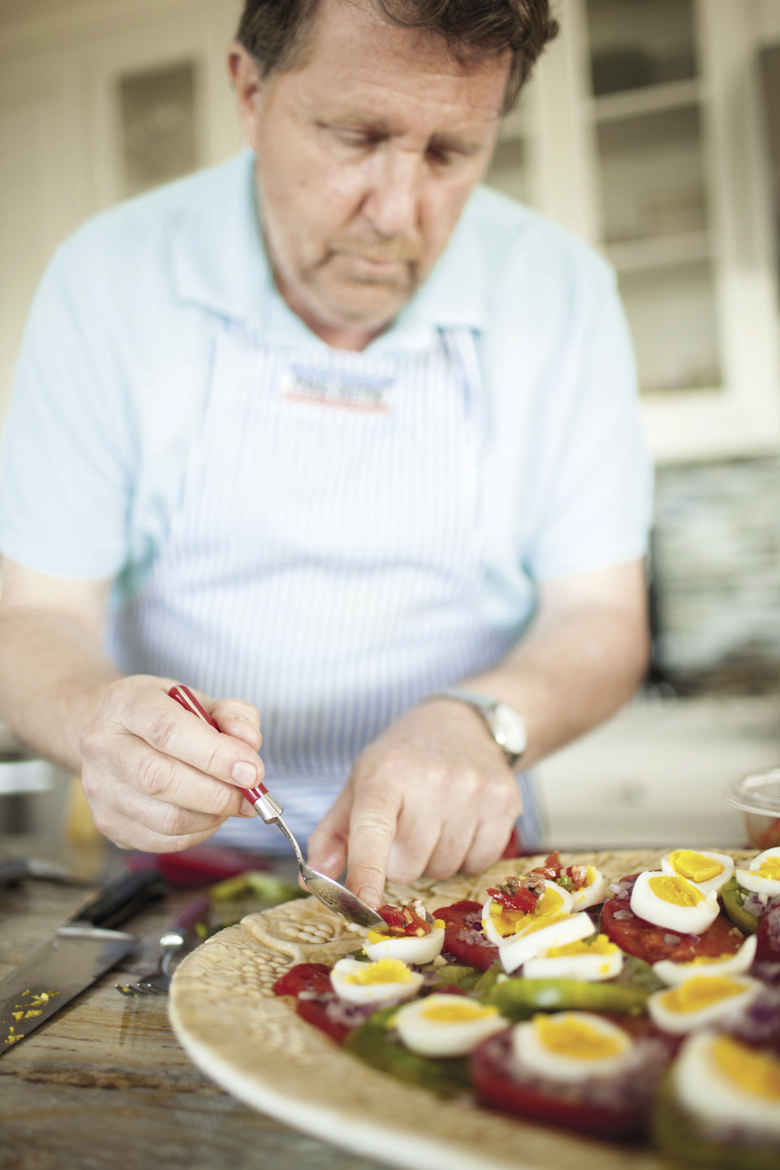 But don’t think that just because it is David Rosengarten’s selection, it is about the most expensive or fanciest items. He calls them soulful. “It’s the love and care that goes into the product, not the cost,” he says as the sun sets over Napeague Bay and we finish with grappa-laced whipped cream and fruit, tea and coffee.

He might be saying that about his own work. It’s not about showing off what he knows but discovering the soul of the thing, the best expression of a taste or a dish or a product and sharing the excitement with the rest of us.