On the Menu at Surf Lodge: Bhumi Farms Produce

The Montauk restaurant is working with East Hampton farmer Frank Trentacoste to make sure the freshest ingredients end up on your plate.

A thick fog blanketed Montauk village last Sunday. A few miles away at the Surf Lodge, the sun was shining brightly.

“The bar opens at twelve,” our waitress said guiding us to our table, “You’ve got twenty minutes.”

Although known for a party atmosphere, the vibe was mellow enough to tuck into some warm banana bread with mascarpone, local berries with ricotta and mint and a watermelon feta salad with baby basil and basil seeds. It is summer after-all and Australian executive chef Chris Rendell is taking full advantage.

The chef is working closely with farmer Frank Trentacoste of Bhumi Farms in East Hampton, and after a slow start to the season, is finally reaping the rewards.

“We met last year when Frank started dropping off small trays of produce to the Surf Lodge,” says Rendell, “We started talking towards the end of the season about the chance to have some land and grow what we needed.”

In addition to the farm items on the regular menu, such as soft herbs and summer squash, nightly specials are created from the weekly produce list. 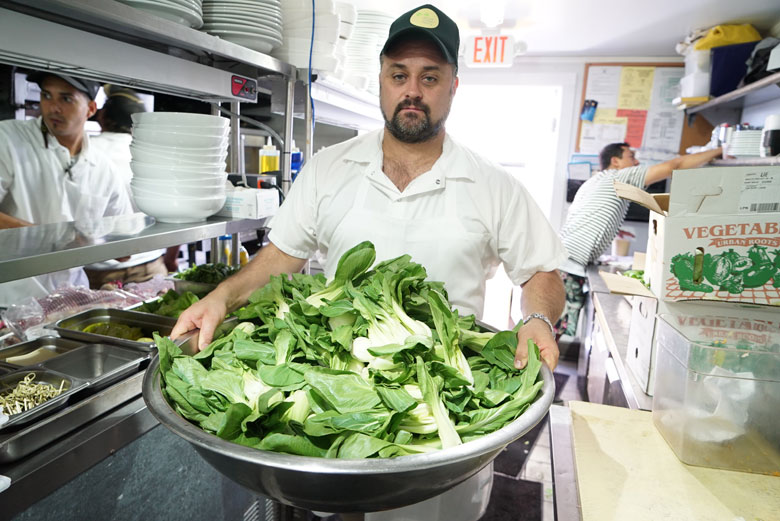 “This week we will be using the purple haricot vert, radish and purslane in a raw salad preparation.” he says. “Parsley goes into a variety of dishes, bok choy for the curry and peaches will be used in brunch. For me, it was not only a great chance to have local produce but also a chance to see, work and experience small farming first hand. A great deal of the staff have spent their days weeding and just helping out.”

In addition to what he curates at Bhumi Farms,  Rendell uses Good Water Farms microgreens, grown in a greenhouse in East Hampton and fruit from the North Fork.

If running the busiest restaurant in Montauk wasn’t enough, the chef works at his own restaurant Flinders Lane,on the Lower East Side of Manhattan, which serves “modern Australian” cuisine, during the week and commutes to Surf Lodge on the weekends. No worries, though, chef de cuisine Thomas Beck has his back.

Sunday brunch was as laid back as Montauk gets in the summer. Fort Pond breezes wafted through the open dining area and a lobster roll called my name. It was tried and true.

The Surf Lodge sells more than 500 lobster rolls a day. But what’s brunch without a side of bacon? In this case, thick strips of Nodine’s Smokehouse bacon are served with the Big Breakie: two poached eggs, slow roasted tomatoes, portabello mushrooms and baby spinach straight from the farm.

“It’s amazing when you can see the whole process from working the land to serving a table and telling the customer that you actually helped pick that produce a few hours ago,” says  Rendell.

Heirloom tomatoes and watermelon, currently ripening on the vine, will be plated soon. This party is in your mouth.