We had an amazing time at our How To Make Sea Salt workshop in Southampton this morning. Can't wait to see all of the families homemade sea salt! Big thanks to the @sofomuseum we can't wait for the next one at the end of August! 🌊

The she of the tongue twister may sell seashells by the seashore, but Shelly sells sea salt from the South Shore. Michele Martuscello, aka Shelly (get it?), takes the sea salt from our South Shore to the people and the people of the South Shore to see the sea. Martuscello, owner and salt maker of Shelly Sells Sea Salt From the South Shore, joins Amagansett Sea Salt and North Fork Sea Salt as the first woman in the East End sea salt trade. During the week, she works as photo editor at Parents Magazine, but each weekend — wetsuit and all — she harvests a new salt batch year round, except during late hurricane season.

Harvesting and preparing your own salt is simple enough that she is willing to show whoever wants to learn. In July, Martuscello teamed up for her second summer with the South Fork Natural History Museum and Nature Center (SoFo in city fashion) and gave a beginner’s sea salt harvesting lesson.

The process is simple: Fill a five gallon bucket with seawater from just past where the waves break, bring it back to shore and strain through a coffee filter. The brine left over can be left to evaporate or gently boiled and then left to evaporate —Martuscello prefers the latter just as an extra safety precaution — and voila! you have sea salt! A five-gallon bucket of sea water makes about a pound of salt. 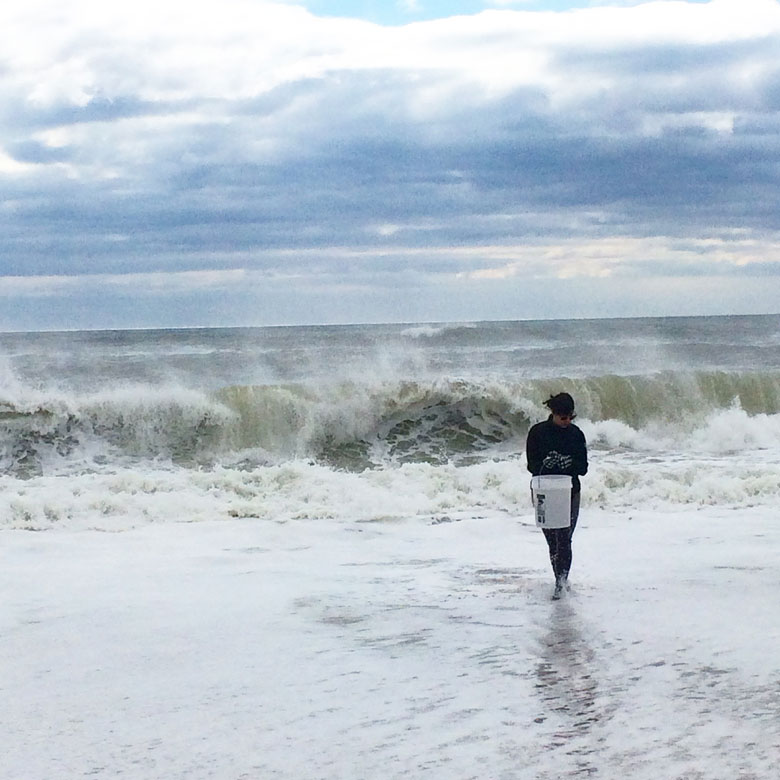 Martuscello grew up in and is based out of Westhampton Beach. There, she often takes long walks with her mother on the beach after dinner. On one such walk seven years ago, they wondered if they could harvest salt for themselves. “I loved the idea,” she says, “that my family could make the one item they used the most in the kitchen: salt.” Geography, food and family all come together in this one necessary ingredient, one indispensable to an Italian meal or any for that matter. Initially, the salt was just for family. Then demand from relatives and friends and friends of friends and those they told about the salt led her to incorporate two years ago. The name of the business was a “no-brainer,” she says, between her love of the beach, her nickname, and her father’s repetition of the old-fashioned tongue-twister. Mr. Martuscello was an inspiration to Shelly and pushed the importance of local food on the family. “He always went to the local butcher for the freshest meat, same for fish,” she says, “and when that first weekend in May came around he was always one of the first ones at the farmers market. He would say ‘the early bird gets the prosciutto bread!'”

While she is certainly in the salt business now, Martuscello loves sharing the process so that others may harvest for themselves. “To watch the kids, parents, and other participants gather water to take home, apply my lesson, and to create their own salt to share with their family is the sweetest part,” she says. The ocean is all of ours and nobody’s alone, and with Shelly’s approach to sharing, you can expect other families on the East End to make salt harvesting a family tradition.

The next salt harvesting session will be at Road D in Southampton (it’s a bit tricky to find, so e-mail Shelly for directions) on August 29 at 10 a.m. You can buy Shelly’s Sea Salt by e-mailing ShellySeaSalt@gmail.com or stopping by Atlantic Seafood (Center Moriches) and Mambo Kitchen (Westhampton Beach); Revolve Hair Salon (Southampton) carries her Sea Salt Texture Hair Spray.