Village greets Hermione officers with dinner, local wine and beer, and capped off by dancing in the park. 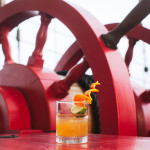 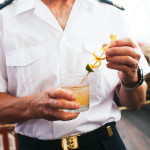 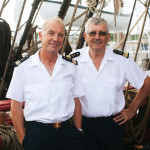 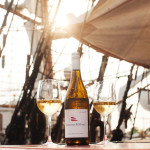 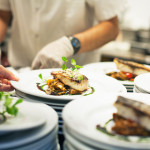 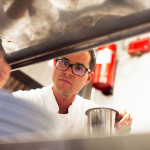 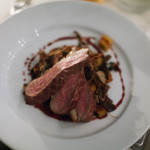 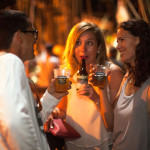 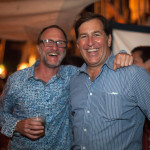 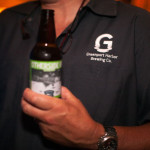 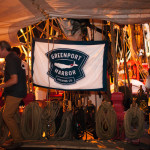 Captain Yann Cariou and ship superintendent Bruno Gravellier, dressed in splendid white uniforms, strolled onto the aft deck of the tall ship Hermione, ready for an evening of Greenport hospitality and some of the finest food and drink the East End has to offer. There to greet them were Joan Bischoff, a member of the Greenport Business Improvement District, and Nicholas Planamento; both are with Town & Country Real Estate. Their sailboat, Jaunty, had been in the enthusiastic flotilla that escorted the Hermione into Greenport Harbor that morning, July 6, a stop on the ship’s first visit to North America along the East Coast. The captain did not speak much English, but the local representatives had more than a smattering of French, and on hand was that universal gesture of welcome, a nice, cold cocktail.

This was not just any cocktail; this was the “The Marquis de Lafayette,” made of a marriage of Sag Harbor Rum and that classic French liqueur, Cointreau, an homage to the American Revolutionary War hero and French citizen who sailed on the original Hermione in 1780 to offer crucial aid to our brand new country. The cocktail was built and poured on the spot by winner of the Greenport Tall Ships Challenge cocktail competition, Dan Docktor of  Soundview restaurant, and Soundview owner Rachel Levin. It was topped with a clever garnish of lime wedge and orange peel that looked like a tall ship in full sail.

“Salut!” said the captain, and after pausing to enjoy his drink, he set off down the dock and across the street to Noah’s restaurant, where a multi-course dinner and about 50 guests awaited his arrival. Among the crowd was Aldo Maiorana, the Italian/French longtime owner of Greenport’s Aldo’s coffeehouse. Aldo, as he is known by one and all, is an artisan coffee roaster and a bit of a local hero; he is credited with driving Starbucks out of Greenport with his superior brew. Also there was Hervé Blanché, the mayor of Rochefort, France, where the Hermione was built, and Peter Clarke, president of the Greenport BID and organizer of the dinner.

First up were a Satur Farm butter lettuce salad, and chilled Latham’s asparagus soup with lemon oil, shaved parmesan cheese and chives. Both were paired with the Kontokosta 2014 Sauvignon Blanc. The wine is fresh, zingy, and a credit to consulting winemaker Gilles Martin, a French transplant who has for years has produced some of the North Fork’s best wines, especially sparkling wines.

Next, pan-roasted local striped bass from Gosman’s dock; the fish skin was crunchy-crisp, and the meat itself moist and flaky. It perched atop a ragout of roasted carrots and eggplant from Orient Organics. It was paired with the Kontokosta 2012 Cabernet Sauvignon which, being young and rather assertive, was an appropriate example of American red to serve to the French visitors.

Chef and restaurant owner Noah Schwartz was, of course, busy in the kitchen, artfully plating the third course. It was sliced breast of Crescent Farm duck over duck confit, local potatoes and The East End Mushroom Company mushrooms, a multilayered homage to the local farms. The sauce was a tangy, sweet reduction of Kontokosta red wine that set off the duck just so. “It’s the little touches that make a dish successful,” he said, drizzling a swirl of sauce onto each plate.

Out in the dining room, Rich Vandenburgh, co-owner of Greenport Harbor Brewery, was having a grand time before heading to the second party of the night, his brewery’s bash on the deck of the ship itself. “Such joie de vivre in the room!” he said, looking around and smiling. “It’s so exciting to be here to break bread with the captain and his crew.” He particularly enjoyed the duck course, because it was paired with Greenport Harbor’s latest addition to their taps, the “Loud American.” It was an amusing choice, but if any of the French contingent noticed, they were too polite to comment.

Last up was a delightfully wobbly vanilla bean panna cotta, with roasted Sep’s Farm strawberries. It was paired with some rather fun speeches, including one by local resident and retired UN ambassador Francis Dubois, who announced in his charming French accent, “If you do not like Greenport, you may not enjoy Paradise.”

Then it was back to the ship for more merriment and a great view of Mitchell Park, where the first of the summer Mondays concert series was in full swing. The festive atmosphere in the park was made that much better by the sudden arrival of dozens of the Hermoine’s young crew members, who finished out the evening with a boisterous, impromptu chorus of French sea shanties, which, happily, remain untranslated.