The Freshest Rosé on the East End: Finca Wölffer 2015

The Sagaponack winery has expanded to Argentina. Maybe they’ll never run out of rosé!

Finca Wölffer Rosé, the newest addition to Wölffer Estate’s lineup, hits the wine shops this Fourth of July weekend. “Oh, look; more pink wine for the Hamptons!” you are thinking? No; it’s really unique. And, as we all know, summer is all about drinking interesting rosés, so you might want to seek this one out.

First of all, don’t let the sea of mediocre imported rosé fool you into overlooking local efforts. Wölffer in Sagaponack has a rosé program that strives for the highest quality. These are wines made on purpose, not as byproducts of red wine production, and nothing like the mass-produced pinks churned out by the other coast.

The Finca is from the 2015 harvest. Yes, 2015. It was bottled about a month ago, and literally just arrived by boat about two weeks ago. Finca is a Spanish word that means “ranch.” Figured it out yet?

“The idea is to make a fun, elegant wine that is very different from most wine produced in Argentina,” says Wölffer winemaker Roman Roth. “I think we really succeeded.” That’s right; this wine is from the Southern Hemisphere, where the seasons are reversed, so these grapes were picked in our springtime, which was their fall. “We felt we could bring to Argentina our deliberate, focused approach to making sophisticated and elegant rosés,” he adds. 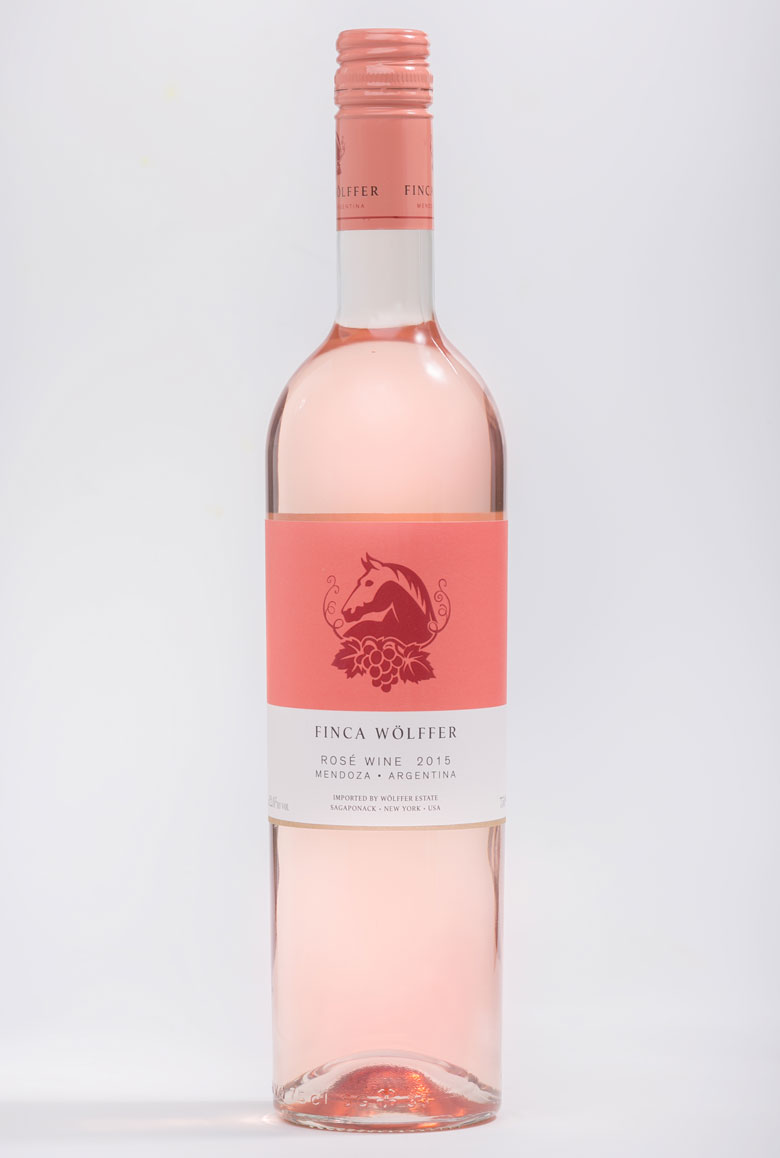 Most rosé there is made by the saignée process, in which juice is “bled” off early to reduce the juice-to-skin ratio, to make a more intense red wine. The pinkish leftover juice is made into rosé. That’s perfectly acceptable, but the focus is the red wine, so the grapes ripen longer. Rosé grapes should be picked earlier to maintain freshness and acidity. In fact, the word often used to describe saignée rosés is “flabby.” And flabby, of course, is just not Hamptons.

Specifically, the Finca is 52 percent malbec, 11 percent pinot noir, 11 percent pinot gris, 10 percent bonarda, 8 percent torrontés and 8 percent cabernet sauvignon. The grapes were hand-picked, gently crushed and pressed, and the juice underwent a fairly cool fermentation. It’s 12 percent alcohol, with only 1 gram per liter of residual sugar. Taste-wise, it’s crisp, lean and dry, with fruit notes of gooseberry and strawberry, fine, light tannins, and an exciting mineral note that speaks of another continent. I had friends over for a late lunch/playdate, and poured it with a grilled leg of local lamb done with a fresh-herb chimichurri thing, which is about the extent of my South American culinary repertoire, and striped bass. It definitely works well with barbecued meats and fish.

It turns out that Wölffer’s founder, the late Christian Wölffer, really liked Argentina for its wine and equestrian pursuits, and often spent time there. He planted 10 acres of malbec in the Alto Agrelo-Lujan de Cuyo region at the foot of the Andes. Son and winery co-owner Marc Wölffer expanded it to 20 acres. It’s an arid, cool climate with loam soil that’s just right for the more European rosé style Wölffer Estate likes to make, Roth says. The wine is made in partnership with Dominio del Plata in Mendoza, under the direction of the Wölffer team and with the help of Susan Balbo, their consultant in Argentina.

“The wine was made by e-mail,” says Roth. After his initial visit with Marc Wölffer and general manager Max Rohn, they and the Argentina team were in constant communication, exchanging blends, tasting notes and ideas. “It’s extremely exciting that we on Long Island can make wine internationally.”

The plan is to increase production from this year’s lot of about 3,000 cases to at least four times that amount. This should help cover the shortage of Wölffer rosé that invariably occurs by early fall, when the weather is still great and people aren’t yet ready to shift to winter reds. Go to Wölffer Estate to find out where it’s being carried.

As for visiting the region, Roth says, it was memorable. The vineyards are in a remote area, above 4,000 feet, right at the edge of where the water supply stops. Beyond that is high-altitude desert stretching up to the Andes. The air is pure and clear, and in the morning, watching the sun light up the mountains above the vineyards was spectacular. He can see why Christian loved the place, he says, and is very happy this project is turning out to be such a success. “We finally realized Christian’s dream of making wine in Argentina,” he says.