Koppert Cress Presents: How to Taste Herbs in 4D

Koppert Cress, in partnership with Dutch culinary magazine Food Inspiration, gave away one hundred microgreen tasting packages with 3D glasses for a 4D guided tasting experience. And I got one 😉

Koppert Cress, in partnership with Dutch culinary magazine Food Inspiration, recently gave away 100 microgreen tasting packages with 3D glasses for a 4D guided tasting experience. And I got one 😉 Along with four ancient aromatic herbs (oyster leaves, majii leaves, apple blossoms, and Sechuan buttons) came a pair of 3D glasses with which to watch a short guided tasting tour (above) with Rob Baan, owner of Koppert Cress. 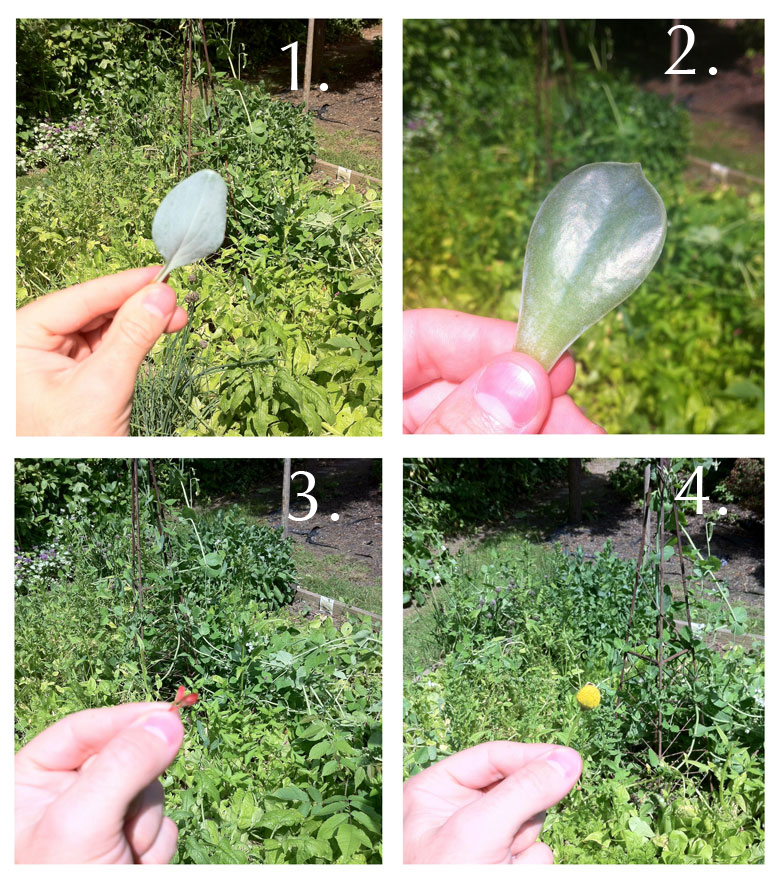 Koppert Cress gathers the most rare, heirloom varieties of aromatic herbs from all over the world and plants these ancient seeds in a special biodegradable fiber in a their state of the art greenhouse operations. “More and more chefs are breaking through their own boundaries, and exploring with vegetables and fruit,” says Hans Steenbergen, editor in chief for Food Inspiration. In partnering with the magazine, Koppert Cress “hope[s] that the sight, taste, and feel of these amazing plants inspires and innovates [the consumer’s] world of food just as it does for the chef,” says Natalie Dinina, brand ambassador at Koppert Cress. After receiving the package, herbs and glasses, you follow the Food Inspiration link to the video above and get to taste the herbs in sync with Baan as he elegantly describes each herb, and while watching the video in 3D. With the three dimensions of sight joined by another dimension of taste, Koppert Cress puts together a 4D simulation akin to the former Back to the Future simulator ride at Universal Studios, albeit with electric herbs instead of a jostling seat.

“Even without putting on 3D glasses the Sechuan button enters a new culinary dimension of taste that one could not imagine exists.”

The herbs are beautiful and intricate on the outside and then mirrored in their tastes. First is the oyster leaf, which tastes like, you guessed it, an oyster. Second is the majii leaf, a succulent which tastes like melon rind; Baan says it can be a holder of an added taste because it maintains moisture. Third is the apple blossom, the most enjoyable to eat by itself, a little red sprout branch that tastes like a slightly sweeter granny smith apple. And last, but certainly not least, is the Sechuan button. If there is a standout in this bunch, an herb to make you reconsider what you know about food the world over, this is the one. To be honest, I didn’t wait for Baan to start tasting, and as soon as I ripped open the package I ate a whole Sechuan button. Zzzzzz! The herb electrifies your mouth and feels like a battery (a 9-Volt battery Baan specifies) on your tongue. It’s bizzare and intense, and even without putting on 3D glasses the herb enters a new culinary dimension of taste that one could not imagine exists.

For Koppert Cress’s herbs, I can find no more apt a line than that of Ishmael from Moby-Dick: “Real strength never impairs beauty of harmony, but it often bestows it; and in everything imposingly beautiful, strength has much to do with the magic.” These herbs are going to be a major variable in serious culinary endeavors from now on and as far as taste is concerned, you have not tasted anything yet. 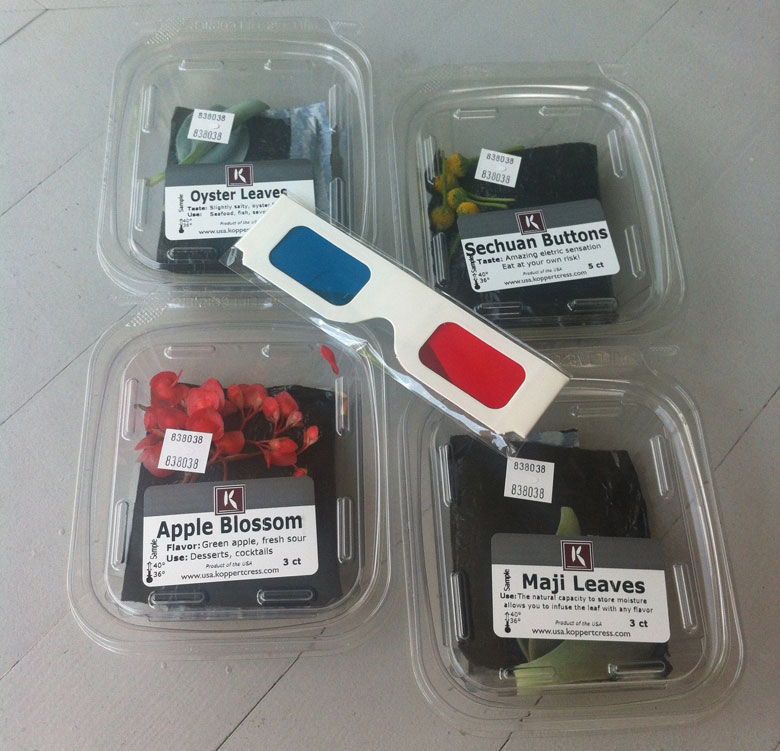 Here are some suggestions from Koppert Cress for food preparation with the herbs:

Oyster Leaves lend a fresh, oceanic flavor to salads, soups, and roasted vegetables. Their iridescence adds a beautiful aesthetic while their size and thickness are ideal for hors d’ouevres and amuse-bouches. A perfect ingredient for chefs looking to incorporate a seafood flavor profile into vegetarian, vegan or kosher dishes.

Apple Blossoms are a remarkable ingredient: outstandingly beautiful, elegant and flavorful. They complement tropical fruit desserts, fresh cocktails, and summer salads. Unlike other flowers, Apple Blossoms can even be used for plating hot dishes. Their slight acidity offsets rich ingredients such as scallops, meat, and seafood.

Majii Leaves: Oval-shaped leaves of a special succulent that originates from Africa. The leaves naturally store water for dry periods. This explains the name, which means ‘water’ in Swahili. Combine them with langoustine and green grapes, or with sour ingredients such as rhubarb. For the best taste combination, balance the Majii Leaves with sweet ingredients.

Sechuan Buttons have been used for a variety of foods, ranging from cocktails to pasta dishes, all of which created dishes that revolve around the unique electric effect of the button. More often than not the buttons serve as the perfect palate cleanser between dishes, and in some cases leading into another dish that then incorporates the button as well. With the Sechuan Buttons, “an ingredient straight out of Willy Wonka’s laboratory” (ha! spot on), Koppert Cress won the Innovation Award of the StarChefs Congress 2008 in New York City.