A new cookbook by a local chef and illustrator leads to a lesson on weakfish. 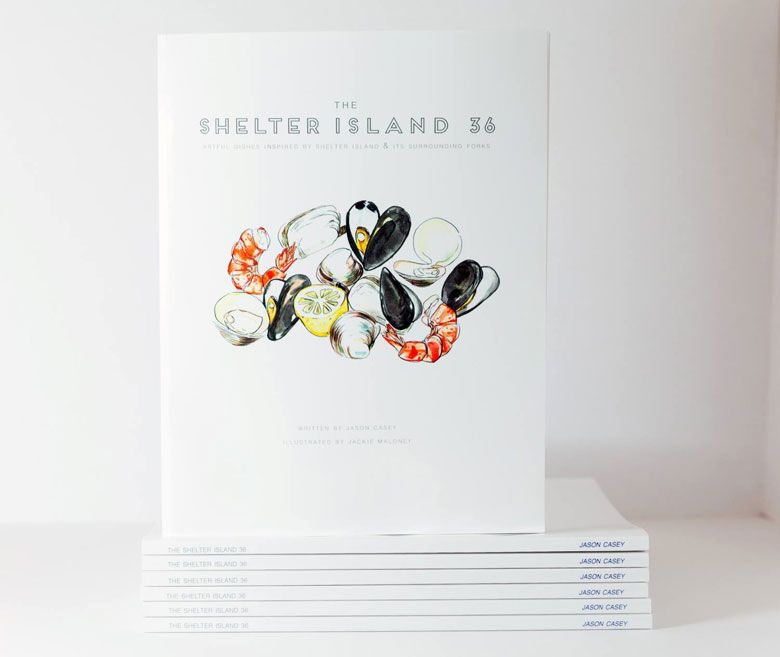 The Shelter Island 36 is a collection of New England recipes created by private chef Jason Casey and beautifully illustrated by Jackie Maloney. The artist and chef met at the Maritime Festival in Greenport where their tables were set up next to each other. “He was selling his lobster cookbook and I was selling my locally inspired paintings,” said Maloney.

The whole roasted weakfish, a rarity these days, is the collection’s centerfold. The iridescent sea trout is striking, with an olive green upper body, silver belly, inky spots and yellow-tipped  fins and tail. There’s been a pretty steady supply of the Long Island staple but nothing like the days of yore.

“For the most part, weakfish enter the Peconic Estuary from the ocean via Shinnecock Inlet and Shinnecock Canal. By the time the lilacs bloom in mid-May, the weakies are usually flooding through the canal with each opening of the locks and into Great Peconic Bay,” said avid fisherman Mike Wright in Noreast.com. 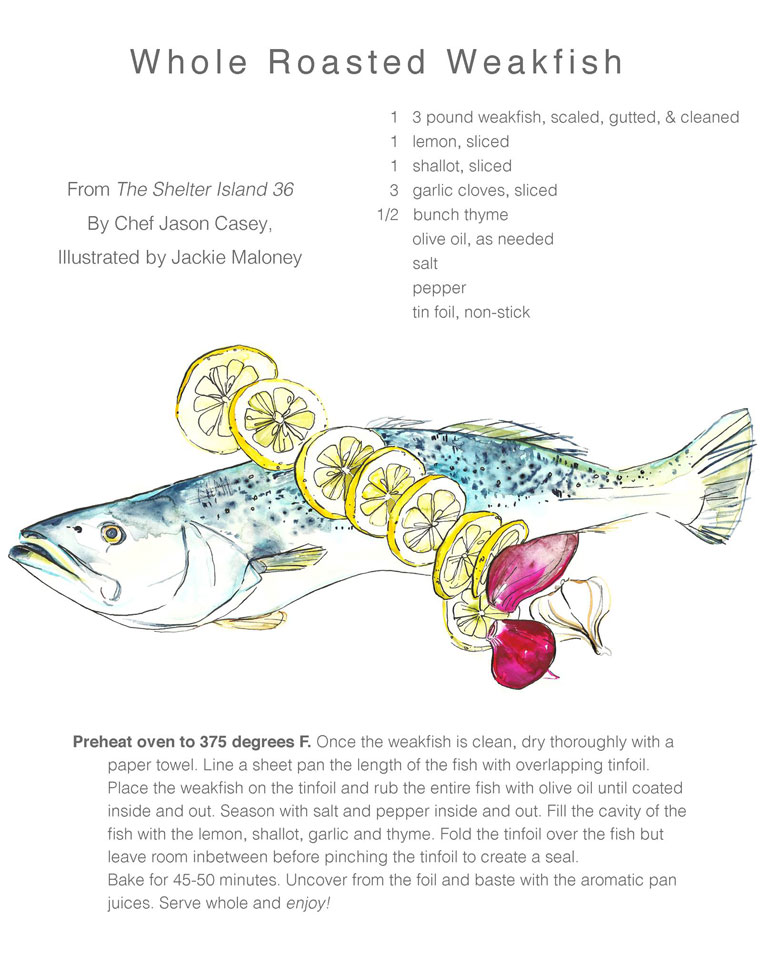 From there they spread eastward for the summer, swimming close to shore in same-sex schools, before heading south to the Chesapeake Bay in the fall.

“When I was a kid they were thick as flies in some years, but it’s been a long time since there were real ‘runs’ of them through the canal,” said Wright.

Cynoscion regalis have “weak” mouths requiring care when extracting them from the bait — most likely a drifting sandworm at dusk. They use good-sized incisors to bite into crabs, croaker, herring, killifishes, sand lance, scup, shrimp, silversides, spot, not to mention an added jig or whirligig, but their favorite food is squid.

Native Americans called them squeteague. More recently, scientists categorized the sea trout as part of the “drum” family because males create a beating noise using their abdomen and bladder. They spawn near Cape Cod and reach the East End when water temperatures hit 60 degrees, but it’s not just their sweet white meat that draw fishermen inshore.

“It’s very exciting to catch one,” said Wright, “I guess a lot of their appeal comes in their relative rarity and the fact that they are sort of tricky to catch.” Weakfish are strong swimmers and put up a powerful fight. A monster may be three feet long, nearly 20 pounds and 17-years-old. Top eel bed predators, they dart between feed bodies at a rapid pace.

“They come and go. You can never predict when they’ll show up,” said Charlotte Sasso of Stuart’s Seafood in Amagansett, “But the past week or so we’ve had a good supply.”

“Culinarily speaking, weakfish fall between striped bass and bluefish in terms of the oil content and the flakiness of the cooked meat,” said Wright.

Whether you got a lucky catch in the bay or in the market, add lemons, thyme, shallots, garlic, fire and you’re good to go.