Greenport Cocktail Competition: How to Honor the Tall Ships

A deceptively simple recipe by a veteran North Fork bartender takes the prize. 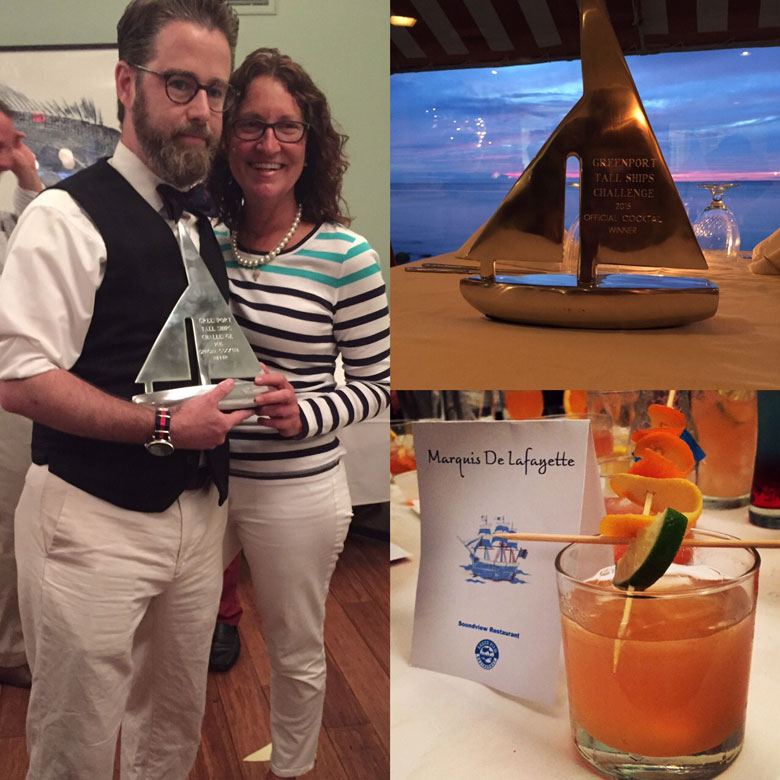 Dan Hoctor and Rachel Murphy, bartender and owner at the Soundview Restaurant, take home the prize for the best cocktail, the Maquis de Lafeyette.

“It’s a tough job, but somebody’s got to do it,” said Lia Fallon, as she tasted cocktails. Which one would take home a silver sailing ship trophy and get served to visiting dignitaries?

Ten cocktails later, they declared a winner, the Marquis de Lafayette, created by the Soundview’s bartender, Dan Hoctor. Hoctor is a smart, imaginative guy, and he clearly put a lot of thought into his libation. It’s named for the French hero who played a crucial role in the American Revolutionary War. “Without him,” Hoctor said, “we might not have won.” And the connection? The Hermione, a French-built replica of General Lafayette’s long-lost frigate ship and the star of the tall ships festival, sails into Greenport on July 6. History tells us that Lafayette said of the Hermione during her first voyage in 1780, “She sails like a bird,” and the new Hermione is the largest historic ship reconstruction project in decades.

So, what makes this drink the winner? Visually, it’s great, with a clever lime and orange peel garnish that looks like a tall ship in full sail. Taste-wise, it’s a Dark ‘n Stormy with a twist. Sag Harbor Rum makes the base, with spicy ginger beer and lime juice. Then, surprise! The classic orange liqueur Grand Marnier goes in. There’s the nod to history and a blend of American and French alcohols.

Also, in a critical sense, it’s a solid cocktail. That addition of just one extra ingredient to a classic Dark ‘n Stormy keeps it simple but makes it entirely new. The taste is a great balance among the intensely aromatic rum, the orange of the Grand Marnier and the light, fizzy spice of the ginger beer. The lime juice and bitters give it a zing, and lift it well out of too-sweet territory.

The award for the most creative cocktail went to Noah Schwartz, owner of Noah’s restaurant. Noah’s Tropical Storm is a vigorously shaken blend of Myer’s Dark and Platinum Rums, a splash of Aperol, pineapple juice, basil leaves, lime juice and simple syrup, garnished with a wedge of grilled pineapple. This iteration of the tropical rum-and-pineapple canon was a crowd-pleaser, but it’s not too sweet and fruity, as the complex notes of smoky grilled pineapple and herbal basil make it all grown up.

I also really liked the Marquis by Libby Koch of La Cuvee. It’s a beer-liquor blend, a trend we’re seeing these days; specifically, it’s Sag Harbor Rum, Greenport Summer Ale, fresh ginger and a rim of North Fork Sea Salt and brown sugar. It’s light, saline and fresh, and, I think, the best cocktail of the competition to pair with food. Next time you’re in Greenport, it’s worth the walk a few blocks up Front Street to check it out.

Also in the competition were: The Blue Canoe, Claudio’s, Claudio’s Clam Bar, First and South, Front Street Station, Brix & Rye and The Market. There are too many ingredients to list, but all the cocktails were creative and delicious. To try them, just ask for the competition cocktails at their home bars/restaurants during the tall ships event.