A Word with Chef Noah Schwartz 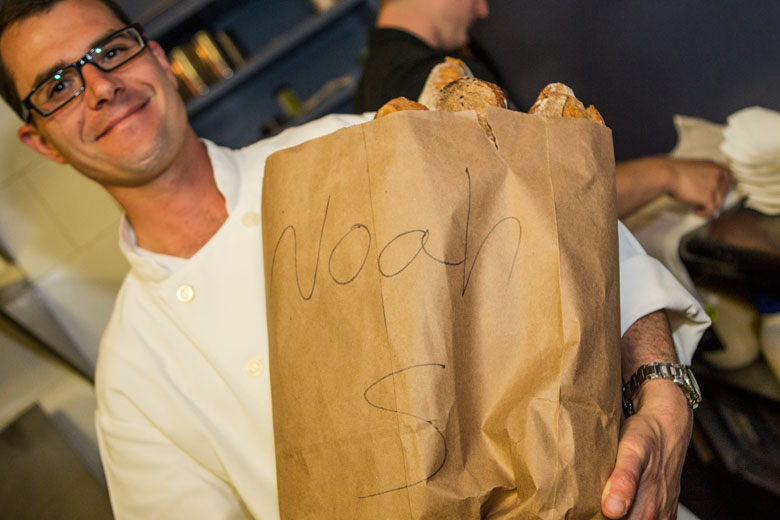 Have you ever wanted to get to meet the personalities behind the menu? We sat down with owner and chef Noah Schwartz of Noah’s in Greenport and Noah’s on the Road food truck. Looking back, his path to becoming a chef seems clear, although as a child he wanted to become a baker; his mother and grandmother baked, and he always wanted to lick the bowl. If he became a baker, he imagined a huge bowl in his future.

An adventurous eater, Schwartz has strong memories of meals that were unusual sometimes just because they were eaten without utensils. He was also influenced by his mother’s shifting dietary preferences: pescetarian, vegetarian and vegan. He took him to restaurants, including African where nothing tasted familiar, that opened new flavors to the future chef.

Because people come to a restaurant to try new things and find comfort in the dishes they previously enjoyed, growing and changing the menu at any restaurant is challenging.

As a teenager, Schwartz worked in a restaurant belonging to the parents of a friend. his job busing tables led to the kitchen. In college, he recognized that was where he wanted to be.

Schwartz opened Noah’s restaurant in 2010 where he experiments with different flavors and incorporates them into his oeuvre of food. Because people come to a restaurant to try new things and find comfort in the dishes they previously enjoyed, growing and changing the menu at any restaurant is challenging. Schwartz loves what he does: he makes food for people.

An excerpt of our interview with Schwartz:

What does food mean to you?

Growing up, I experienced my mom being either a pescetarian, vegetarian, and now vegan, and I was vegetarian for a few years, so I think the way I experienced foods led me to be open to people’s diets and to try different things. I remember going into the city for African food because it was veggie and mom could eat it and I remember thinking “These are big breads.” Everything was so interesting and flavored so differently.

What was your favorite dish growing up? What dish can you never make as well as you remember it being?

I don’t make it, but for a few years we lived with my grandparents and my grandma used to make this really great chicken souvlaki with pita bread and yogurt. It was really old fashioned and although I would never make now, I miss it.

Head over to North-Forks for the full interview.