The Buzz of a Bumble

A bumblebee doesn’t buzz just to hear itself sing. • Illustration by Dorothy Acierno 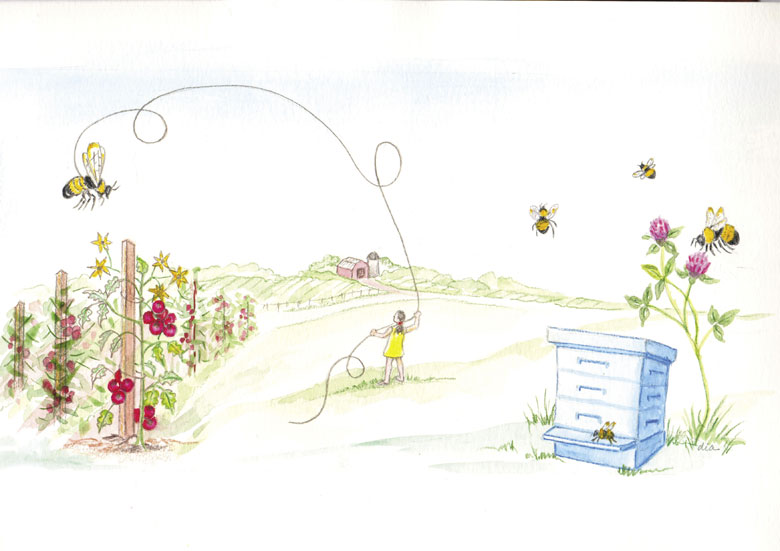 When we were little, the two things you didn’t do were use my mother’s sewing scissors for cutting paper (when she was looking anyway) and take her spools of thread for outdoor expeditions. The endless yards of silk thread just sitting there in her sewing basket—vibrant oranges, blues and reds so neatly wound on pocket-size spools—it was just too much for my brother and me to resist. Didn’t everyone know that sewing thread was really made for bumblebee leashes?!

On Long Island there are 17 species of bumblebees, and tying a thread around one is kinda easy. Their animated behavior and loud buzzing as they fly flower to flower always makes these teddy bears fascinating to watch and easy to catch. One swoosh with your butterfly net, a quick bowtie around the bee’s waist and you have a companion to pal around with for the afternoon. Only female bumblebees can sting, and they will only do so if they feel immensely threatened, so chances of being stung were minimal but did occasionally happen.

Tomatoes are a backyard gardeners pride in late summer, but before harvest one must ensure there are pollinated flowers; enter bumblebee, stage right. Although tomato plants are self-fertile, the flowers need wind or bees for a bounty of large, juicy tomatoes. Pollen does not move well by itself from the male stamen to female stigma. A tomato flower must vibrate at a specific frequency to release the pollen enclosed in the anthers. Through buzz pollination, a bumblebee will grab the tomato flower, pull it down vertically, fasten its jaws onto the staminal tube and vibrate its wing muscles producing a high-pitched buzz. At hundreds of times a second, the vibrations are so strong the bees would be knocked off the flowers if they didn’t hold on. The released pollen falls by gravity to the stigma (pollinating the flower), and the excess pollen clings to the bee’s fuzzy body. Thus bumblebees are important pollinators in forests, meadows and for crops such as cranberries, blueberries, raspberries, squash and melons.

The native sweat bee also pollinates tomato flowers but seems to do so by chewing open the anthers. Honeybees are unable to pollinate tomatoes altogether. They just don’t have that buzz pollination behavior. Since tomato flowers don’t produce nectar, a bee’s carbohydrate source, and honeybees aren’t able to collect its pollen, a bee’s protein source, you will rarely find a honeybee visiting a tomato plant.

Commercial growers have been using bumblebees to pollinate hothouse tomatoes since the late 1980s. Before then, workers pollinated tomato flowers with a vibrating tool. Experiments show fruit weight, grade and seed count are higher for bumblebee-pollinated tomato plants. Now, there are commercial suppliers of bumblebees. The common eastern bumblebee (Bombus impatiens) is an agricultural favorite because of its large colony size, typically reaching 200 to 400 workers at the peak of the season.

As our world becomes increasingly urbanized and North Americans become increasingly detached from the natural world and its creatures, I say, “Follow a bumblebee!” Follow a bumblebee for 10 minutes one afternoon. Follow her to your tomato flowers. Get lost in her flight and daily chores. No need for a bee leash of thread. Just follow the bumble and forget your own worries for a bit. Just bee.