What we hear can affect how we taste. • Illustration by Dorothy Acierno

“Music is the wine which inspires one to new generative processes, and I am Bacchus who presses out this glorious wine for mankind and makes them spiritually drunken.” 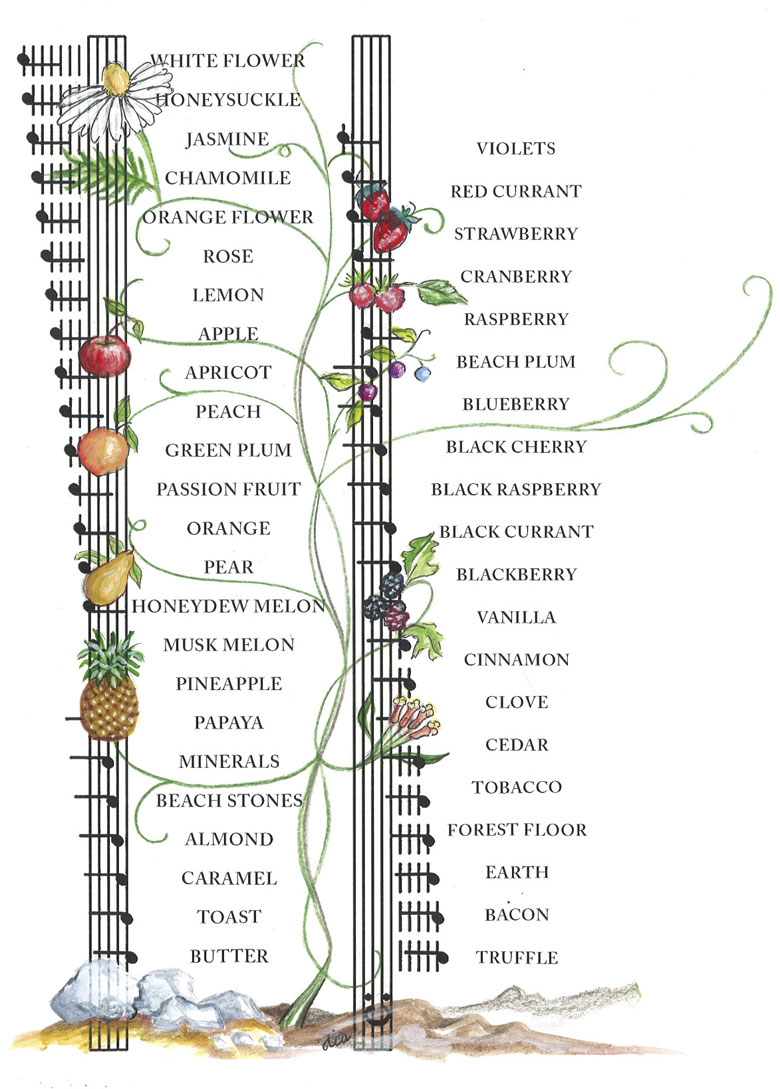 There’s no doubt wine and music work very well together. Sharing a glass of wine while listening to music over a romantic dinner can be one of life’s greatest pleasures. As a winemaker, music in the cellar soothes my mind, inspires creativity and energizes the workday. Wine and music are there to celebrate life’s most important moments and our greatest achievements. It’s the perfect pairing. But we now know the relationship between wine and music may go even deeper than we thought.

Perfumers understand the relationship between wine and music and use the analogy to describe fragrance. The British perfume maker G. W. Septimus Piesse suggested in 1862 an “octave of odor” could be used as a musical analogy to “compose” perfumes. Individual scent components are “notes.” “Top notes” dissipate quickly and “bass notes” dissipate slowly; chords are built of multiple notes. In less technical conversation, perfumers speak of harmony, balance and even rhythm. In the old days, the shelving unit that stored a perfumer’s bottles was referred to as the “organ” because of its visual similarity to a pipe organ.

The scientific connection between aroma and music was verified in 2004 by researchers at the Nathan S. Kline Institute for Psychiatric Research in Orangeburg, New York. They found our perception of sound, smell and taste can converge and affect us positively or negatively. Simply put, information received through the nose and the mouth can be altered by noise. They coined “smound” to describe the sense experience created by merging scents and sounds in the brain.

More recently, scientists at the Crossmodal Research Laboratory at the University of Oxford explored how all five senses interact. According to their research, there may be implicit associations between taste and pitch.

More recently, scientists at the Crossmodal Research Laboratory at the University of Oxford explored how all five senses interact. According to their research, there may be implicit associations between taste and pitch. They found that people seem to naturally associate certain aromas and flavors with musical sounds and that taste may be altered depending on the accompanying soundtrack. High-pitched sounds were associated with sweet and sour tasting foods while low-pitched notes were commonly paired with bitter and umami tastes.

It’s all part of the neurological phenomenon called “synesthesia”—stimulation of one sensory pathway leading to automatic, involuntary experiences in a second sensory pathway. The sensory equivalent to the old “Dem Bones” song, if you will. The bottom line is that our senses are not as separate as we used to believe; these studies show what we taste and smell can be heavily influenced by what we hear.

I use the connection of music to wine throughout my winemaking, especially when blending. After harvest, the wines in the cellar express many different characteristics, even within the same variety. The art of blending involves recognizing the musical notes in the wines to determine which will form harmonious chords and perhaps, ultimately, a beautiful symphony of flavor. Sometimes, there is enough of a song in just one variety to sound perfect; some wines may express harmony in a small ensemble while others deserve a part in a larger symphony.

The North Fork terroir is alive with an abundance of music; an orchestra of sound inherent in the land ranges from the bass notes of earth and cedar in our reds to the treble notes of citrus and flowers in our whites. Many of these aromas and flavors have been described before, but I thought it was time to develop our own musical scale.

Ladies and gentleman, for the first time ever, I present to you a Musical Scale of Long Island Terroir. Hope it smounds good.