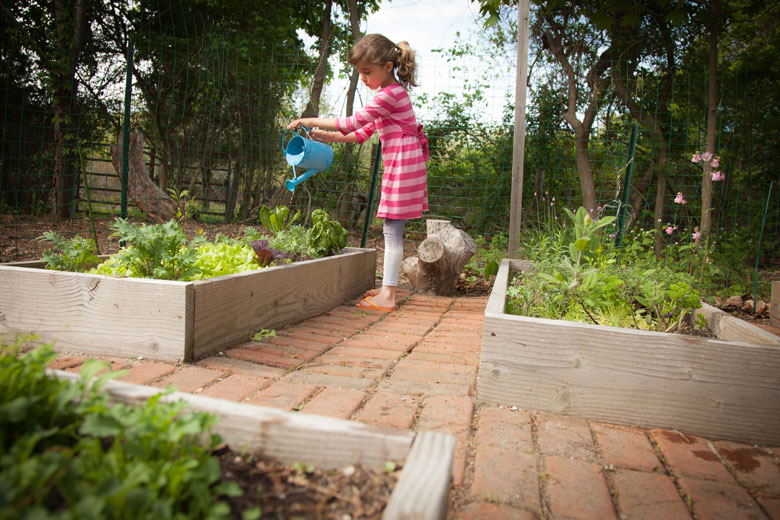 The author’s daughter, Beatrix Huberty, in the family garden.

The spring before last, I realized we had to move the vegetable patch. All of it. A flowering pear tree — once small and delicate — had grown large and leafy, sending most of the patch into shade. So, brick paths were dismantled and carted in a wheelbarrow across the yard by my son; raised beds were dug up, the soil saved; my daughter hauled compost batches by the beach pail to a new bin built by my husband; and I built raised beds while kneeling on the damp cold ground with my power drill. After much research, I decided we were going to go down in square footage and bed numbers, but up in yield by using narrower paths and a “lasagna” method of layering newspaper, compost, straw and chicken poop. Because, if we were going to do this all over again, I thought, we were also going to end our war with the weeds then and there.

Two years later, our edible garden is beautiful and thriving. The brick paths have been extended into a mini patio where my daughter likes to sit and sketch pictures of the plants and where the dog likes to lounge in the sun. Our yard in rocky, clay-infested North Haven is made up of native grasses, trees, cutting flowers, herbs and vegetables. It borders a 30-acre preserve, which means lovely views and horrible infestations of non-native invasive weeds (also ticks, deer, rabbits, moles and foxes). 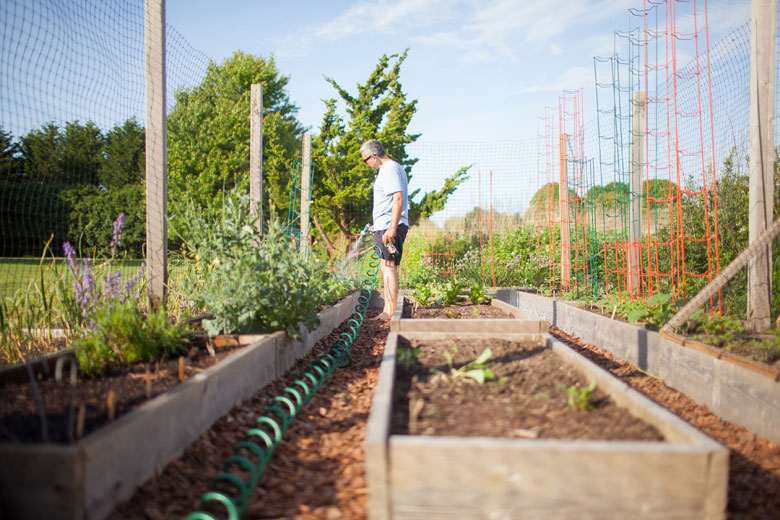 Philippe Cheng in his garden.

My two children help me care for and harvest our five beds, which integrate into the our landscape. In case you haven’t already guessed, it is not easy work. But the rewards are great. We can, from May to October, pluck at least 50 percent of what we need for meals directly out our back door and my kids are sufficiently proud of their work that they actually look forward to eating things they never would have otherwise tried.

Many East Enders keep edible gardens. Some garden hoping to lead a more sustainable life, for nutritional or cooking reasons, or because their parents may have kept a tomato plant when they were kids, or because they grew up in the city and never saw a tomato plant. Some of us, once we get started, are compelled to improve and expand until the whole process becomes an addiction, a wrestling with and giving in to nature.

We can, from May to October, pluck at least 50 percent of what we need for meals directly out our back door and my kids are sufficiently proud of their work that they actually look forward to eating things they never would have otherwise tried.

All over Europe, in coastal climates resembling ours, edible gardens have been an integral part of landscaping. Keeping a veggie patch is common in the British Isles and Ireland even among busy working people. During WWII and the years after, rations made edible plots a necessity, and many kept up the practice even after rationing was over. My sister, who lives in suburban Surrey in southeast England, is an avid gardener; she and most of her neighbors are always growing something in their narrow back gardens among the flowers, water features and well-pruned rosemary shrubs. In the United States at Monticello, Thomas Jefferson famously grew 250 varieties of vegetables, and during the Depression of the 1930s, city dwellers grew their own meals. But we late 20th- and early 21st-century Americans have been slow to return our yards to culinary use, until now.

One reason is the Slow Food movement, which emphasizes organic, local farm-to-table eating. An edible garden is, in its simplest form, small-scale farming, and this gives you control over what you grow and, thus, eat. But vegetables and herbs can also provide a surprising array of color and shape, and the aesthetic attributes of an edible garden may be taken as seriously as the bounty it yields. 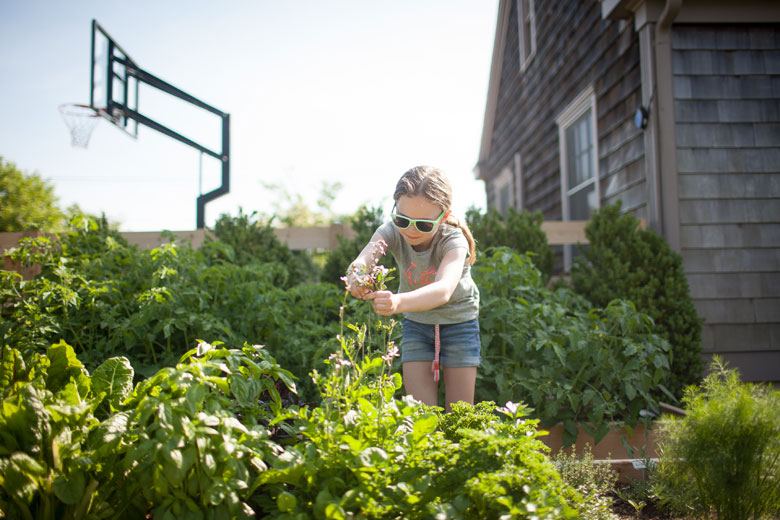 Isla Panton in a children’s garden.

Sam Panton, born in England, and his wife Kenna MacKay, born in Scotland, are no strangers to integrating edibles with aesthetics. They own TerraDesigns in Sag Harbor and its offshoot, Playful Gardens, which specializes in natural playscapes for families. Panton and MacKay are partial to using blackberry bushes for privacy screening. At one East Hampton family’s home, they planted a large hedgerow of the fruit-bearing bushes, and created a vegetable patch. The homeowners — who had never grown food before —became so enamored with the garden that, last summer, they made a pantry full of pickles.

Sam Panton and Kenna MacKay own TerraDesigns in Sag Harbor and its offshoot, Playful Gardens, which specializes in natural playscapes for families.

Victoria Cardaro, owner of Buttercup Design on Shelter Island, has also been asked by clients to install edible gardens. While clients in Shelter Island keep a small but bountiful garden, others in Shinnecock included a 20-fruit tree orchard and a 30-foot-long grape arbor. The matriarch of that family, says Cardaro, “is out in that garden everyday with her sisters, working it. She brings seeds back from Sicily and uses everything for cooking and feeding her large family.”

Panton finds the quirky mix of people interested in edible gardens on the East End unique to this area. “You have farming families that have been tilling the soil for generations, and they’re more than a little amused at the wealthy second home owners who are putting in vegetable beds purely for cocktail conversation, because it’s considered the ‘thing to do.’”

Perhaps the hardest sell, Panton says, is getting clients to understand permaculture, which creates systems that have the diversity, stability and resilience of natural ecosystems. This is often called companion planting: co-planting vegetables, flowers and herbs in a bed to avoid pests and diseases. With companion planting, it may be best to grow cucumbers, strawberries and cabbage together, even if that seems like a weird combination.

A portion of those who have turned to vegetable gardening may be influenced by the rise of edible school gardens on the East End. For anyone who has watched a child in the garden, there is something magical — almost mysterious — about how this process can turn even the pickiest of eaters into a lover of nutrient-rich dishes. Jon Snow with Arjun Achuthan runs the culinary arts and garden science program at Hayground School in Bridgehampton.

Getting kids into the garden, says Snow, “means that food is no longer a foreign object and becomes seen in an entirely new context. The students establish a relationship with those plants.” He adds, “Children understand they are essentially stakeholders in a risky business.” And what child doesn’t like a challenge — a dare, if you will — with great rewards?

Philippe Cheng and Bastienne Schmidt keep a 10- by 30-foot edible garden in Bridgehampton. Cheng says they were enormously influenced by the gardens at Hayground, where their younger son attends school (their oldest graduated and now attends the Bridgehampton School, where there is also an edible garden and greenhouse). A photographer (Cheng’s wife is also a photographer and artist), he finds that balancing the aesthetic with the practical is one of the more challenging elements of gardening.

“The maintenance with weeding is enormous,” he says. His garden is now accented with defined paths of stone under which are hidden layers of landscape fabric, still pleasing to the eye and efficient to maintain.

Thinking outside the box (or raised bed) can integrate gardens into a beautiful landscape plan. Terra Design uses chic planter corners to join up planks for beds in modern brushed aluminum or bright colors, while Buttercup Design has used a modern approach to a Victorian walled garden to create tranquil edible spaces that invite lingering.

To start your own edible garden, Alys Fowler’s Edible Gardens: How to Have Your Garden and Eat it Too, is a great resource, and a visit to Quail Hill Farms in Amagansett or Marder’s Nursery in Bridgehampton is inspiring in the extreme.  The website edible-landscape-design.com, run by veteran gardener Patricia Loofbourrow, has helpful tabs that include garden layouts, recipes and guides for climate zones (we are Zone 7, in southern New York).

I spent most of this spring reading and anxiously awaiting a warm weekend to implement a list of improvements to our edible garden. A trip to LongHouse Reserve inspired my daughter to draw plans for a sunken rose and herb terrace (a big idea that might take a few years to implement), and we have begun building a tree house that sits behind and looks out onto the vegetable patch. Soon, it will just be a short trip down the ladder to gather a delicious summer lunch of salad and basil-mint iced tea.