Let’s Get the Sea Bean Rolling

If you’ve ever had a food craving at the beach and visited the concession stand only to return to your beach chair hungry, then now is your chance to make a difference.

Instead of horrendous hot dogs or hockey puck hamburgers, how does hormone- and antibiotic-free meats, the freshest fish possible and local, organic produce strike you?

What’s a sea bean, you ask? “Down south and in the Caribbean, a sea bean is a drifting seed, one from a palm or mangrove that is washed out to sea and sometimes made into jewelry,” says Christman.

In Bonac, however, a sea bean, or salicornia, is a wild, native edible that grows in the marshlands and tastes like a salty green bean, packed with B-complex vitamins. “It’s available pretty much all summer if you know where to look!” he adds.

I know where to look but I’m not saying anything. The skinny succulents, which resemble fingers with knuckles, are especially adept at filtering carbon dioxide from the air.

Or how about Lake Montauk clam chowder poured over hand-cut Balsam Farms potatoes?

But who can resist foraged sea bean sauce on shredded lettuce and carrots from Pantigo Farm Company nestled into a Montauk Pearls oyster po-boy? Or how about Lake Montauk clam chowder poured over hand-cut Balsam Farms potatoes?

In his Kickstarter video, Christman says his earliest memories are making dough animals at Dockside Pizzeria on Flamingo Road in Montauk where his parents worked. Later, his mother became a professional chef and his father a commercial fisherman.

So a food truck on Ditch Plain made perfect sense. Christman had put in a bid for the popular surfing beach and “won” the coveted spot last month. Alas, the Sea Bean mobile was a tad too long for town regulations and Ditch was unfortunately ditched. 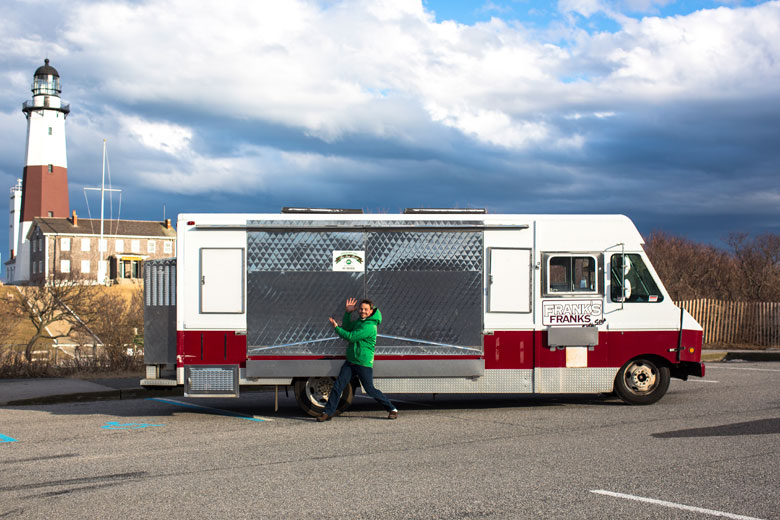 No doubt, the Sea Bean will have a bigger parking space on another East Hampton Town beach locked down by July 4.

“The food truck, at the moment, is in South Jersey getting refit for Suffolk County Board of Health,” says Christman, “We expect it back in three weeks and then it will be inspected by the board of health.” In the meantime, Christman is working as a private chef, catering and securing “late night options” for his operation.

With one week to go, the Sea Bean Kickstarter campaign has raised almost $11,000 of its $15,000 goal. Foodies unite. Let no man, woman or child go back to their beach chair empty handed. MTKChowder Fries, here we come.