Congrats to North Fork Table & Inn on Its 10th Season

I doesn’t seem that long ago, when our editor in chief Brian Halweil was out on the Main Road in Southold taking pictures as North Fork Table & Inn was setting to open for its first season on the North Fork in 2006. It was just one year after the inaugural issue of Edible East End in 2005, a few years after Long Island Wine Country celebrated its 3oth year and on the cusp of the full blown food revolution that has engulfed the entire East End with speciality farmers and great new restaurants. Soon we’d see livestock, an explosion of chickens, even speedier fish delivery and the slow progress of snails destined for beds of garlic and butter. Slow Food East End had just started and their school gardens were just a glint in the eyes of the founders (which also included Halweil).

The restaurant, with its bold name chefs, Gerry Hayden and Claudia Fleming, took off and easily convinced skeptics who didn’t believe anyone would make the drive to Southold for fine dining, where restaurants papered with nautical charts and ship wheels were long favorites.

Edible ran a Back of the House story about nofoti, as the gang likes to call it, in summer 2013, two years after Hayden’s 2011 diagnosis with ALS. At that time, the chef was making his way around his kitchen in a motorized wheelchair with a type of pace maker to aid his breathing. These days oxygen is delivered by a mask, but Hayden is still near the stove where he “continues to lead, teach, and create in the kitchen,” says mixologist Mike Mraz, who runs the front of the house with wife, Mary; they too are partners. “He has invited fellow chefs from New York City, Julien Shapiro and Scott Ryan, to collaborate with him and make this tenth season the best yet!” 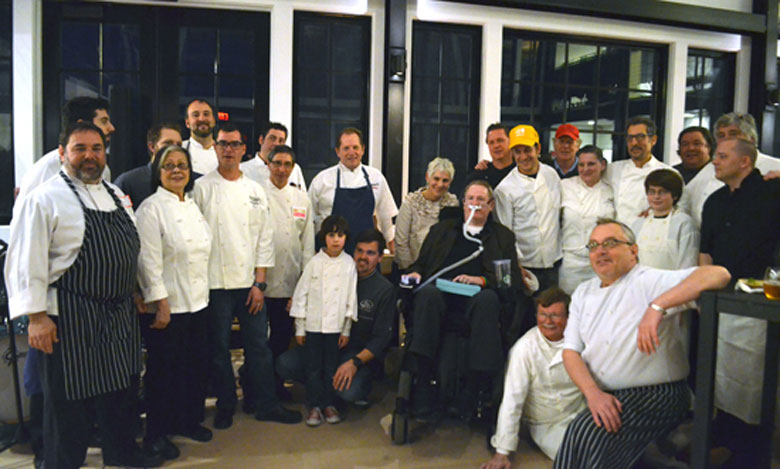 Gerry Hayden surrounded by local chefs at a fundraiser to aid his life with ALS.

The lot behind the restaurant is almost as exciting. The North Fork Food Truck, which started in 2011, is still going strong and has started selling prepared foods — Hayden’s smoked salmon and cured meats and Fleming’s pastries — along with the superb hot dogs and a sturdy entry into the cult of the Long Island breakfast sandwich, which the trucks serves for breakfast on Saturdays and Sunday; expect to find pastured eggs, home fries, bacon or house made sausage. Leave room for scones. The Food Truck went mobile and is now for hire for off-site catering. Box Lunches are available for groups of 20 or more.

As all know, the restaurant is up for sale; the partners have taken Hayden’s health into account and decided the operation would not be the same once he is unable to give his share. 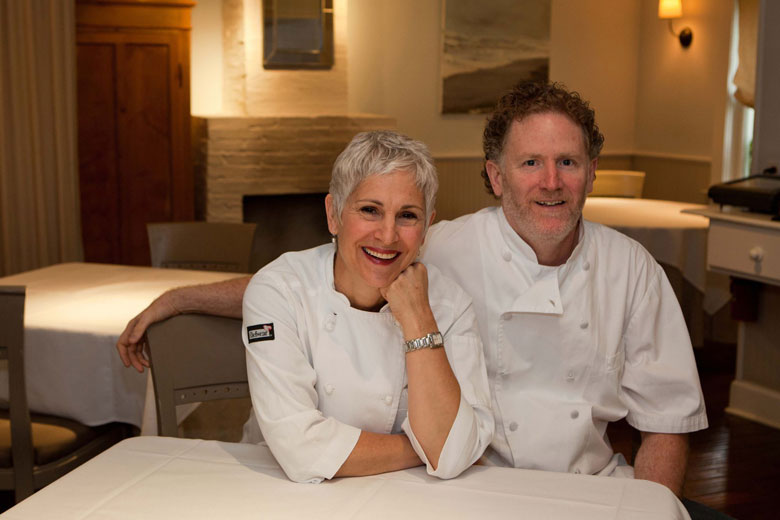 It’s been a great run for the kind of restaurant that, in the end, is so North Fork. It’s a group of friends with an idea, a willingness to work hard, a fascination with buying as much local product as they can, which guarantees no gaps in the knowledge of ingredients provenance, and a desire to feed us, with enthusiasm and anticipation, the best food they know how to make.

Here’s to a great season!