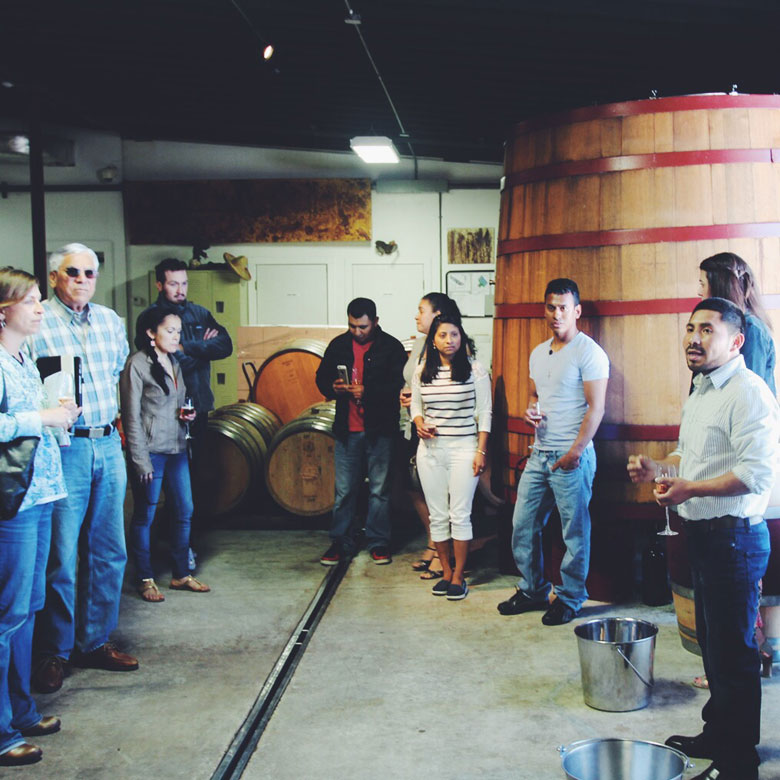 First lesson learned. It might be called ¡Vino Latino!,but we are definitely not on Latino time as a certain Edible East End Latina contributor discovered when she and her dad arrived at 1:10p.m. for a 1 p.m. wine tour start. Seferino Cotzojay, assistant winemaker at Bedell Cellars, was starting the first official Spanish-language winery tour and barrel tasting on the North Fork, and he and everyone else was starting on time.

But never mind; we took our bubbly pink to go and followed the rest of the 15 or so attendees out of the tasting room for an hour and a half of learning about Long Island wine in Spanish.

“Les doy una muy calurosa bienvenida,” said Cotzojay, raising his glass as we paused on the covered deck on our way to the vineyard. “I give you a very warm welcome to Bedell.”

The tour began in the breezy sunshine of the vineyard among the chardonnay with Cotzojay explaining the history and terroir of Long Island wines, the stages and seasons of the vines, the work of caring for them and the varieties Bedell grows.

“Brindamos porque estamos haciendo historia (We toast because we are making history),” he said. “This is the first time we do this in Spanish and it is just the beginning of many new things.”

Cotzojay, who hails from Guatemala, started at Bedell 10 years ago with the harvest. He fell in love with viticulture and worked his way up to becoming assistant winemaker. Now his goal is to share his passion with other Spanish speakers, many of whom he sees working in the wine industry, but not enjoying the product itself. And indeed this group included fellow Guatemalans who have become curious about wine because they live in this region.  It also included some Bedell fans who jumped onto the tour, but may not have understood a word.

As the tour progressed into the tank and barrel rooms, the questions about fermentation and aging came thick and fast and the answers did too. The barrel tasting included wines like malbec and albariño that are familiar to Spanish speakers, while the wine-pairing advice was directed at the foods Cotzojay’s audience loves.

“The cabernet franc is perfect with Guatemalan enchiladas,” he said. “And tamales, they go fantastic with a chardonnay based sparkling wine.” 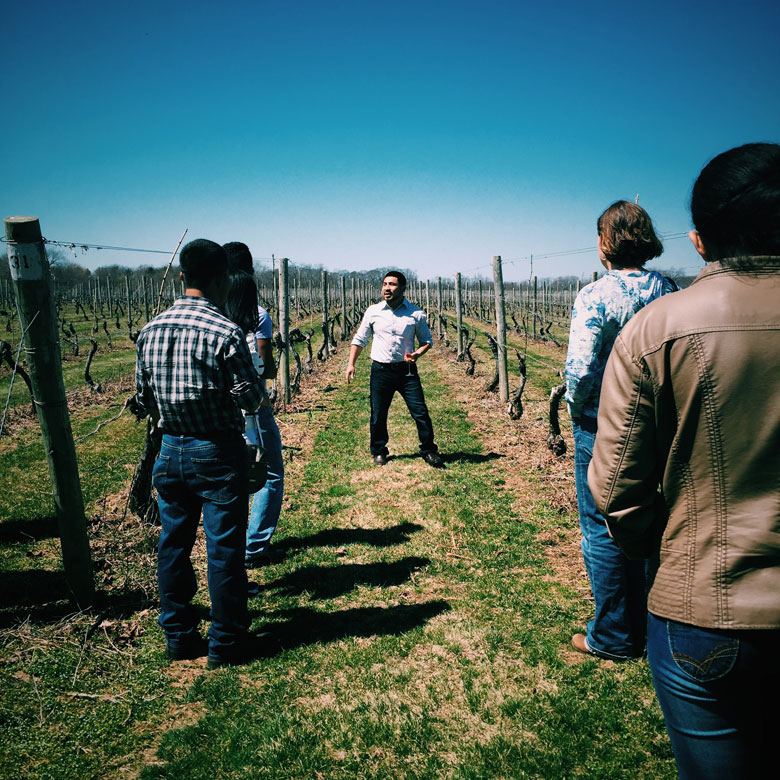 The attendees were clearly curious and having fun. Gladys Javier and Selvin Escalante said they knew a little about wine, but mostly imports. “I drink Italian wine,” said Escalante, a local carpenter. “I haven’t drunk anything from this region, but now that I have tried it, I am going to continue.”

Victor Pirir, who lives in Riverhead, didn’t need any converting. “My interest today was because I had never head of a wine lecture in Spanish before,” he said. “I like Long Island wines. I like what is local. And I like that here they do natural fermentation.”

The tour ended with fruit and cheese and a taste of some finished product: the 2013 Malbec and Syrah. Seferino Cotzojay toasted this first step in making Long Island wine bilingual.

“Brindamos porque estamos haciendo historia (We toast because we are making history),” he said. “This is the first time we do this in Spanish and it is just the beginning of many new things.”

I’ll be looking forward to Bedell’s next Spanish-language event. And next time I know not to be late!