‘I Wanna Rye-It!’ Which Means You Can Try It! A New Ale at Our April 30 Carousal

Come taste a beer that wouldn’t have happened without all the creative, fun, hard-working, and slightly deranged people you find at the Brooklyn Brewery.

A bunch of hunks! Quitting time at the Greenport boatyards so the room just filled up with boatbuilders in Carrharts. They like beer too. @brooklynbrewery @edibleeastend @lindsaymorrisphoto

You never know who is going to show up at our Quarterly Carousal when we gather with local food vendors and Brooklyn Brewery to celebrate the latest issue of the magazine and a new beer.

On April 30 we will be meeting at the hip and swank Bell & Anchor in Noyac to taste “I Wanna Rye-It,” No. 7 in a series of brews created by a member of the brewery’s team; this time it’s Jimmy Valm, who has made an amber rye ale at 7.5 percent abv: a malty brew with strong rye notes, a slight hop kick, and a lingering finish.

Join us for the fun. $5 tickets are available here. Let us know you’re coming!

And it wouldn’t have happened without all the creative, fun, hard-working, and slightly deranged people you find at the Brooklyn Brewery. 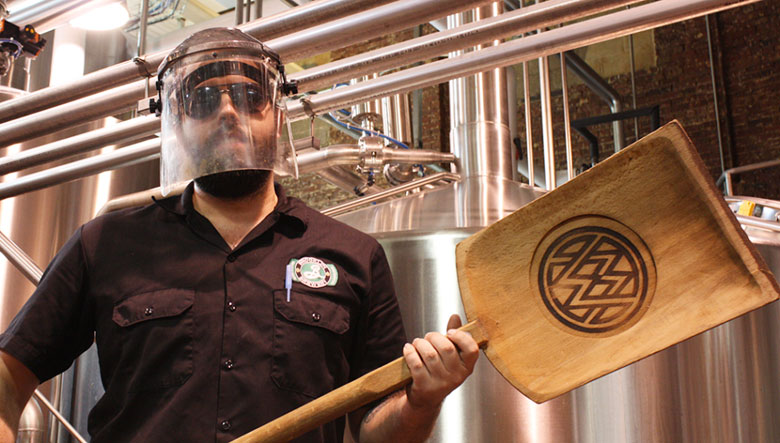 Here’s the deets on Jimmy:

Favorite Place to Drink: Back patio with the BBQ going and plenty of friends

The Brewer’s Notes:
Fourteen years ago when I began home-brewing I never thought I’d work for the Brooklyn Brewery. But after leaving Seattle, getting a brewing degree in Scotland and working for Heineken in England making Foster’s on an industrial scale, I got the chance of a lifetime. Almost a year later, not only am I brewing some of the best beers around, I’ve been given the chance to design my own to add to that collection. I’ve always loved rye ales, but never took the time to make one of my own; it turned out neither has the Brooklyn Brewery. Killing two birds with one stone never felt so right. And it wouldn’t have happened without all the creative, fun, hard working and slightly deranged people you find at the Brooklyn Brewery. I hope you all enjoy I Wanna Rye It! as much as I enjoyed brewing it.