What Are Teenagers Up To These Days?

Does it have anything to do with raw milk? One proud grandma shares.

Anne Howard, membership chair, newsletter editor and communications co-chair at Slow Food East End, had family visit for Christmas. And she just had to pass on this story.

“Is there a place to buy raw milk on the North Fork,” asked my grandson.  This was a pretty strange question from a teenage boy.

Noah, a 16-year-old student at Newton South High School in Newton, Mass., was thinking ahead to the speech he was required to write for his English class.  All sophomores at his school must make a six-minute speech in front of their peers.  Each class would select its top speaker to go on to the semi-finals. The final six would compete in March.

After arriving in Cutchogue, Noah called Ty Llwyd Farm in Northville — where they sell raw milk — to ask if they would be open on Christmas Eve. “Of course we will be here,” said the voice on the phone. “We’re farmers. Come by any time.”

So we head out that afternoon to visit Ty Llwyd, which translates to brown house from the Welsh. Noah was able to interview farmer/owner Liz Wines; her husband, David, was working in the barn. He also met the cows in their new barn and talked with son Chris, who is the dairy farmer in the family.  Of course, he bought a bottle of raw milk.  End of Christmas story.

Fast forward to March. Noah gives his speech on raw milk, “Everything I Want to Drink Is Illegal,” and his classmates select him to go to the semi-finals. He survives the semis and moves to the finals. The final competition was in front of about 500 students and teachers, when he stood in the middle of the gymnasium floor without notes or podium. Pretty scary, right?  Most of the audience has never heard of raw milk, much less that it is illegal in nine states. Most teenagers are interested in things illegal, so they loved it.

Noah’s speech was a home run!  The five other speakers talked about the hot topics of the day, but raw milk won first place. Now when people see him going down the hall, they say, “There goes the raw milk guy.”

And to think it all started on the North Fork on Christmas Eve!

A transcript of Noah’s speech is below. 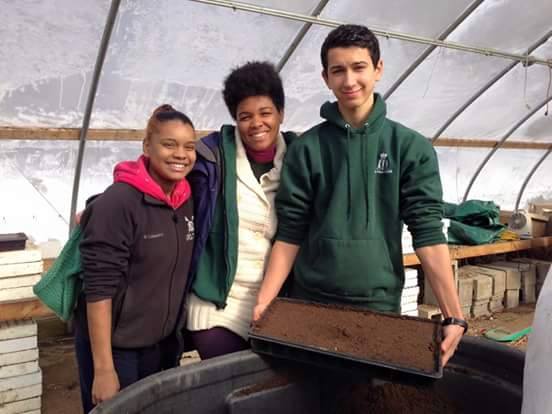 Everything I Want to Drink Is Illegal by Noah Kopf, Newton South High School, Newton, Mass.

If I were to head up to my favorite dairy producer in say, Vermont, pick up a couple of gallons of fresh milk, straight from the udder, return home and drink it with some friends, I would become a felon under U.S. federal law. My crime? Illegal transportation over state boundaries of raw milk, milk that has not been pasteurized to kill any bacteria living in it.

Pasteurization was first used in the early 1900s, when typhoid fever and tuberculosis were sweeping the nation. Many outbreaks of these diseases were started by bacteria that grew in unrefrigerated milk, something that pasteurization could easily take care of — it seemed like a no-brainer, and indeed, it worked; pasteurization was adopted as a standard procedure, cutting illnesses from the hundreds of thousands to virtually zero — in a few decades, raw milk was banned outright.

So why am I arguing that this dangerous and deadly substance should be re-introduced into our diet? Two reasons: Because of modern widespread use of the refrigerator, raw milk is not dangerous anymore.

And second: Scientists have recently learned much about the human biome, the crucial bacteria inside us that make up around 90 percent of all the cells in our body. In raw milk, they have discovered thousands of strains of “good” bacteria that break down food, regulate toxins and neurochemicals and destroy harmful bacteria that cause disease. Raw milk is the best source of the best bacteria that exist; strains like lactobacillus are found by the trillion in a gallon of raw milk. But in pasteurized milk, you won’t find a single one.

And the importance of beneficial bacteria isn’t just limited to the immune and digestive systems. Some of the latest research has uncovered connections between gut bacteria and the brain. One study found that when a group of mice consumed only processed, sterile foods, they quickly became unhealthy and depressed. The quantity of anxiety-inducing chemicals in their brains skyrocketed, but when they returned to a healthy diet with plenty of good gut bacteria, their problems vanished entirely.

They still happen all right. They just aren’t caused by raw milk.

According to the Centers for Disease Control, there are around 56,000 hospitalizations from foodborne illness per year. On average, raw milk causes 15 of them. Illnesses caused by cantaloupes killed 34 people in 2012.

How many people did raw milk kill in 2012? None. In fact, in the last 30 years, raw milk has been attributed to a grand total of two deaths.

Because of raw milk’s long-standing infamy as a “dirty food,” raw milk farmers have to follow incredibly strict guidelines to ensure that their milk is safe, and they work. On raw milk farms, the percentage of contaminated milk is virtually zero; it has to be, or else people would be getting sick left and right. But on FDA-approved factory farms, 7 percent of all milk contains listeria, a potentially harmful pathogen. So while it is a federal crime to sell milk with its natural, beneficial bacteria intact, it is perfectly all right to sell infected milk — after all, once the contaminated milk has been pasteurized, it is completely safe — as long as you don’t mind drinking dead bacteria as well.

The people who produce raw milk constantly face an onslaught of outdated FDA regulations, persecution by agribusiness giants and a misinformed public that sees them as crunchy, dirty hippies rather than responsible farmers who produce a product that is safe, nutritious and incredibly healthy.

In the early 1900s, nobody was worried about E. coli or salmonella; they were nothing compared to the massive outbreaks of typhoid fever and tuberculosis. But a century of only drinking pasteurized milk has weakened us. With every generation, our immune systems are becoming less and less adequate to deal with even minor pathogens, so we try to make our food safer. We try to kill every single bacteria that passes our lips, and it works for a time, but then we become even more frail and have to take even more extreme measures like irradiation and ultra-pasteurization. This vicious cycle needs to be brought to a halt, and it can start with the legalization of raw milk.

As of today, raw milk is banned entirely in nine states. The other 41 states have a wide range of policies regarding raw milk. In Georgia, it can only be sold as pet food! But throughout the nation, the people who produce raw milk constantly face an onslaught of outdated FDA regulations, persecution by agribusiness giants and a misinformed public that sees them as crunchy, dirty hippies rather than responsible farmers who produce a product that is safe, nutritious and incredibly healthy. Midwestern farms should not be shut down for months while bureaucrats review their dairy licenses. Amish farmers in Pennsylvania should not be harassed for selling their products in Ohio, and raw milk farmers everywhere should not have to worry about armed raids by the FDA. We need to have the right to choose what we eat, and it starts with raw milk.