A Greenport man risks it all to save four lives in the middle of a storm. 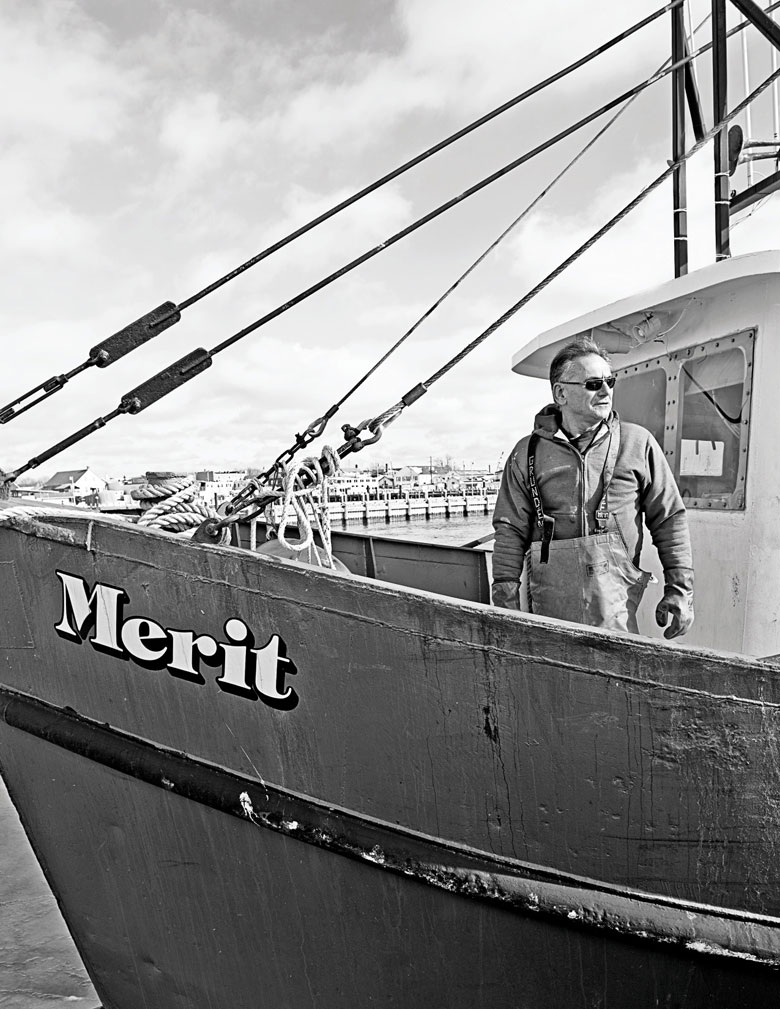 Five hundred yards from my house, Captain Sid Smith ties up his 100-foot ocean dragger, the Merit, on Greenport’s Railroad Dock. Even though he scoffed at my efforts to farm oysters here when I began 13 years ago, I have always admired Sid, and men like him, who defy the open seas to catch the fish we all crave. Like most people, I have a fear of the ocean and its tempests, the very things that Sid confronts every day of his life.

Last November, upon returning from my weekly delivery of oysters to the city, we tucked into our bedroom and I noted the Merit was not in port. Since winds were forecast to be merely 30 knots, I did not consider that unusual. Somewhere after midnight, my wife and I awoke to the sounds of a nor’easter thudding into our seawall. It was blowing at least 50. Unbeknownst to me at the time, two boats were about to cross paths in the Rhode Island Sound: a tug named the Karen Jean towing a barge of construction material up to Boston and the Merit, ducking into Port Judith to repair some broken chain.

The Merit’s mate, Gary Detrick, who used to work on my oyster farm, told me a few days later that Sid’s rescue was the most daring feat of seamanship he had ever witnessed in a lifetime at sea.

“I heard the Mayday,” Sid told me the next week over coffee when he was back in Greenport, “and realized we were the closest boat to them. When I told my crew we were turning around to get them, they were not exactly pleased. It was 50 knots gusting to 60; seas 10 to 15 feet.

“I told them to put all the ladders and lines we had on the starboard side and not do anything until I told them.”

Sid maneuvered the Merit downwind of the Karen Jean, which by now was on the bottom, held by a 775-foot towline, acting as an anchor to the barge. He sketched the positions of the sunken tug, the barge, the Merit and the life raft in my notebook. They had a spotlight on the raft, and he held the Merit motionless in the raging nor’easter, bow to the wind, waiting for the raft to drift to him.

When the frantic crew of the Karen Jean was 100 feet away, Sid performed the most selfless and heroic feat of seamanship I had ever heard of—he turned the Merit broadside to the wind, so the helpless men in their raft would have a larger target to collide into and grab on for dear life. Captain Sid Smith risked his life, his crew’s lives and his only asset in the world, his boat the Merit, to save the lives of four total strangers.

Gary Detrick snared the raft with his boat hook. As soon as he tied it fast, three terrified men raced into the Merit’s cabin without turning around or coming back. The fourth man, the captain of the Karen Jean, was in the water, hanging on to the ropes of the life raft: he was too weak from hypothermia to pull himself up the ladder.

Captain Sid Smith risked his life, his crew’s lives and his only asset in the world, his boat the Merit, to save the lives of four total strangers.

Still broadside to a bellowing nor’easter, the Merit pitching dangerously in the swells, Captain Sid Smith tucked one arm under the Merit’s rail and leaned overboard, grabbing the half-dead man’s jacket. Cajoling and lying to him, he got the other captain to put one foot on the ladder then two. As the Merit slid down a wave, Gary grabbed Sid’s waist and Sid grabbed the man’s shoulders with both hands. Using the force of the rising swell, he tossed the man onboard, and they all stumbled into the warmth of the cabin, where Sid manned the wheel and headed into Port Judith.

“I dumped out all my clothes and gave them to the shivering men,” Sid told me. He tied up at his slip in Port Judith, to be greeted by the dockmaster and the DEC, “the fish cops.” Sid returned to his wheelhouse to quickly fill in his catch book to satisfy the fish detectives. “If I had a boat full of fluke they would have come sooner,” he said. Finally, the Coast Guard arrived, filling the cabin with 14 people. They told the crew of the Karen Jean to go up to Providence and take a drug test, but they waited inside the Merit from 6 until 11 p.m. when the crew’s families arrived.

Sid was glowing when he recounted his tale—either from the act of saving four men’s lives or from being hailed as a hero at every turn. A noble heart beat inside him. “I’d hope somebody would come after me if I was in the water,” he said.

At the fish market, I sometimes balk at the price of cod or fluke. Then I feel ashamed when I realize fishermen like Sid, a truly dying breed, struggle with regulations, a rapidly dwindling catch and an ever-menacing ocean to bring food to my plate.