The 2014 vintage is a smash, and the first big taste you’re going to get of it is from the #2014rosé. Expect to find most at Brooklyn Uncorked on May 28. 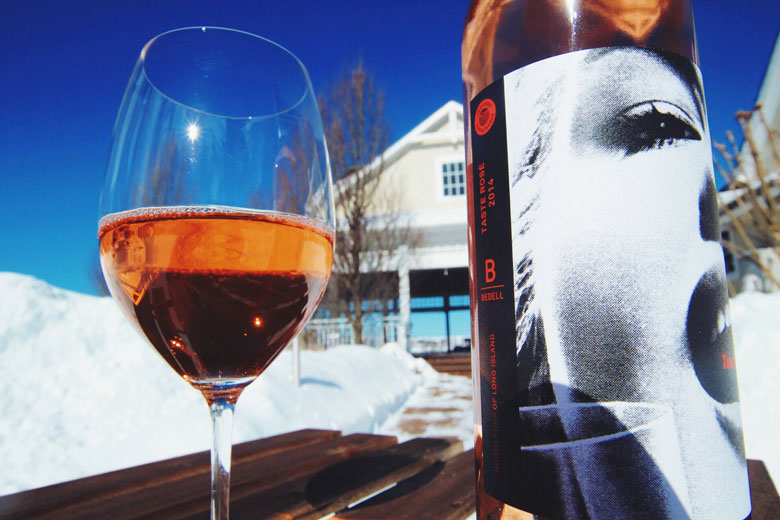 It’s not quite rosé weather yet, but it doesn’t hurt to start thinking about what you will be drinking when the deck furniture is out of storage and you’ve finally slid your feet into a pair of shoes without putting on socks first.

We’re here to help! Edible has written about the rosés of Long Island Wine Country for years. In fact, 10 years ago, when the magazine published its inaugural issue, there was still a feeling that American wine drinkers needed some convincing to get them to drink rosé. There was that continent-spanning hangover from the success of white zinfandel — which, if you think about it, kinda did to rosé what Miles did to merlot in Sideways — and the generation-spanning hangover that pink was for girls.

Thank god we’ve gotten over that! By 2010, writer Karen Ulrich took a tour and wrote about nothing but rosé for us in her story “Everything’s Coming up Rosés.” Here’s a quote: “Before heading back to the city, we stop at Wölffer Estate Vineyards, where they have been making rosé since 1992. “1992 was the worst growing season in Long Island history, so to make rosé out of our very young vines made a lot of sense,” says winemaker Roman Roth. However, he adds, “In the ’90s, wineries copied white zinfandels. We used to make the only completely dry rosé with lower alcohol, around 11.5 percent.” This early recognition of rosé’s potential has paid off. Wölffer has fans such as Eric Ripert from Le Bernardin, and Asiate at the Mandarin Hotel carries the wine on its list. A couple of years ago, the Wall Street Journal praised Wölffer’s rosé as one of the best three rosés in the country. In 2005, Roman made the first 200 magnums of Noblesse Oblige, a sparking rosé, and as Roth states — speaking of the wines of Long Island, “the rest is history.”

Recently someone asked me if Long Island rosé producers held back stock to create demand and if running out of rosé was a marketing maneuver. The answer is no

In 1992, they had to make rosé. In 2014 everyone was overjoyed to. Last year’s growing season was great for everything, but for rosé especially because the yields were so high. I’ve gotten a few reasons for this, and they’re all different, but let’s just say there will be a lot of Long Island rosé this year made from high quality, ripe and clean grapes. Recently someone asked me if Long Island rosé producers held back stock to create demand and if running out of rosé was a marketing maneuver. The answer is no. For wineries that bottle using only fruit from Long Island they have grown or bought — and you can tell this if the label indicates the wine’s American Viticultural Area; for Long Island, it must read “Long Island,” “The Hamptons” or “North Fork of Long Island” — there is a limited amount of fruit to go in rosé, and when it’s gone, there ain’t gonna be no more until the next harvest. The wineries out here would happily make all the rosé they could sell. They have to settle for selling all the rosé they have. Still not a bad position to be in.

I’ve asked our winemakers to tell us about what they’re digging about 2014 rosé, and I’m expecting everyone to share their summer of rosé with us using #2014rose. It’s going to be a good season.

First up, because he got back to me first, Richard Olsen-Harbich (who also writes the Spontaneous Fermentations column for us) fills us in on what to expect. Next time, we’ll hear from Mark Tobin from Mattebella.

“I’d say 2014 is a particularly great vintage for rosé because cooler temps and dry conditions during the growing season allowed our fruit to come in with bright crisp acidity, a vibrant pink color and perfectly balanced alcohol levels under 12 percent. Our 2014 finished at 11.5 percent alcohol, which you won’t find often in domestic rosés. Ours reflects the North Fork so well with aromas and flavors of strawberries, raspberries and plums that are awash in thirst quenching acidity and saline/sea breeze mineral undertones. These are grapes born to be rosé; we tend to them from the start of the season to be at their best for this wine, then hand pick them and whole cluster press for just a hint of color. All is done in stainless steel and fermented ( like every other wine we make ) with ambient yeast.

Rosé is the perfect summer wine as its refreshing and can be paired with a lot of summertime cuisine: things like salads, roasted vegetables, seafood and grilled meats all pair up well. Something about rosé always makes it taste so good outdoors, and it can also be enjoyed on its own. It’s extremely versatile as well as delicious. It is the quintessential summer wine.”