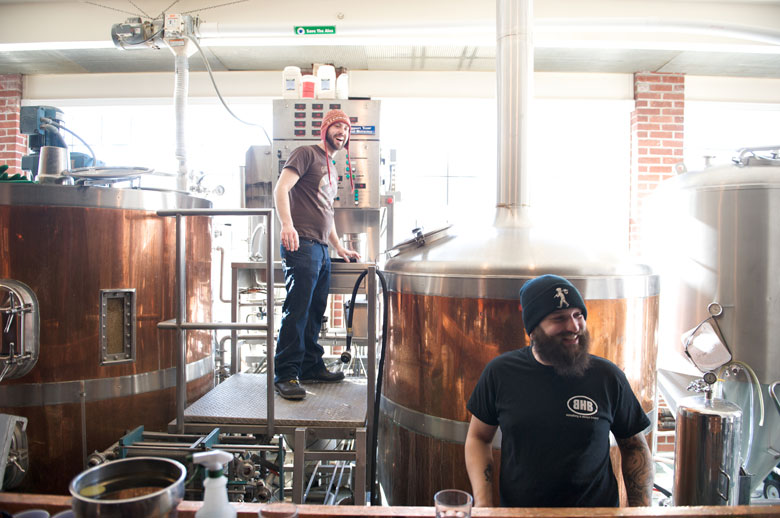 Arthur Zimmerman and Paul Komsic drew from “west coast inspiration” for their latest BrickHouse Brewery beer. Direwolf, a double IPA, was brewed for the first time in 2014 and is back for 2015. The beer is a play on Beowulf, their standard IPA. “It’s a bigger, badder version,” says Komsic.

One influence was Lagunitas, a California brewery known for aggressive hoppy beers. They utilize a dry hopping technique, which allows flavors to be bigger and bolder, so that’s exactly what the BrickHouse did for Direwolf. “Dry hopping is the one thing most brewers do not do exactly alike,” says Zimmerman. He and Komsic focused on using Simcoe and Summer hops to “enhance the juiciness and add a three dimensional sort of thing.”

Zimmerman boldly says, “This is our stab at a big Double IPA like Pliny the Elder.” He’s referring to Pliny the Elder made by Russian River Brewing Company in California and touted as one of the best beers in the country.

To add a Long Island touch, Direwolf uses local wildflower honey. Dale Williams, owner of South Bay Apiaries, brings the honey right to the brewery. It’s raw, unfiltered and smells “like a nice little meadow near the beach,” says Zimmerman. “The lighter flavors in the IPA bounce well off of the honey.”

IPAs should be consumed quickly before the hop flavor and aroma fade. “The advantage of being a brewpub is you can do a fresh great IPA. The beer has never had a chance to get warm,” says Zimmerman.

Direwolf will be on tap at BrickHouse Brewery beginning February 27.

Look for a Beer Loves Company column about BrickHouse in the upcoming Spring Issue of Edible Long Island/Edible East End.