Last year, we got powerful and passionate responses to our vote for your Local Heroes on the East End. For the past few years, we have given our readers the opportunity to honor the women and men who make our food and drinks locally through commitment and hard work. Celebrating these people is what Edible does every day. We exist to tell the story of farmers, fishers, wine growers, winemakers, brewers, artisanal food producers and the people like researchers and movement starters that make life for the producers easier and more fruitful.

Last year we nominated five names/organizations in five categories: chef/restaurant; food/beverage artisan; nonprofit; farm/farmers; food shop. This year, we wanted to focus a category on one of the most distinguishing aspects of the East End, its wine industry. This will replace the food shop category because, given our limited downtowns, changes there do not happen too frequently and shops can be included in the artisan category. We also wanted to expand the nonprofit category to add food advocate. Sometimes those earning a living help progress, too. The winners were announced with this post. Winners cannot be nominated for the next three years. For nominees, we looked for entrants that had the most impact on the foodways of the East End. This means we did not always come up with five names in each category. If you think we left someone out, say so in the comments. A convincing argument can be convincing. Give it a go.

Also, last year ballot stuffing by passionate supporters was evident. A new voting system will prevent that, so spreading the word is necessary! We love getting feedback from readers; we think of you in everything we do. Winners will be announced the same day, February 22, as the Academy Awards. You guys are our academy. Then we all can get dressed up and give these hard workers the prize they deserve: recognition by the people they cook, grow, provide and work for. Voting ends February 18. 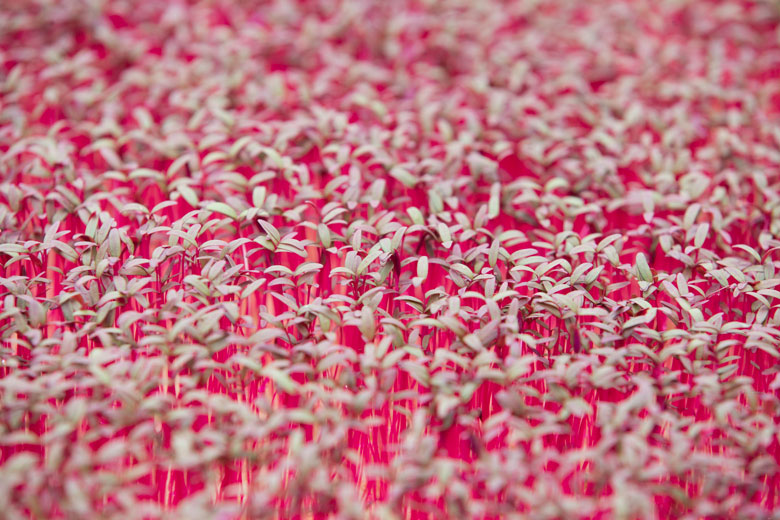 Steph Gaylor of Invincible Summer Farm. With the Stephanie Tomato Seed of the East End, Gaylor has galvanized the farming community to save their seeds to create the best varieties that will produce on their own farms and to work toward food security. She’s started her own seed company and organized the first large scale seed swap for home growers on February 7.

Scott Chaskey of Quail Hill Farm. The East End may just be Seed Central. Chaskey’s book Seedtime, came out last year. Reading it takes you into history, politics and philosophy. Chaskey’s tenure at Quail Hill, a nonprofit, has had him at the head of one of the region’s first CSAs and as the organizer of the popular Outstanding in the Field dinners.

Koppert Cress. This Netherlands-based microgreen grower selected Cutchogue on the North Fork for its U.S. outlet because it’s the “sunniest place in New York.” It also has affordably agriculture-zoned land and a quick less-than-two-hour commute into a major metropolitan area. Look at your menus tristate area dwellers: Koppert Cress is owning the microgreen market.

Sang Lee Farms. In a Chinatown in the tristate area? Then your menu is likely populated by the produce grown on this third-generation family farm that specializes in Asian vegetables. The entire farm is certified organic. The family is also dedicated to teaching the next generation about the importance of the land. Last summer they held a young farmers day camp. 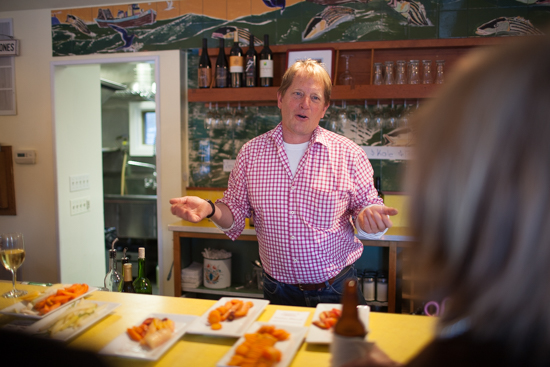 Petulant Wino. Chef Tom Schaudel keeps hitting it out of the park with a new restaurant every year or two. His latest is the Aquebogue-based Petulant Wino that is helmed by his daughter Courtney and her ever-vigilant eye. The Monday night $18 burger special cannot be beat.

1943 Pizza Kitchen/Brix + Rye. Long-time bartender and mobile pizza entrepreneur Matt Michel stuck a stake in the ground to mark the establishment of an empire with the opening of these two businesses. He was able to take advantage of a small business grant of $250,000 that is being used just the way it’s supposed to: adding vibrancy to the restaurant scene in Greenport.

Joe Realmuto. Having been in front of an oven for nearly 20 years at Nick & Toni’s in East Hampton, Realmuto has seen a lot of changes. However, he’s usually been one of the earliest adopters. Fresh and local has populated his prep station for just as long. He planted a substantial garden before anyone else and helped locate a farmers market in the restaurant’s parking lot.

Colin Ambrose. Ambrose can take Realmuto’s longevity and laugh. He’s been in charge of kitchens in his own restaurants since the ’90s. First at Estia in Amagansett, then Estia’s Little Kitchen in Sag Harbor, and in 2014 he opened a place in Darien, Connecticut. His kitchen garden not only provides for the menu, it also inspires events like last fall’s Carrotpalooza.

The Long Island Wine Council. Promoting a wine region in a globe of wine regions is a big job, and directing congenitally independent winemakers/growers is like herding cats; believe it. This past year, the council was awarded grants to promote the region internationally, partnered with major travel corporations and was able to help write legislation, signed by Gov. Cuomo, that made artisanal beverage production in New York State much less tangled in red tape.

Food lawyer Jason Foscolo. Speaking of red tape, starting a food business without a bank of lawyers like the ones on hand at Unilever is rife with unknowns that can trip you up. Foscolo homed in on this field in 2011, and now nearly every local artisanal producer has taken advantage of his expertise.

Moriches Bay Project. From the crash in scallop production and the lobster die-off in the ’80s, the state of Long Island’s bays has been a constant struggle with red and brown tides and the push of leaching nitrogen from the near hegemony of cesspools in our sewerless region. Nonprofits to save the bays have responded with volunteers focusing on the Great South Bay and Shinnecock Bay. The neglected Moriches Bay, which covers almost 9,500 acres, withstood the effluent produced by Long Island duck industry and once supported the livelihood of generations of baymen, now has a group dedicated to seeding the water with enough spat to let a million mollusks filter it back to health.

Long Island Sustainable Winegrowing. Started in 2012, this organization has combined science and passion to create concrete standards that can quantifiably make winegrowing more sustainable for the workers, the land and the water. It’s picking up new members all the time. 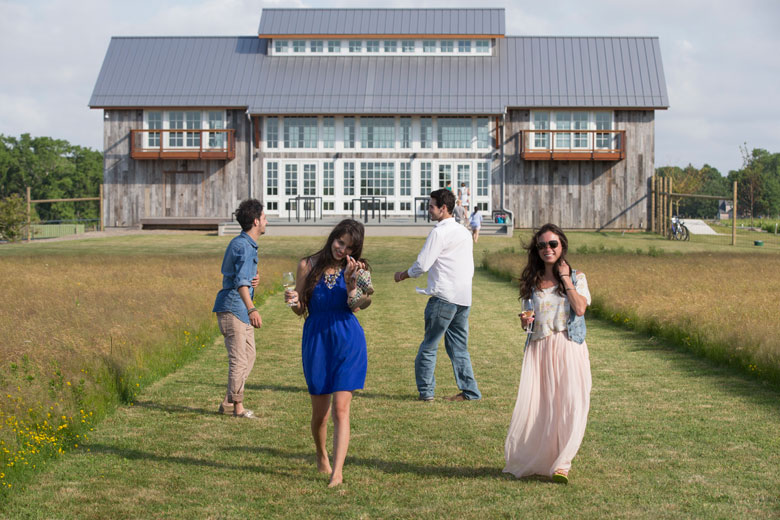 Richard Olsen-Harbich. Full disclosure: Olsen-Harbich started writing a column for Edible East End last year, but that can’t deny us the opportunity to recognize his contribution to the region. He was one of the founders of Long Island Sustainable Winegrowing; he wrote the AVAs (American Viticultural Areas) that define our region and is an all-in creator of local wine with a two-feet-on-the-ground position that supports his sky’s-the-limit belief in Long Island wine. He’s been making wine out here since the ’80s, and he’s here to stay.

Southold Farm+Cellar. Regan Meador left his advertising job to become a farmer and winemaker. He entered the region with the splash of modern marketing and the slash of razor-sharp opinions about what Long Island is capable of producing. He pooh-poohed chardonnay and merlot, but he also respected his elders while bringing fresh juice to the industry.

Alice Wise and Libby Tarleton. These two women are behind many of the decisions winemakers and winegrowers make as they decide what to plant, how to care for the plants and when to pick. They run the grape research and extension program at Cornell Cooperative Extension of Suffolk County. Wise has been on the job since 1991. Tarleton joined in 2002. Everyone is indebted to them.

Kontokosta Winery. The Kontokosta Winery in Greenport, which opened in June 2103, is the first LEED-certified winery on the East End. It’s reclaimed-wood, xeriscape community garden on the premises is truly the way forward for wineries and tasting rooms. 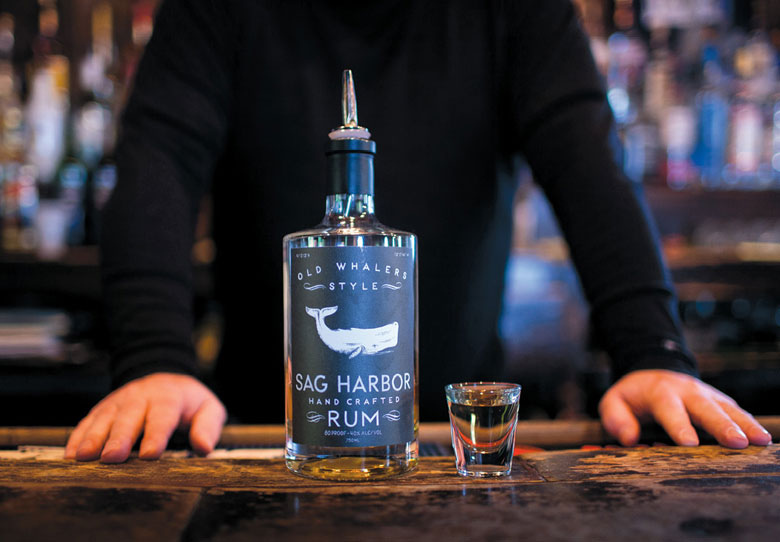 Greenport Harbor Brewing Company. These guys are on a roll. This summer they opened a brand new brewery/tasting room/soon-to-be restaurant in a building in Peconic that had been empty too long. It’s a great addition to the wine trail, and owners Rich Vandenburgh and John Liegey are committed to using as much local produce in their brews as possible, including growing their own malting barley.

Hamptons Brine. Fermentation is in, and Nadia Ernestus of Hamptons Brine is the bright crest of the wave of brine sweeping the East End. Local vegetables are getting the treatment allowing local eating to extend to all seasons.

Woodside Cider. Enter the small tasting room where you can fill a growler with hard cider and there Bob Gammon will be leaning on the tap, looking like he’s been there for days. He has. It’s because the cider is delicious. And his and his brother’s success with the business has inspired other producers to get in the cider game. Thus our apple orchards stay in business.

Sag Harbor Rum. Thank God for Long Island Spirits, the Baiting Hollow distillery that has allowed artisanal spirits to join local wine, beer and cider coalescing around Long Island cuisine. The guys at Sag Harbor Rum, picked up on the East End’s history of sailors and the rum trade and ended up making something that truly speaks to the local palate.