Q & A with Dean Babiar: New Winemaker at Jamesport Vineyards

At just 30 years old, Dean Babiar — the brand-new winemaker of Jamesport Vineyards — is also the youngest on the East End. Babiar, a resident of Greenport, recently sat down at Aldo’s for his first interview. 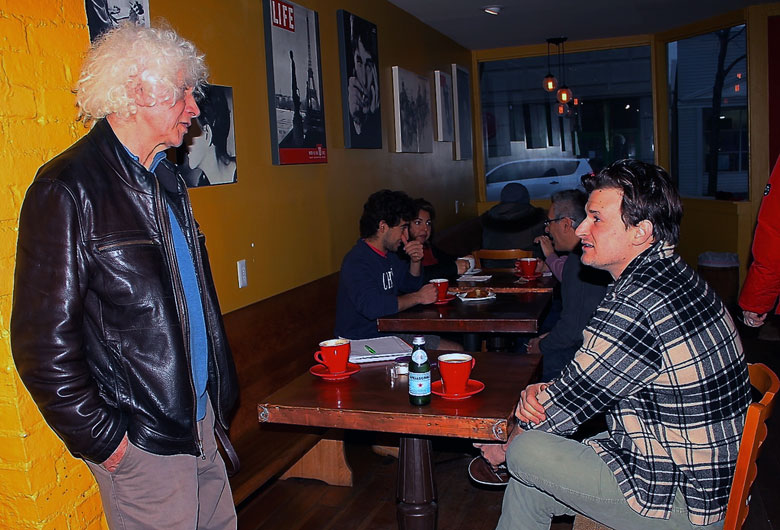 Why did you come to Long Island?
I wanted to come over. I’m two hours away from where I grew up, but I feel like I’m home. It was a seven or eight hour plane ride to get here from California and when I was in Italy, it’s was also seven or eight hours, so for me, working over there was just as far from home as living in California.

I always had the intention of coming back to work with the cab franc here, because I was trying to focus on that from working on the right bank in Bordeaux. Bordeaux is split by a river and the left bank is dominant in cabernet sauvignon and the right bank is all merlot and cabernet franc.

How did you get in contact with Ron Goerler to become Jamesport Vineyards new winemaker?
I just called him up when I was in Italy. I knew of Jamesport Vineyards reputation and of Ron being a good wine grower. It was random luck because it was a good opportunity for both of us at the time.

It seems like you’ve been riding the wine wave around the world without much of a rest!
Yeah sort of – this will be my third vintage of 2014.

What was the first wine you made where you felt like, “This is mine.”
By the time Ron hired me [in November], the 2014 vintage was close to being over, but I made an effort because I knew the petit verdot was still on the vine and I wanted to get to work. I started the day the petit verdot came in, so I got to see that all the way through fermentation.
I just put it into barrels this week, so we’ll see where it ends up!

Tell me about your first winemaking experience.
I received my degree in agricultural economics from the University of Maryland in 2009 and was hired by Pahlmeyer in Napa Valley for their 2010 and 2011 vintages. In between those vintages, I went to New Zealand for their 2011 vintage.

Where did you go after working in New Zealand?
After that, I worked at one of the southernmost wine estates in South Africa called Hamilton Russell and was there between January and April of 2012. Then I was hanging out in Italy for a bit, and I was going to return to California, but I got an opportunity to work in Bordeaux — Pomerol and Saint-Émillion — for an influential consulting winemaker, Michel Rolland, at his family estate, Château Le Bon Pasteur.

What is the most important thing you learned from Michel Rolland?
The reason I really wanted to work for him is because he does something called micro-vinification, so we were fermenting red wine in small little barrels. There we had 80 separate natural ferments going on at once.

Why does Rolland favor micro-vinification?
It’s because then he has all these different options to pick from to really figure out the best blend for his wines. It’s a cool little thing, and I don’t think a lot of people do it in the world.

How do you make wine using micro-vinification?
You have to physically — with a chisel and a hammer — open up the barrel heads, crush the grapes and put them directly into the barrel. You close the barrel so they’re sealed and the technique for the fermentation is to just roll the barrels — you can roll them on the ground — so there’s no pumps involved.

So using this method, you can basically make 100 percent handmade wine?
Exactly. In my head, I knew the concept in theory, but I really wanted to go ahead and learn how to do it. It was awesome doing that because after that vintage, I was able to go work for his winery in Argentina. I got the contact from when I was working in South Africa with a bunch of French people, which was easy because I have an Italian passport, so I didn’t need any visas.

How do you have an Italian passport?
My grandfather came over [to the U.S. from Italy] and started a sausage factory in New Jersey, where I grew up. When he died there were little parcels of land leftover in Italy, so however it worked we had to become citizens to claim it. My mom is a citizen and she still lives over there, so it was a lot easier.

If they’re standard-sized barrels, what’s so ‘micro’ about the process?
Well, with typical wine fermentations you’re putting all of the grapes in huge tanks for one fermentation, but in micro-vinification each fermentation is only 225 litres.

Do you prefer that?
Yeah, I think it’s beautiful. I like everything where you don’t have to use a pump. You can control things pretty well and it really makes for a nice, dense wine.

Is micro-vinification something you’ve considered doing at Jamesport Vineyards?
It was definitely an option, yeah, but we’re talking about doing a lot of different things in the next couple years. For example, we buy so many French oak barrels, and I like more old school kinds of ways of making wine. So little things, like using those those gigantic barrels you see in Italy; those barrels last for 30 years.