From the Garage to the Brewhouse; New Collaboration, Imperial Force, Released Today 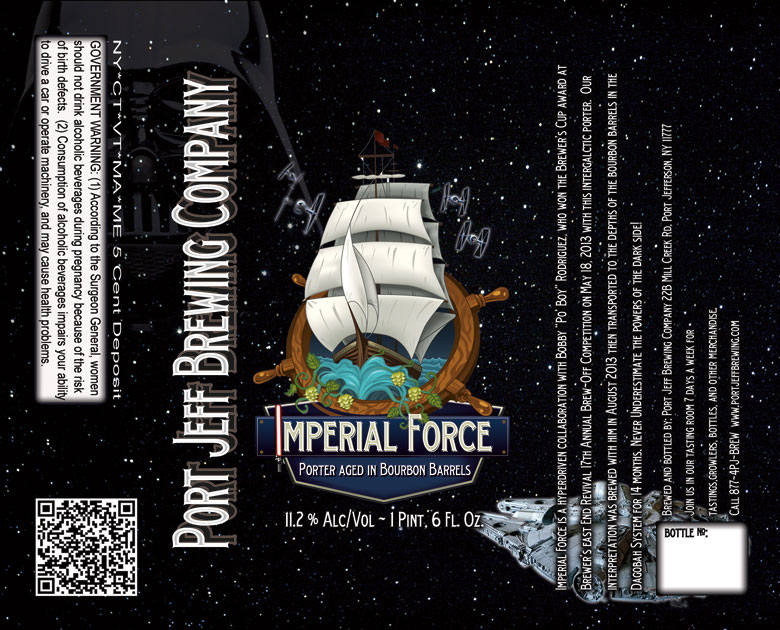 Rain fell at the 2013 Brewers East End Revival Brew-Off award ceremony. The day began sunny and with chaotic activity around the small American Legion Hall in Saint James. As modest as the space and event were, lots of planning had been devoted to assuring the event was well organized and run to Beer Judge Certification Program standards. In addition, food, drink, fun and prizes were secured for volunteers who would be sacrificing one of their Saturdays in May by helping to set up, pour beer and organize results. Beer Loves Company’s very own Kevin ended up as the “competition coordinator;”  by proxy Alicia was on the job too. We saw homebrewers and attendees discuss recipes and cheer each other on when the awards were handed out to the crafters of fine ales, lagers, ciders and meads.

The most coveted prize is the Brewer’s Cup, because the winning beer will be brewed professionally by a local brewery. The winner gets to see his or her recipe scaled, produced and released for sale and distribution. That homebrewer can then go into a local bar, bevy or the brewery itself and order their Brewer’s Cup beer on tap — a dream for most who take up the pastime.

The lucky winning homebrewer can go into a local bar, bevy or the brewery itself and order their Brewer’s Cup beer on tap — a dream for most who take up the pastime.

Three years prior to BLC taking the reins as competition coordinator, Brooklyn native Bobby Rodriguez visited the Great American Beer Festival in Colorado along with several other Long Island beer (and malt) enthusiasts. G.A.B.F. is the premiere beer event in the United States. Hundreds of breweries make the pilgrimage to pour samples for the thousands of thirsty attendees and compete. One of the more talked about G.A.B.F. medals is the Pro-Am, which is awarded, by popular vote, to a homebrewer whose winning recipe will get commercially brewed. B.E.E.R.’s Brewer’s Cup is our local answer.

After tasting the finished product, Bobby Rodriguez decided it wasn’t ready, so his dark inky brew sat a year in bourbon barrels and longer in kegs before it was released.

At G.A.B.F. one beer caught Rodriguez’s attention: Avery Brewing Company’s Meph Addict. As if a bourbon barrel aged Imperial Porter was not enough to tweak the minds of beer geeks, the extremely limited released Meph Addict’s recipe includes coffee. This ale put the gears in Rodriguez’s mind in motion; he went home inspired.  After tasting his finished product, however, he decided it wasn’t ready. His dark inky brew sat a year in bourbon barrels and longer in kegs for a total of three years before it was released and entered in the 17th Annual Brew-Off.  “As this is a strong sipping beer, it can be aged for several years,” says Rodriguez.

We were lucky enough to sample this Herculean homebrew prior to and at the event. It’s a complex and rich beer made to be savored and sipped. Quite impressive stuff for a homebrewer to achieve.

Port Jeff Brewing Company was just over a year old when we approached owner Mike Philbrick to brew the 2013 Brewer’s Cup winner. He is easy to get along with and does not to shy away from a challenge. Philbrick began as a homebrewer and member of B.E.E.R. He then attended the Siebel Institute of Technology in Chicago before starting PJBC. We enjoy the company’s porter, an ale we believe is the flagship, and were ecstatic when he accepted our offer. He also decided to compete in the Brew-Off’s chili competition.

The Brewer’s Cup is one of the final events, because the best beer brewed by a card carrying B.E.E.R member from each category is put forth for sampling by the brewery representative before a decision is made. Judging all of these categories takes an entire morning and afternoon with sessions often occurring the night before as well. Inside the cozy American Legion hall Mike Philbrick sat and tasted several beers before narrowing his choices down to two: a Flanders Red or a barrel aged Imperial Porter.

Rain had not begun to fall until the awards ceremony was about to start. The competitors, judges and staff along with their family and friends were forced to huddle together under a small pop-up tent village. With each passing category and award handed out, anticipation built. Under one tent Philbrick chatted with current members of his former club while Rodriguez was making the rounds giving notes to those who let him sample their beer and heading back and forth to pick up ribbons he received for placing in several categories. It seemed as the drops were falling hardest when the winner was announced, and Rodriguez proudly walked forward to accept his prize from Port Jeff Brewing Company’s brewmaster. The two were now on a journey begun years ago at GABF.

If you have met Bobby Rodriguez you know one thing about him: he is opinionated. As such there was a back and forth discussion about how his homebrew recipe would be scaled up into what would eventually become known as Imperial Force. Both Rodriguez, Philbrick and then head brewer Jeff Noakes were aiming to be as faithful to the original recipe as possible. “We changed a couple things based on what I know about the system plus a few things that he thought should be tweaked a bit too,” says Philbrick. Once the hops, malts and yeast were selected, they needed to find a slice of time to produce it. As the organizers of the competition and beer drinkers, we were eager for the brew day to come and were thrilled to be invited.

We arrived bright and early but not before Noakes had his grist (ground grain) ready to go into the mash tun (kettle where water is added to the grain for sugar extraction). Rodriguez arrived later and dove right in. A lot of preparation goes into making a beer, but the actual brewing process involves intense action followed by lulls of waiting.  It leaves ample time to chat while standing among imposing equipment surrounded by the aroma of steeping grain.

A brew based on something like Meph Addict is audacious. The bold scope of this beer meant the mash tun was maxed out with grain; after the wort was pumped in to the boil kettle, Rodriguez had quite a time shoveling all of it out into garbage bags for disposal.

A brew based on something like Meph Addict is audacious. The bold scope of this beer meant the mash tun was maxed out with grain; after the wort (sugary water which is fermented into beer) was pumped in to the boil kettle, Rodriguez had quite a time shoveling all of it out into garbage bags for disposal.  At the same time the mash tun was being emptied, the wort came to a boil. Hops were added to the kettle and each brewer took turns along the way reading the gravity of the beer with a refractometer. Everything chugged along as planned. After the boil, the wort was cooled and transferred to a fermentation tank where yeast was added. Rodriguez noted, “It showed me how similar brewing at home is to a larger commercial brewery.” This led to the creation of his recently licensed Poboy Brewing Company.

The burly brew was moved while still fermenting from the stainless steel tank in which it was born to four 53 gallon Heaven Hill whiskey barrels.

In the time between the hands-on professional brew day and Rodriguez’s opening Poboy, the beer was given a name: Imperial Force; it reflects not only its strength, but also the effort behind bringing it to reality. Oh, and of course there is a nod to Star Wars thrown in for good measure. While christened, the beer was not yet ready to release. In a small brewery fermentation space comes at a premium and Imperial Force was forced to march to the next stage in its lifecycle. The burly brew was moved while still fermenting from the stainless steel tank in which it was born to four 53 gallon Heaven Hill whiskey barrels. These barrels were “second run” which means that previously aside from being used to age bourbon they also housed beer, in this case Port Jeff Brewing Company Porter.

A portion of the Imperial Force batch was pulled for a cameo appearance in a “virgin” or non-barrel aged form at PJBC’s second anniversary party. This iteration was finished with some help from champagne yeast and forced carbonation. Rodriguez was happy with the way the beer was progressing,  but agreed with Philbrick that time would only help. Following this brief moment in the sun, all things Imperial Force went silent. Safely the rest of the Force was tucked away, slumbering and getting to know its new whiskey infused surroundings just waiting for the right time to reemerge.

Finally, in July 2014, there was a disturbance in the Force. Philbrick, like any other head chef, tastes his creation along the way. “The first three or four times we tried it I wasn’t impressed,” he says. Again it was left alone to mingle with the oak and whiskey. In May a taste was pulled; head brewer Matt Gundrum and Philbrick agreed: This behemoth still was in its infancy.

By July the page had turned, and the beer was delivering on the homebrew version’s promise. The difference was staggering according to Philbrick. Imperial Force was ready, but it was the wrong season to start selling it. To Philbrick, Imperial Porter is not a beer to grab when headed for a boat or the beach. This decision allowed the brew to develop more.

Eventually the pair decided to move the beer from its oaken home and to carbonate and blend for eventual bottling. We had the chance to stop in to the brewery one day for a tasting of several barrel aged beers, incluging Imperial Force. We tasted it and felt the full impact of all the thought and hard that made it. Notes of toasted oak, vanilla, roasted grain and warming bourbon moved around in our mouths.

The Force was finally strong within this Imperial Porter; it has been bottled and just over 500 bottles will be available exclusively at Port Jefferson Brewing Company with some on draft for sampling (no growler fills).

“I hope people realize at the time that I made the Imperial Force I was still a fairly new home brewer,” says Rodriguez. “It was quite difficult but obviously not impossible to make such a complex beer at home,” which he sees as an inspiration to brash homebrewing cowboys out there. Imperial Force was made by PJBC in conjunction Rodriguez before he was a professional, so Philbrick will not make it again. ” It’s Bobby’s beer and hopefully he will,” says Philbrick.

“What I just might do is make a very small batch of about one barrel and store it easily at the location and forget about for two years just like I did at home,” replied Rodriguez.  We think that’s a great idea.

“The beer geek in me says buy two,” says Philbrick. Craft beer fans will want to sample one fresh, and open the other a year or two later.

we plan to buy several bottles and suggest you do the same. And let us know what you think.