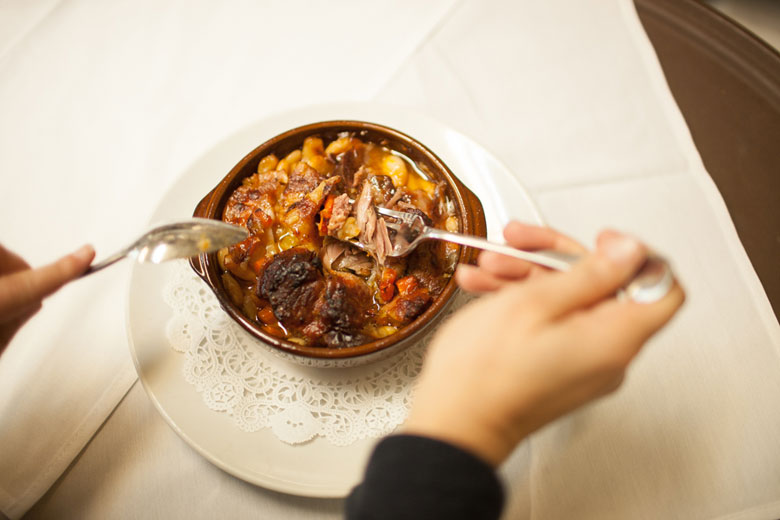 The finished cassoulet, fresh from the oven.

“Now that’s cooking!” exclaims Chef Christian Mir, a springy and trim 50-year-old as he slams the oven shut on his cassoulet, a rustic bean and meat casserole, releasing a cloud of caramelized energy.

I pinch myself. I have recently come back from what could be described as a cassoulet quest in the South of France, where I peeked into steaming earthenware bowls, studied the melting point of different beans and learned what pig skin brings to the stew, but we’re nowhere near the Languedoc region.

Mir is co-owner and executive chef of the Stone Creek Inn in East Quogue, and his late fall menu, filled with sweet potato and butternut squash speaks Americana as loudly as the 1910 white clapboard building, the pumpkins and the flag. He hails, however, from Toulouse, the “capital” of France’s southwest where he cooked for several years until destiny came knocking. “I wanted something different, a new scene,” he says.

Thanks to a friend who was living in the United States, Mir, 27, landed perhaps the most “different” gig he could have found: the kitchen at Tavern on the Green, the behemoth landmark restaurant in Central Park that sometimes served as many as 2,000 brunches per day.

Mir stayed two years, learning everything he could about American cuisine, but it’s fair to say that his most important takeaway came in the form of a gorgeous Italian-American cook named Elaine di Giacomo. Even before they got married, the couple searched, without success, for a New York City restaurant to call their own. 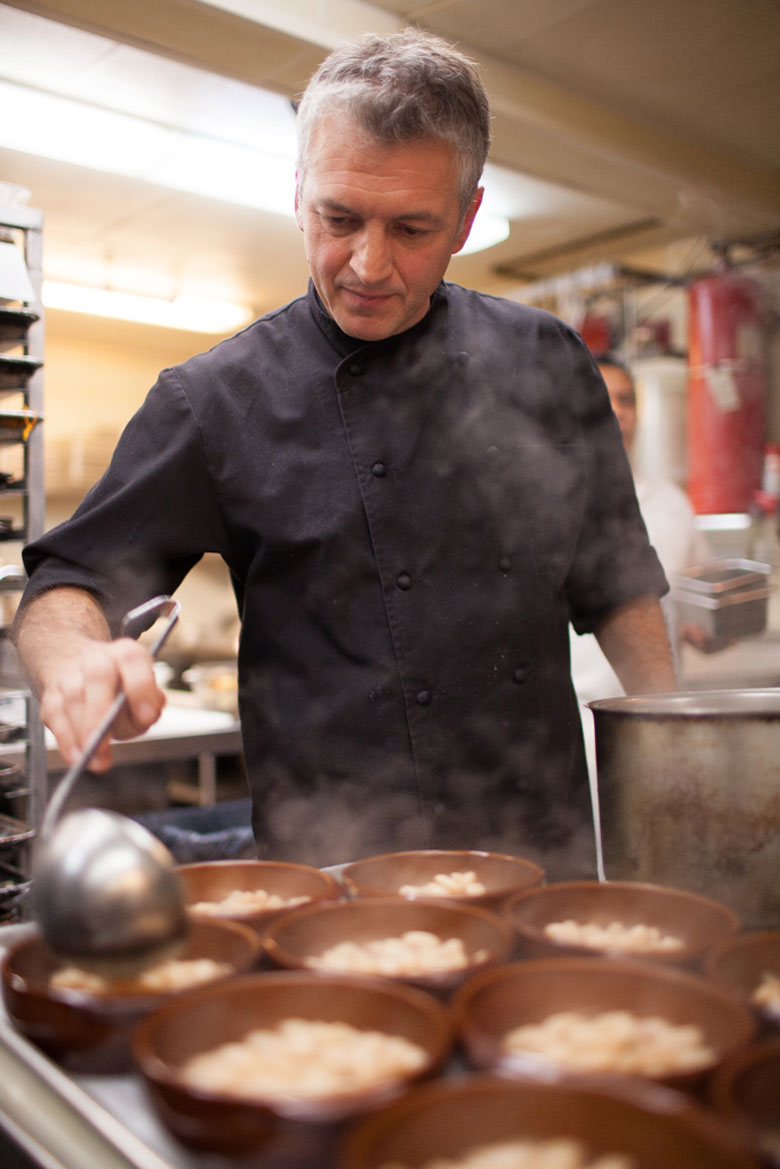 One weekend, on a jaunt to Westhampton, they passed the old abandoned shell of The Ambassador Inn. They had found their match. After a complete renovation, the Stone Creek Inn opened in May 1996.

“We started with a tiny menu because it was just the two of us,” says Mir. But it didn’t take long for his Southern French roots to creep up. “I had seen cassoulet on menus in the city and thought to myself, ‘why not?’” Staring into space, the chef turns nostalgic. “My parents owned a grocery store so they worked non-stop. But on Sunday, my father or his mother, Grand-Mère Simone who lived on a farm, cooked cassoulet for lunch. What a feast!”

Indeed, cassoulet is a feast. When the bowl appears on the table, often preceded by its nutty aroma, nostrils flare and diners sit straighter, ready to dig into the convivial dish.

Legend places the birth of cassoulet during the Hundred Years’ War (1337-1453). Outside the besieged French town of Castelnaudary in the heart of the Occitan region — now the Languedoc — the English were preparing their final assault, but inside the walls, the town’s provost called for a banquet to hearten the population before battle. “Bring whatever’s left!” He must have commanded.

There are now a dozen ceramic bowls on the counter, waiting their turn to be filled and sent on their way to stardom via a slow, warm oven.

White beans and chunks of meat — pork, lamb, goose and sausages —were thrown into the pot and cooked together. Following the meal, the legend goes, cheered by the cassoulet they had just invented, the French rushed the English assailants, driving them back all the way to the English Channel.

Tales and myths about cassoulet abound, but no one has sung the virtues of the dish as well as Carcassonne-native Prosper Montagné, the chef and author of the first Larousse Gastronomique, the culinary encyclopedia. In 1929, he declared, “The cassoulet is the god of the Occitan cuisine. A god with a clear Trinity: the Father, the cassoulet from Castelnaudary; the Son, the one from Carcassonne; and the Holy Spirit, the Toulouse recipe.” 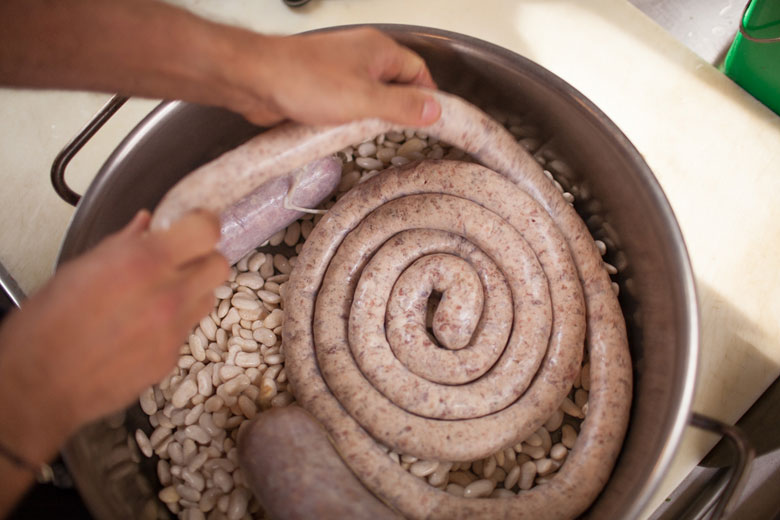 In East Quogue, we’re in Toulouse territory of course! Starting with the traditional French tarbais beans. “Expensive but crucial,” says Mir. By the time we start cooking, they have been soaking for 24 hours. With a contraption straight out of Fifty Shades of Grey, we push pork meat into the thinnest casing to make delicious saucisses de Toulouse. Chunks of pork shoulder sizzle in the pan while the chef rolls strands of rosemary, thyme, bay leaves and leeks together for the bouquet garni. Then we peel the skin off the pork belly and the chef folds it into a bundle before adding it to the pot. In a different pot, huddled under their fat as it melts away creating receding icebergs, duck legs slowly turn tender. In goes garlic sausage and vegetable confetti. Suddenly Mir reveals his trump card: a fragrant veal stock he’s been simmering for ages. 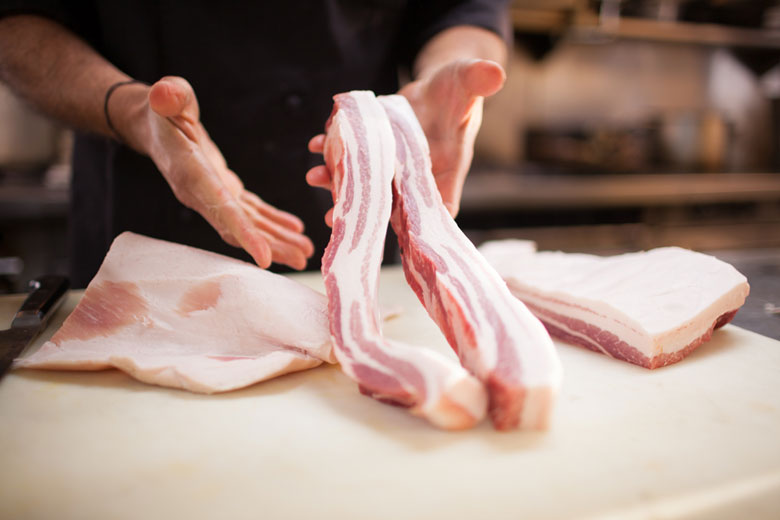 Only house-cured bacon for this Frenchman’s cassoulet.

There are now a dozen ceramic bowls on the counter, waiting their turn to be filled and sent on their way to stardom via a slow, warm oven.

It’s almost torture to wait by the fireplace but thankfully the chef takes pity on me and pours a glass of Gaillac Château Lastours 2011, a dark, pungent wine he often pairs with the dish. Night has fallen and when the cassoulet arrives, it’s as if there’s a light inside of it, shining under the bubbly ancestral dish.

Toulouse or East Quogue, who cares, Mir is home. 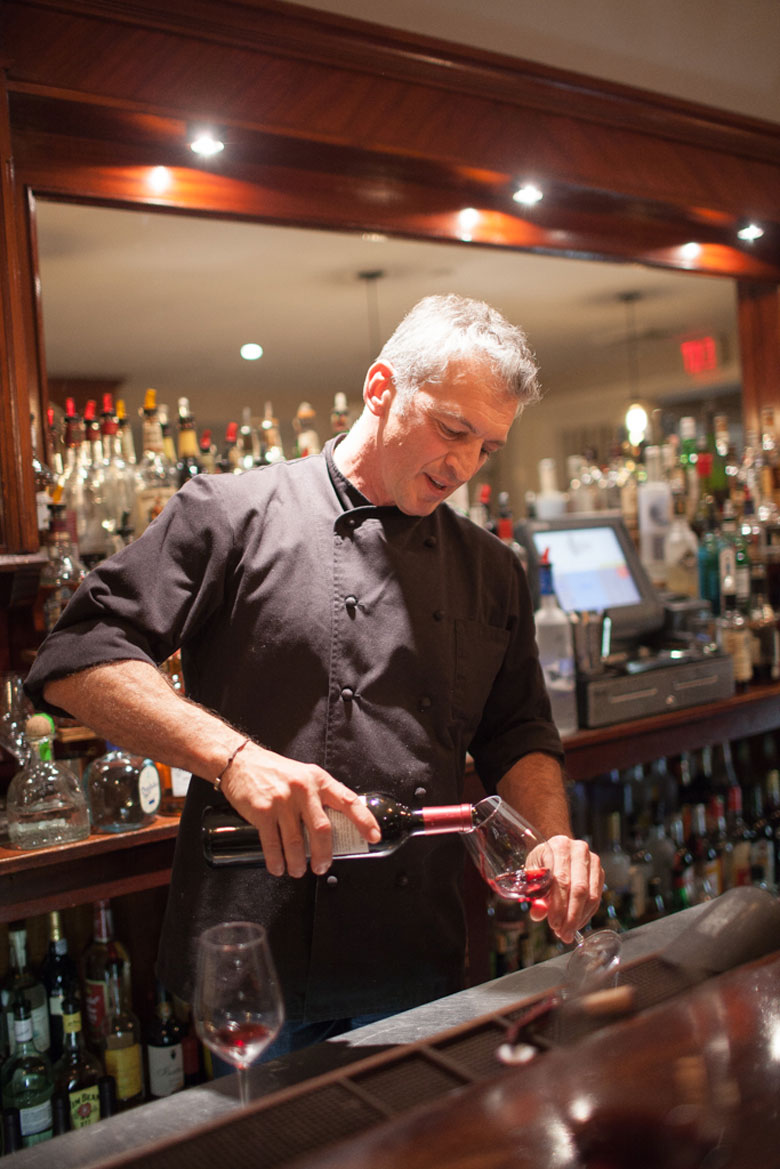 Wine from France’s Southwest goes in the glass.

For Laura Luciano’s cassoulet saga and a link to her step by step recipe, click here.