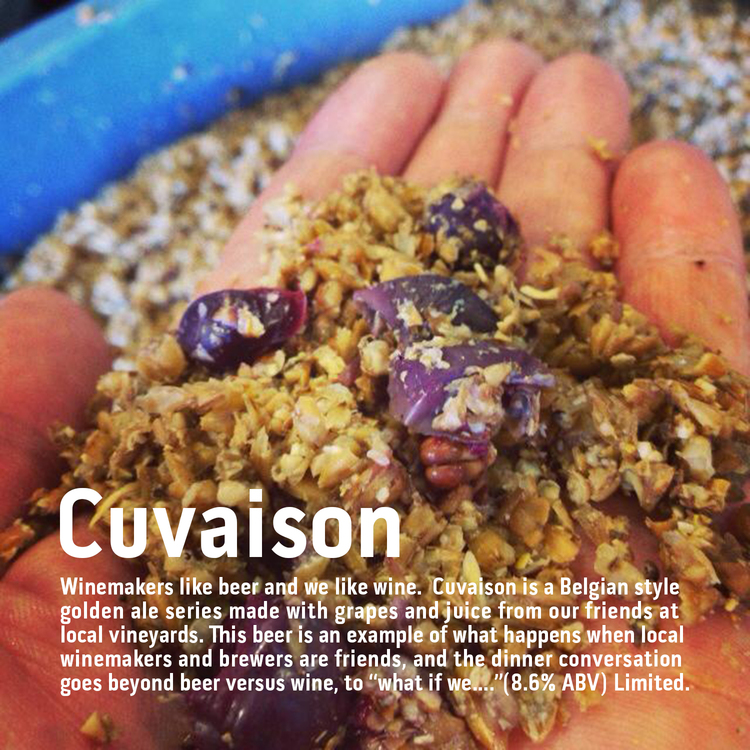 Loosely translating as a sense of place, terroir refers to the effect a region has had on the production of agricultural products. In the past such a thing was not possible in beer since brewery consolidation and expansion as well as environmental factors (like downy mildew) caused the closure of many malt and hop producers across the country. In fact, most malt used to brew some of your favorite beer is not made from grain grown in the United States. In recent years however there has been a shift, as in many things culinary, toward local ingredients. Large scale craft breweries like Rogue Ales in Oregon and Sierra Nevada Brewing Company in California cultivate their own hops and malt from which they craft beers expressing a sense of place. On a smaller scale, Greenport Harbor Brewing Company has taken the steps toward bringing out the terroir of the North Fork of Long Island.

Each year GHBC uses grape juice and fruit from a local vineyard to brew their Cuvaison, bringing a local quality to the beer. As a New York State farm brewery, GHBC has a license that requires their beer is made from at least 20 percent New York State grown ingredients (the percentage will increase as the years go on), Greenport Harbor not only includes local wine grapes and juice in their Cuvaison but also New York state hops and malt too.

Other Long Island breweries use grapes and wine barrels in production as well. We covered a few in a recent article in the Holiday 2014 issue.

“There are not a ton of all New York beers out there,” says head brewer DJ Swanson when we talked with him about Cuvaison. Each version of this Belgian strong ale is unique. It’s a beer that “captures the whole North Fork thing,” says Swanson. Co-owner John Liegey adds, “The thing I like about this series is that we do it with a different vineyard every year and it really kinda takes its own personality on with the vineyard that we choose.” The 2014 iteration of Cuvaison is a beer that definitely drinks with lots of personality.

This year Cuvaison was made with sauvignon blanc and chardonnay grapes as well as juice from Jamesport Vineyards. “We’re not the smartest guys, you know. It’s you look next door and, ‘Oh, a vineyard. Let’s do something with that,’ ” says Liegey. This is a beer the affable Liegey “sees” on each drive to the brewery months before it is brewed. “There’s the grapes like hanging from the vines when it’s nearly harvest,” he says. “They are asking for us to brew with them.”

Cuvaison 2014 meets the drinker with its distinct Belgian yeast character. In your mouth the beer express the white wine grapes used in its creation marrying them to the fruity and ester-rich yeast characteristics. The beer has a refreshing dry and bracing finish. Liegey is really happy with the 2014 version. “It kinda finishes with this good vinous thing at the end where you do kinda get the grapes pretty nicely and strongly,” he says, “but it’s super clean.” This Cuvaison appealed not only to us but our non beer drinking friends and family. With a lower ABV and overall lighter body than the 2013 version, which was brewed with merlot grapes and juice from McCall Ranch, this year’s edition could easily pair with food.

Cuvaison is linked to the local harvest as much as any wet/fresh hop ale. Variation will be seen based on weather and climate conditions in the finished ale. Cuvaison appears in the market place in limited quantities then is gone until next year but has, so far, never come back exactly the same. Could 2015 be the start of a new trend? “I actually think, ‘Wow this is maybe what we should look at next year to try and hit somewhere in this space’ because I see myself having that beer and enjoying something to eat with it,” says Liegey. Look for Cuvaison 2014 at finer eating and drinking establishments over the next several months. This is a versatile and engaging brew that captures a sense of Long Island and a bit of brewing terroir.