This fall, the bumper crops of scallops and figs led to a little recipe inspiration. • Photographs by Laura Luciano 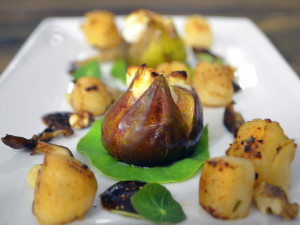 The bay scallop season has been underway on the East End and baymen are harvesting basketfuls of these sweet and tender mollusks. Do you think the polar vortex from last winter has something to do with the banner season we are having? Shellfishermen seem to think so, and so do I.  My father’s fig tree in East Quogue is having an impressive second harvest; 75 percent of the tree was damaged from last winter, and he was forced to cut it back. We thought it would not survive. As the weather got warmer, the tree grew exponentially, skipped the first harvest and began to produce ripe fruit in October (the second harvest typically happens in later summer) and is still going in November. In fact, last week, I picked a little over three dozen figs.  Everyone has a story about their fig tree. As Kelly Ann Smith, a contributor to Edible East End wrote in her article, A Berry Farmer Dips His Toes Into Growing Figs, “People go nuts over figs, and it seems like everyone has a story.” My father too has a story. We coined his The Almighty Fig Tree. 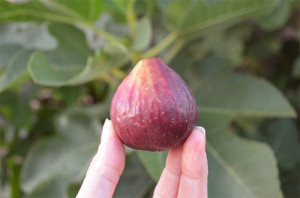 This year’s delay in the fig harvest combined with a spectacular start to the bay scallop season was the inspiration I needed to create something yummy.

The best way to eat a fig is straight off the tree. The same is true about a bay scallop; eaten raw it’s divine. Thankfully, I restrained myself and made a delicious dish that involves three simple recipes for one composed plate.

Visit Out East Foodie for the recipe.