Thankfully, every season is beer season. Sign up for our newsletter so you can enter to win two tickets when it goes out tomorrow afternoon. 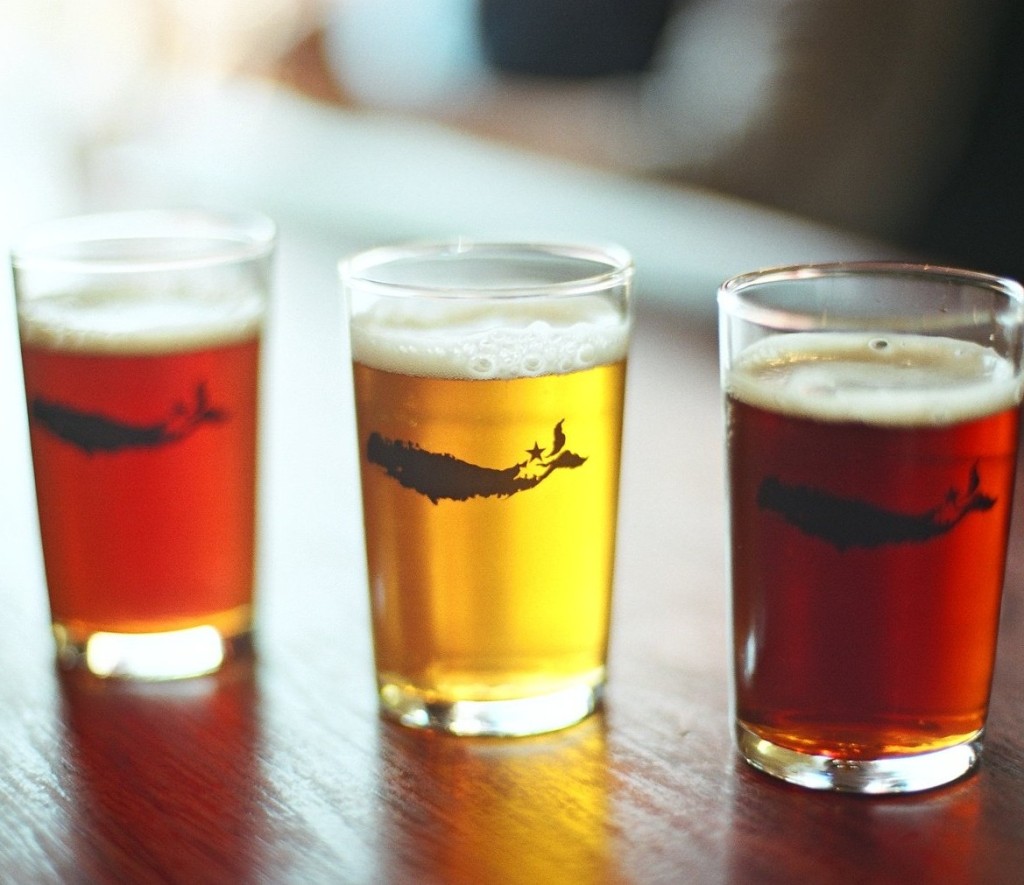 Hop over to the Parrish Art Museum for a craft beer tasting and networking on Friday November 21. Schmooze to your heart’s content while sipping on Long Island’s finest brewskies.

Lighthouse Ale is Fire Island Beer Company’s first beer, released in 2009. The amber ale has some caramel malt that give the beer a touch of sweetness.

Oyster Bay Brewing Company is bringing their Honey Ale, made with Bee Haven wildflower honey from Locust Valley. The honey adds a smooth finish but no sweetness. Oyster Bay also uses the honey, as well as local oysters in their stout, but we’ll have to wait until December for that one.

Greenport Harbor Brewing Company is working hard to produce a 100-percent local brew, working with local hop growers. Fresh hops, considered wet, must be used within a day of harvest. The freshness of the wet hops’ oils enhance the aroma and flavor and are intended to be drunk as fresh as possible. Hence their most recent Wet Hop Harbor Ale sold out in two weeks. More typically, hops are used after they’ve been dried.

“This year we have planted wheat, rye and barley at Young’s Farms in Mattituck, which gets us one step closer in our goal of using all local ingredients,” says Justin Wesnofske of GHBC.

Their regular, American-style Harbor Ale, brewed with wheat malt and a blend of warrior, glacier, and cascade hops will be served at the Parrish, as well as their 2014 Cuvaison.

“This season we paired up with our friends from Jamesport Vineyards and brewed a Belgian-style golden ale featuring chardonnay and sauvignon blanc grapes and juice, 100-percent New York state grown malt, and whole leaf Chinook hops from North Fork Hops in Southold,” Wesnofske says of the Cuvaison. This beer was featured in Edible’s Holiday 2014 issue.

With that said, much anticipation surrounds the company’s new Peconic restaurant, Eleven Mile, where all proteins and produce will be locally sourced within 11 miles of the brewery.

“We will be pouring our Octoberfest and Imperial Porter for Friday night’s event,” says Southampton Publick House Brewmaster Evan Addario.

“Our Octoberfest is a traditional German lager. Brewed with four different types of malted barley and two different types of hops, all imported from Germany. This beer abides by the German purity law with only four ingredients used in production: barley, hops, yeast and water. To give the smooth, crisp, slightly malty sweet flavor, this beer goes through a six-week fermentation process with a specific German yeast strain.”

The dark Imperial Porter, stronger than average beer, is derived from English porter but brewed in the Baltic region. The sweeter, more robust flavor, has a higher alcohol content than the more traditional, easier drinking English porters.

“The flavor profile is a strong, smooth, slightly sweet robust beer with notes of caramel, chocolate and toffee. There is a light hop bitterness that balances out the sweetness without overpowering the balance. Nice for a cold winters day,” says Addario.

I was lucky enough to taste an early small batch of a brew, made with strawberries from Amber Waves, at the farm, when the Montauk Brewing Company was just starting out. I knew then they were going places. It seems like every restaurant on the East End serves their now iconic yellow Driftwood Ale cans.

“We have brewed small pilot batches using local ingredients, just not for commercial consumption yet,” says founder/brewer Vaughan Cutillo, “When our new brewhouse is installed in early January 2015, we will have the flexibility to brew with locally sourced ingredients should we want to.”

Their Hop Blond Ale will also be poured. “A crisp hop finish sets this blonde ale apart from the rest,” says Cutillo. “A balanced beer with a light straw color, this is a great beer for every season.”

Thankfully, every season is beer season.

In between sips, the Golden Pear Cafe will provide seasonal hors d’oeuvres. When your mouth isn’t full, trade a few business cards with other people in the community and perhaps make a new friend. We have a long winter ahead.

Take advantage of a guided tour of the museum’s special exhibitions, Alan Shields: In Motion and Steven and William Ladd: Mary Queen of the Universe, while you’re there.

Festivities begin at 5 p.m. Tickets are $10 for members and $20 for non-members. If you become a business member now, get four tickets for free and a lot more benefits for the year ahead, like free museum admission and discounts in the cafe and gift shop.

Sign up for our newsletter so you can enter to win two tickets when it goes out tomorrow afternoon.