The island’s signature vegetable is perfect for the holidays. • Photographs by Lindsay Morris 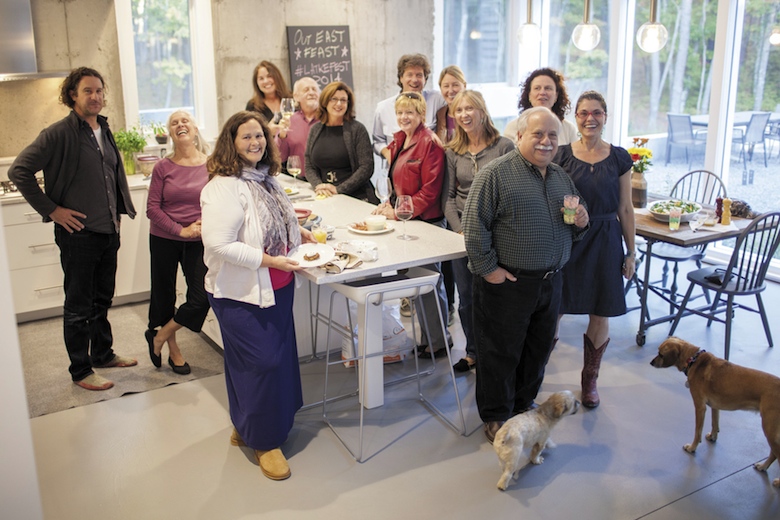 What does an Italian girl like me—a shiksa— know about latkes? Before I did a bit of digging, I knew it was a grated potato-onion pancake made during the eight days of Hanukkah. Last year, the holiday fell on Thanksgiving, and “Thanksgivuk-kah” was coined. People from all over the world were noshing on unorthodox latke versions like pumpkin, maple syrup and candied pecan or sweet potato latkes that sandwiched a turkey burger. Most grandmothers would say, “It’s a meshuggaas.”

But my ancestors are more closely related to the latke than you’d think. Latkes were originally derived from the Italian ricotta pancake and became part of the Hanukkah culinary tradition because they combined two popular symbols of the holiday: fried food and dairy, according to food historian and cookbook author Rabbi Gil Marks of The Encyclopedia of Jewish Food.

I learned that traditional latke making is every bit as temperamental as making homemade fettuccine. Too much liquid? They fall apart. Add matzo meal? Purists say no. The controversial decision to chop or grate the potatoes—and even the onion— has everyone kibitzing, especially Jason Weiner of Almond restaurants in Bridgehampton and Manhattan. “Don’t even think to use the food processor to grate the potatoes and onions,” gasps Weiner, a first-place winner of Latke Festival at the Brooklyn Academy of Music, for his potato latke with house-smoked bluefish, goat yogurt and dill. Weiner recalls his grandmother grating the potatoes and onions by hand. “My grandmother’s latkes invariably had pieces of her knuckle in there,” he says. She would add a pinch of salt and then put the mixture in a kitchen towel and take one side, and someone took the other side, and they would twist in opposite directions until all the moisture was wrung out. He adds, “My grandmother was not satisfied until the towel ripped or one of us cramped up.” 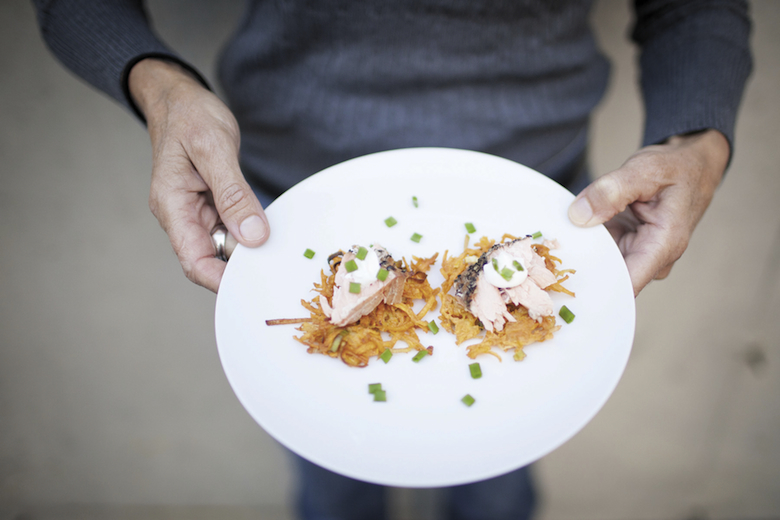 For my first latke ever, I followed Grandma’s cue, with a slight twist. I grated the onion and potato—the old-fashioned way—and soaked the potatoes in salt water for five minutes. This seasons the potatoes and keeps them from browning. I then drained the grated potatoes in a colander and placed them in a cheesecloth (I find that easier to twist than a towel, sorry Gram) with the onions and wrung out the liquid thoroughly. I added the eggs, salt and pepper and some fresh thyme. That’s it! Schmaltz is historically used to fry latkes; I used duck fat. It is a perfect culinary match for potatoes, enhancing their earthy flavor and imparting a golden crust: creamy on the inside and crispy on the outside. Cast iron works best for beautiful frying because it keeps the oil temperature stable. Latkes provide the perfect foundation for an array of sweet and savory toppings. If you want to dish up a Hanukkah miracle of your own, try pairing your latkes with caviar, cranberry relish or even a poached egg. And if you want to schmooze with Jewish grandmothers, keep it simple and top with sour cream and applesauce.

COOK: Hold on for Hanukkah, when we’ll present you with a new latke recipe every day in 8 Days of Latkes.