What if our four magazines united, like family around a holiday table, and printed one giant feast of an issue featuring stories from across the region? 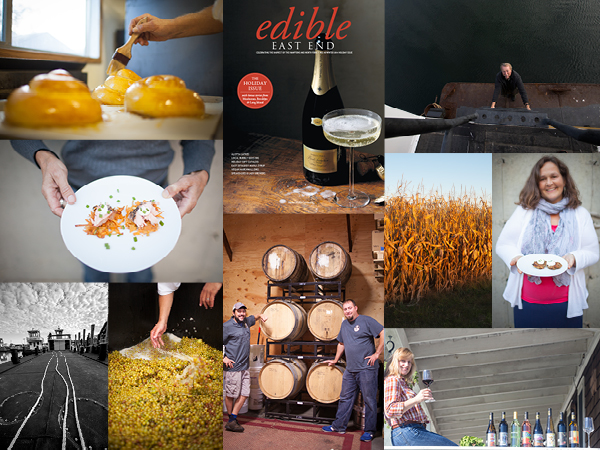 It’s nearly a decade since our publishers launched Edible East End, one in a handful of related publications celebrating place-based taste. Since then, nearly 80 Edibles have sprouted across the continent, celebrating small-batch bakers, conscientious carnivory, backyard bees, foraging and fermentation from sea to shining sea.

Meanwhile Edible East End grew and, over time, spawned three siblings—first Edible Brooklyn, then Edible Manhattan and, one year ago, Edible Long Island. Like a family scattered from Midtown to Montauk, we editors enjoyed catching up over a meal now and then, but have each been busy tending our home fires and making our own magazines.

But when the holidays come around, even the busiest families get together. And this year, we had an idea: What if our four magazines united, like extended clan around a groaning table, and printed the magazine version of a turkey with all the trimmings—one giant feast of an issue, featuring Edible stories from across our region?

As we considered the possibility and sketched out the editorial menu, we realized how much crossover our content already has. Like stories about Long Island grapes made into Brooklyn wine. About a Brooklyn chef making Hamptons chocolates. Or East End oysters shucked and slurped in the city. Long Island potatoes cooked into Brooklyn latkes. Brooklyn furniture-makers-turned-farmers whose pork now graces urban tables. Sparkling wine made on the East End and poured in Manhattan. A Hamptons challah that’s worth the drive from the Upper West Side. Or a new-old Brooklyn landmark called the Long Island Bar.

These are just some of the tales we decided to share across territories and combine into the quadruple issue you now hold. I hope reading it feels like a long holiday weekend with extended family, one where twin sisters and distant cousins catch up while grating nutmeg and rolling dough, hearing about each other’s hometowns while talking with mouths full and then shaking up another round of cocktails.

Pull up a chair, won’t you?