A sustained effort by a Bridgehampton farm family brings a Jewish bread to the East End. 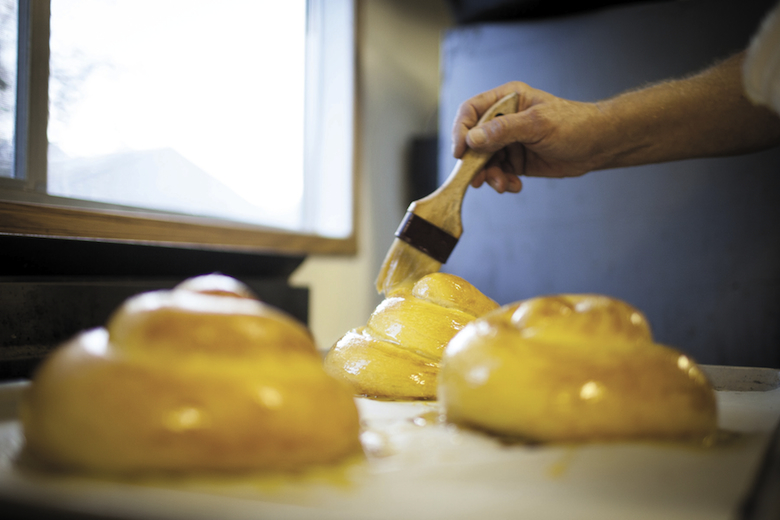 “We can do better,” says Water Mill farmer Harry Ludlow to no one in particular. He wasn’t talking about potatoes or zucchinis, pigs or cows. No, Ludlow, whose English Protestant roots can be traced to the first settlers of Bridgehampton in 1656, was daydreaming about challah, the traditional egg bread eaten on Sabbath and the Jewish holidays.

“We had been selling challah at the [Fairview Farm] farm stand for years,” he says, “but then I finally tasted it, and there was no ‘wow.’”

When Ludlow gets an idea, he has been known to follow it through to the nth degree. “He is a doer,” says his wife, Barbara. So the next day, he set to ask a few customers if they would be interested. The response was enthusiastic.

One brought a family recipe, another listed all the challah-making tricks she had gathered over the years, and a third decided to bring a different bread from the city each week, for research purposes.

“In the Biblical times,” says Hanniel Levenson, associate rabbi and director of education at the Jewish Center of the Hamptons, “’challah’ was the word for ‘portion,’ and people were expected to give a portion of their dough to the temple. It wasn’t until the Middle Ages, in Austria, that the local bread was named ‘challah’ and adopted as the bread of the Sabbath.”

Last January, Ludlow was able to carve some time for a bit of R&D. He plunged in, digging his hands in the dough. Soon the whole family embraced the challenge. There was analysis and there was practice, sometimes in front of YouTube. Barbara and their daughter, Meredith, famous on both forks for her buttery fruit pies, learned to braid. “But how many strands did we need?”

“We made bread by hand every week for three months,” says Ludlow, “and every time, we tweaked the recipe or the process.” They analyzed the feel of the dough, its elasticity, stickiness and how much flour to add. Because the process felt completely new, “We built history and depth, so we could recognize what wasn’t right.” They relied on each other for critique on flavor, sweetness and texture. “We tried to merge our modern sense of taste with the traditional recipes.”

“We had to learn to pronounce it,” says Barbara.

They settled on six strands, chose to use their own duck eggs for the crucial egg wash and proceeded to grind the flour themselves. “It makes the bread a bit coarser,” says Ludlow, “but crunchier.”

Knowing handmade bread was impractical on the scale he needed, Ludlow created a viable production model, so he trained a team of three and started using a massive mixer. Baking started at 5:30 a.m.

Finally in April, when the farm stand opened with eight loaves, Ludlow thought they were ready. “We had no idea,” he says.

“Do you have whole wheat?” asked a customer. Raisins? Sea salt? Soon they wanted seeds and even chocolate chips. And they had to start from scratch again when the Ludlows learned High Holiday tradition called for round breads to signify continuity.

‘We used to bring the challah from the city every Friday,” says Suri Kasirer, a mother of three who lives in Manhattan and Southampton, but last summer she pushed ahead to Bridgehampton to get Ludlow’s bread. “It’s the best I’ve ever tasted. I wondered if he had studied some-where with a little ol’ lady.”

It got to the point where Ludlow had trouble keeping up with the demand. “The word is out,” says Kasirer. But as with most of what he encounters, Ludlow’s philosophical about it. “What’s amazing,” he says, “is that before January, I had never touched dough. It’s a miracle.”

COOK: Stay tuned for a challah recipe from Emily Love of the North Fork.