Where imagination meets reason and the unpredictable happens. • Photographs by Randee Daddona 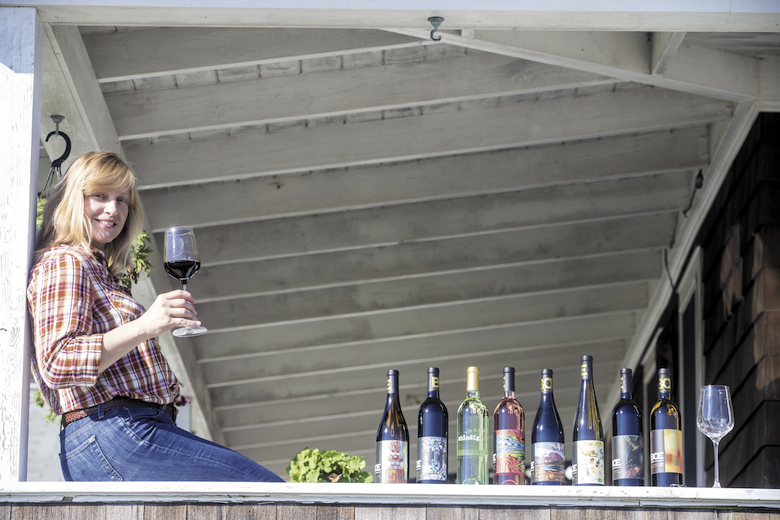 “Hmm, let me see… ” says Alie Shaper, musing over the wine cases in her kitchen. We’re at her weekend cottage on the North Fork, and I’m curious to see what she chooses. Shaper owns Brooklyn Oenology, her wine label /tasting room/wine bar in Brooklyn, and the plan is to taste, talk, and taste some more. She pulls out an orange-style 2012 Gewürztraminer and a red blend, the 2010 Motley Cru. Interesting, I think, two very different wines. On the porch, the late afternoon sun sparkles on the bottles and a cluster of wine glasses, and in the distance, the wind pushes sailboats along the Peconic Bay. Shaper opens the Gewürz and pours.

“Oenology” means the study of wine, and discourse thereof. Winemaking is a duality; it’s a technological and scientific discipline, yet also an art, a classic Apollonian pursuit. Wine must be examined through the senses, and this invariably leads to the understanding that the purpose of wine is to drink it. And when stars align, wine’s lauded synergy with good food and company gives rise to magic. Exit Apollo; enter Dionysus, the god of wine and its mysteries, in divine symmetry.

Yet, in winemaking as in all things, nature is really in charge.

In Michael Pollan’s book The Botany of Desire, he argues that any attempt to bring control over a natural system will result in disorder, and embracing the variables of nature is the path to harmony. This plays out in Shaper’s wines; they spring from where imagination meets reason, and the unpredictable happens.

The 2012 Gewürztraminer is fermented and macerated on the skins. The orange style is rare; not everyone gets it, and that makes it a risk for a winemaker. “It’s not quite white, it’s definitely not red, and it’s certainly not rosé,” Shaper says. I taste, and think, “What?!” The floral nose delights, but then in the mouth, it’s crisp and bone-dry. There’s a hint of oxygen contact from vigorous punch-downs, and peachy flavors, nuttiness. At the finish, a lush creaminess blooms. Did the wine go though malolactic fermentation? That can be desirable in a complex white, and it’s usually deliberate.

“I’ve wondered that myself,” Shaper says. “I think it might have. I don’t know; I didn’t test it.” There it is; a spark of natural disorder in this careful construct of a wine.

Cheese and charcuterie appear, and the gewürz pairs perfectly. It turns out Shaper has her own dualities; she’s quirky and creative, yet methodical and observant. She’s a Renaissance woman and a total geek. After studying engineering at Cornell, she worked in the mid-1990s in Silicon Valley. “I like science and how it speaks to the imagination,” she says, but not the prospect of a lifetime engineering widgets. She fed her wine bug at the Napa/Sonoma wineries; then wine sales/marketing jobs led to a new life in Brooklyn, where, out walking one afternoon in 2005, she had a eureka moment. “It was like a lightning bolt,” she says. “Brooklyn has art, music, food and a real sense of community. I realized that it was going to be all about this artisanal identity. It has a brewery; why can’t I have a winery?”

She took an internship at Premium Wine Group in Mattituck. “I did the night shift in the cellar, and all the crap jobs!” she says, laughing. “I was like; this is so cool!” She made her own blends, designed labels and a logo inspired by Leonardo da Vinci’s Vitruvian Man, and launched Brooklyn Oenology (BOE) in 2007. By 2010, she opened the tasting room/wine bar with manager TJ Provenzano. BOE has wine classes, a wine club and CSA, as well as food and wines from around New York State. “This creativity partnership, from the agricultural to the culinary to the visual, is a celebration of our part of the world,” Shaper says.

Next, we taste the 2010 Motley Cru, with its cast of characters. “Motley Cru is an accidental success,” Shaper says. “I thought, what an amazing year for merlot. I have some great syrah, some petit verdot and malbec…. There is no plan; I see what the vintage gives us, and then I play.”

The color is red-violet, and the aromas are blackberry and brambles, with an earthy edge. It’s medium-bodied, with a definite spiciness from the petit verdot. On finish, something sneaks up—that’s a note of white pepper from the syrah, Shaper says. When she blends, she says, she imagines the wine as a geometric form that must be in balance. She makes dozens of different ratios, and the final choice is not too this or too that but just right; in the Goldilocks zone of wine, as it were. “It’s not quantifiable. I know it when I smell it,” she says. So, what is the blend, exactly? The 2010 Motley Cru is 57 percent merlot, 19 percent syrah, 14 percent petit verdot, 5 percent malbec and 5 percent cabernet sauvignon. Many good winemakers hit upon similar ratios when blending reds. There’s the dominant grape, a harmonizing grape and the bit players. We’re well into our tasting now, and this might be a flight of fancy, but it occurs to me that the blend in the 2010 Motley Cru closely mirrors a special ratio, one seen in nature everywhere; order from chaos, creating harmony— the golden mean. How did that happen? But actually, when you have an inspired winemaker like Shaper, collaborating with nature, the question really is: Why wouldn’t that amazing ratio arise?

LOOK: To learn more about the art that decorates BOE’s bottles, click here.