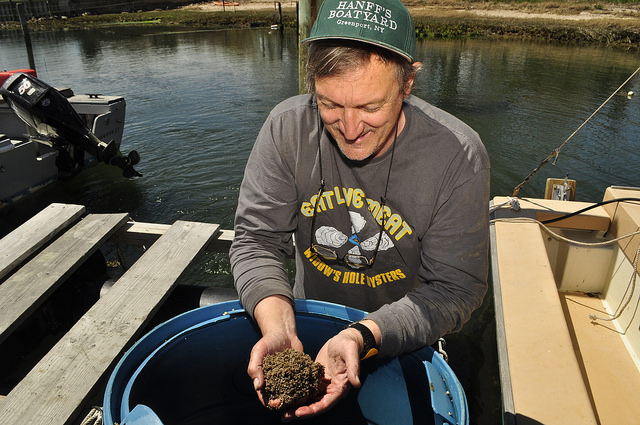 Mike Osinski of Widow’s Hole Oyster Company with a handful of spat or baby oysters.

Why not load the last LIRR train leaving Greenport for Penn Station each night with fresh East End produce for a brand new farmers market?

It’s an idea Greenporter Mike Osinski of Widow’s Hole Oyster Company says he’s been pitching to any willing ears for years. “They’ve always lost money on that train because its empty; they’re always complaining about it, and I’ve run it by the head of the MTA who said the conductors don’t have the time — or whatever— to load in boxes, but porters could easily be hired for that job,” says Osinski, adding he believes a farmers market would not only help East End farmers fetch a metropolitan premium for their wares while providing New Yorkers with locavore goods they crave, but would also improve the area’s less-than-desirable reputation because “nothing turns a place around like a farmers market.”

As a former city slicker who retired to the East End only a few short years ago following a successful career selling securitization software to the money-minded, Osinski says he’s witnessed such a transformation.

“I used to have my office in Union Square, and when I first started my software company, my wife wouldn’t walk through Union Square at night,” he says of the Manhattan landmark during the mid-90s. “Then they put the farmers market in there and suddenly it was the hottest place in town.”

Osinski isn’t the only one who thinks the idea is a grand slam. The oysterman had already left the farmers’ forum held at J. Kings cold storage facility in Calverton last week when Congressman Steny Hoyer of Maryland commented on the plan.

“I wish that gentleman who was talking about using the train for produce hadn’t left,” the Democratic whip of the U.S. House of Representatives said at the forum. “I think it’s a great idea.”

Osinski has since sent Hoyer a detailed pitch about the plan, which he hopes will help the plan gain politicial traction. “I can go to any airport in this country and give them a box of shellfish with gel packs and they’ll take it, put it in a cooler and onto a plane and when it arrives to its destination, they’ll take it off the plane and the chef will come and pick it up,” the oysterman says of how much easier it’s been for him to ship oysters across the country than simply up-island. “I can do that at any airport, why won’t the train?